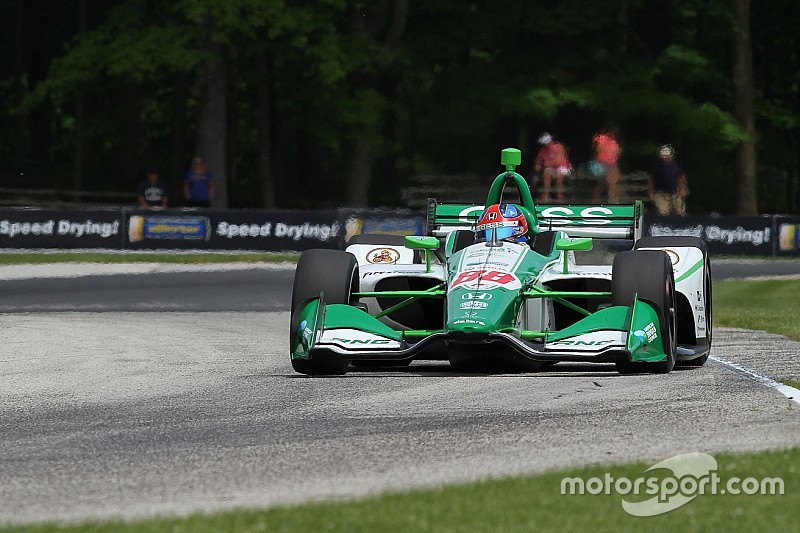 As well as praising his Harding Steinbrenner Racing team for the gradual improvement in his car at Road America over the course of the weekend, IndyCar’s youngest ever polesitter Colton Herta also gave props to his semi-teammates at Andretti Autosport and the Road To Indy program.

In today’s qualifying session, Herta edged out Andretti Autosport’s Alexander Rossi by 0.1771sec to take pole in only his 11th IndyCar start, while back in late March, he became the youngest ever race-winner in Indy car history with victory at Circuit of The Americas, his third start.

The 19-year-old praised his HSR crew for improving the car over the course of four practice sessions for this weekend’s REV Grand Prix at Road America, stating: “The guys have been working so well this weekend. The car has been on point every session… well, not completely. Actually I hated the car in the first session! But we slowly made ground, made it better, and I think for sure we had the best car today and it showed.”

He then praised the Andretti Autosport team with whom he and Harding Steinbrenner debrief and exchange technical information and feedback.

“[Rossi] helps me out quite a bit, [as does] Ryan Hunter-Reay, being the experienced driver in the team. Obviously I can take a lot from them. When I can, I try to give it back to be helpful both ways.”

Asked whose data best matches his own, he said: “Probably Hunter-Reay. Rossi is wild! I'm sure you guys have seen his moments and his pedal map is really weird. There's a bunch of whole different weird things about his driving style that shouldn't be fast, but are extremely fast.

“Even in the race he's driving the same and not wearing the tires more than anyone else. It is quite incredible.

Remarking on his swift adaptation to IndyCar, Herta gave credit to the Road To Indy scheme and his learning years in Indy Lights.

“It’s extremely important,” he said. “I think the main thing is just getting to see the tracks before you get to IndyCar. You get to see most of the tracks – you're racing on I think 10 weekends of the IndyCar schedule…

“[IndyCars and Indy Lights cars] are actually pretty similar to drive. Cooper does a good job with their tire [in Lights] and the balance of the car and the technique of the driving isn't too far off.