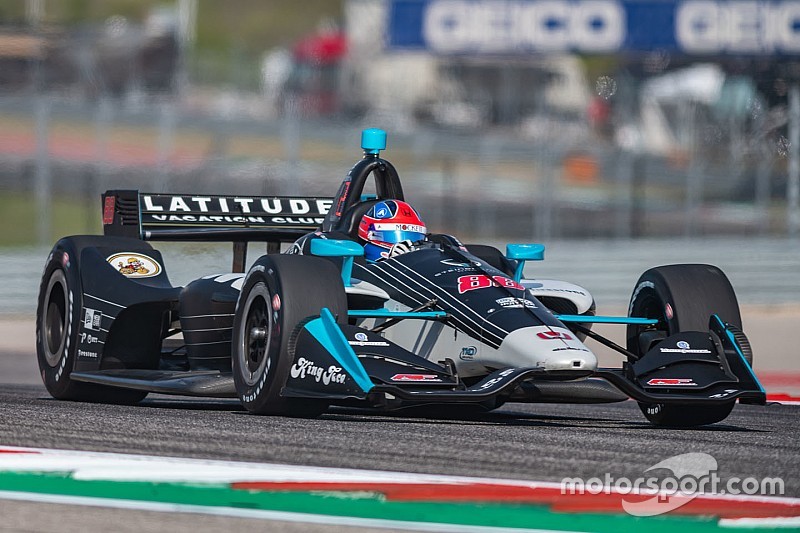 Colton Herta, aged 18 years, 11 months and 25 days, became the youngest ever winner of an Indy car race at the Circuit of the Americas, as strong pace and perfect strategy allowed him to benefit from misfortune for Will Power and Alexander Rossi.

Team Penske-Chevrolet’s polesitter Power led every single lap, with Rossi in close attendance, until the race’s only full-course caution – caused by a collision between James Hinchcliffe and Felix Rosenqvist that left the rookie’s Ganassi-Honda stranded at the entrance to pitlane – closed the pits.

Power, Rossi and Scott Dixon were yet to pit and under caution the field packed up behind them, so they were passed by every unlapped runner. Power’s day got still worse when a suspected driveshaft failure left him stranded in his pitbox.

New leader Herta, who had been running a strong third, well clear of fourth-placed Josef Newgarden, left his pursuers behind at the restart and reeled off the final laps without issue.

Rossi recovered to ninth after the restart, while Jack Harvey completed the top 10.

Polesitter Power made a strong start, and Rossi had to get defensive to keep Andretti Autosport-Honda teammate Hunter-Reay behind, while Herta swept across from the outside of the track to claim third from his semi-teammate.

Dixon, O’Ward and Newgarden all got around Rosenqvist – Dixon by driving around the other side of the outside Turn 1 curbs.

Rossi challenged Power into Turn 1 on Lap 3 but the leader protected the inside line and held him off through Turn 2, and carried on lapping in the 1min50s.

Ericsson stopped on Lap 7 to change from used primaries to new alternates, and Hinchcliffe, who’d picked up three spots at the start pitted on Lap 8 for used reds, and Bourdais pitted his DCR-with Vasser-Sullivan-Honda to grab new reds.

By this time Hunter-Reay had fallen off the back of the top three by Lap 8, 3.5 seconds behind Herta.

Newgarden pitted from seventh to grab used reds at the start of Lap 9, just as teammate Power started stretching his lead over Rossi to two seconds. O’Ward, Rosenqvist, Ferrucci pitted on Lap 10, while Hunter-Reay came in on Lap 11 and fel behind Newgarden who’d been flying on his new tires.

Herta pulled in from third place at the end of Lap 12 to grab a set of used blacks, and he produced a brilliant out lap to sweep around the outside of Rossi who, along with Power and Dixon had stopped on Lap 13, but unlike Power and Dixon, had picked up a set of fresh reds.

When black-tired Rahal, who had briefly cycled into the lead, made his stop on Lap 14, he emerged under attack from Hinchcliffe who easily nipped past on his warm reds, while O’Ward then set to work on the RLLR car and demoted him after some thrilling side-by-side action.

Up front, Herta started inching up until he was within a second of Power by Lap 17, and the 19-year-old brought Rossi with him. The trio was now 6sec ahead of Newgarden who in turn was running 1sec ahead of Hunter-Reay.

In sixth ran Rosenqvist, who’d been unlucky to emerge from his first pitstop in traffic but he had to cede sixth to his flying compatriot Ericsson on Lap 19. A lap later, he had to do the same for the other Arrow SPM machine of Hinchcliffe, and at the start of Lap 21 O’Ward passed the #10 Ganassi machine into Turn 1.

Back in 13th, Rosenqvist’s teammate Dixon had also come out of the pits in traffic but he didn’t have the pace to carve through.

Rosenqvist gave up his struggle on Lap 22 and pitted, while Ericsson and Hinchcliffe pitted their Arrow SPM cars from sixth and seventh on Laps 23 and 24 respectively. When O’Ward had a slightly slow second stop on Lap 25, he rejoined behind Hinchcliffe.

Ferrucci, Bourdais and Hunter-Reay stopped again on Lap 26, and Herta – who had fallen over three seconds behind Rossi – stopped on Lap 27 as did the struggling Dixon. Hunter-Reay had emerged behind Ericsson who was now in fifth.

Power and Rossi stopped on Lap 29, and Rossi was able to rejoin ahead of Herta. Further back, O’Ward on red tires dived bravely past Hinchcliffe on blacks at Turn 15 to snag seventh.

As the race reached its halfway stage, Power on used reds led Rossi on blacks by 3.2sec and Herta was in Rossi’s slipstream and 6.2sec up on Newgarden. Ericsson was a further 4.5sec back but being closed down by Hunter-Reay, and into Turn 1 on Lap 32, the 2012 champion pushed the rookie back to sixth.

Ganassi’s troubled day continued with a brief spin by Rosenqvist at Turn 12, but the Swede was able to continue, albeit having lost four places and falling to 11th.

Power started falling back into the clutches of Rossi, and he was having to use his push-to-pass to try and stay one second clear, but Rossi had used almost twice as many so he too had to be careful with when he used the 1.65-bar boost.

Dixon was gaining a new lease of life in this third stint, and passed O’Ward and Ericsson in consecutive laps to move into sixth place by Lap 37.

Despite running on reds and blacks respectively, Power and Rossi each had a set of fresh red tires left and they ran a second apart, but 10sec ahead of Herta who was struggling to keep his reds alive. HSR pitted its rookie, as Penske pitted Herta’s nearest competitor, Newgarden.

Suddenly the race was turned on its head: a full-course yellow with the top three – Power, Rossi and Dixon yet to stop. Hinchcliffe had struck the the back of Rosenqvist’s car as they approached Turn 20, dueling for tenth place, nerfing the Swede into the inside wall and puncturing his own left-front tire.

When the pits opened with 15 laps to go, Power, Rossi and Dixon trailed down pit road, but only Rossi and Dixon re-emerged: Power’s #12 Penske Chevy was stuck in pitlane with suspected driveshaft difficulties.

For the restart with 10 laps to go, Herta would be leading Newgarden, Hunter-Reay, Rahal but fifth- placed Ericsson was sent to the back of the field for being sent out into Spencer Pigot’s Ed Carpenter Racing-Chevrolet. That elevated O’Ward into fifth ahead of Bourdais, Andretti and Ed Jones.

Herta nailed the restart perfectly and although Rahal made an attempt to get around Hunter-Reay for third, the Andretti Autosport driver prevailed and started closing on Newgarden.

Bourdais powered past O’Ward on the back straight to snatch fifth, while further back, Rossi made hard side-by-side contact with Simon Pagenaud. No action was taken by race control, and Rossi continued to stride forward with a pass on Dixon with seven laps to go.

By then, Dixon had been investigated for blocking a pass on Veach on the front straight that left Veach with a broken front wing, but the five-time champion was cleared of any wrongdoing.

Herta seemed to effortlessly maintain his gap over Newgarden at three to four seconds, as the 2017 champion was watching his mirrors for Hunter-Reay’s menacing presence. The move never came, and Newgarden couldn’t close on Herta, and so Colton ran out the winner by 2.7sec, leading two series champions and the previous youngest ever IndyCar winner past the checkered flag.

On the penultimate lap, Andretti passed O’Ward for sixth place but was too far behind Bourdais to make further progress.

Dixon says he hasn’t “got the flow” around COTA