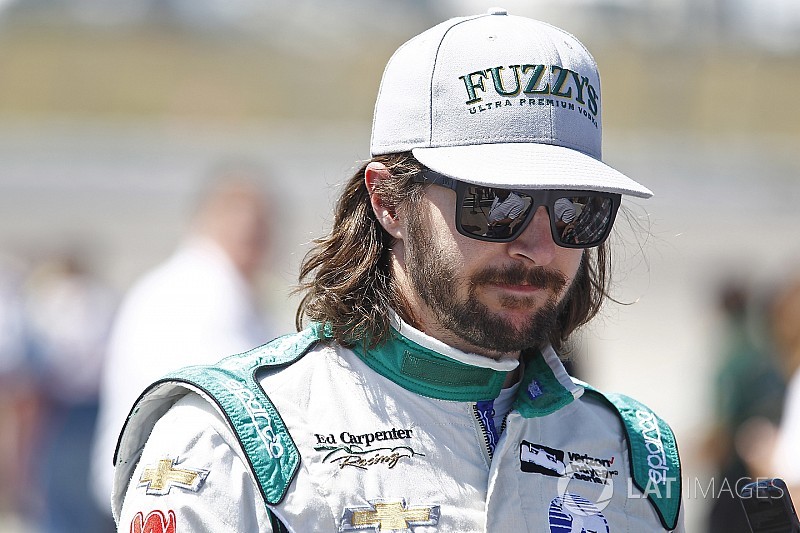 JR Hildebrand said he had a race-winning car at Iowa Speedway but under the circumstances of the final stint, was happy to equal his best-ever IndyCar finish.

After qualifying second following a crash in opening practice session, Hildebrand’s Ed Carpenter Racing-Chevrolet led 38 laps of the Iowa Corn 300, having twice passed polesitter Will Power and once passed eventual winner Helio Castroneves, but had to concede best to the veteran Brazilian in the final stint.

Having discovered his car was stronger toward the end of a stint, ECR elected to stop him early for the final stint, and his fast laps on fresh tires vaulted him into the lead for the final stint. However, it also meant that his tires were more worn by the time Castroneves was able to box him in behind backmarkers.

The Californian said: “It feels good. I definitely think that under some slightly different circumstances we had a car to win out there. The guys made a great call to pit early and get out into the lead at the end and try to hustle all the way.

“I think if we'd been on equal tires with Helio we'd have had something for him there at the end - but all in all, really excited for the Fuzzy's Vodka crew to get on the podium again. They definitely deserved it after the weekend that we had.

“Hopefully this gets us kicked off for a stretch run going into the rest of the year."

Team owner and teammate for the oval races, Ed Carpenter, admitted he had positive and negative feelings having run with Hildebrand in the first half of the race, seen his other car finish second but suffered mechanical difficulties on his own car.

Carpenter said: “There are a lot of emotions after a day like today. I finished 12th and that's not what I came here to do. It's disappointing from that standpoint.

“Obviously, I'm happy for JR and the result he got for the team, but I'm also disappointed in my day. It's hard to get past those emotions.

“We don't totally know what happened; we definitely had a weight jacker failure which sure didn't help anything. Hopefully we'll be able to catch a break with one of my last two races this year [Gateway and Pocono] and get a good result, hopefully get a win. It's been too long."