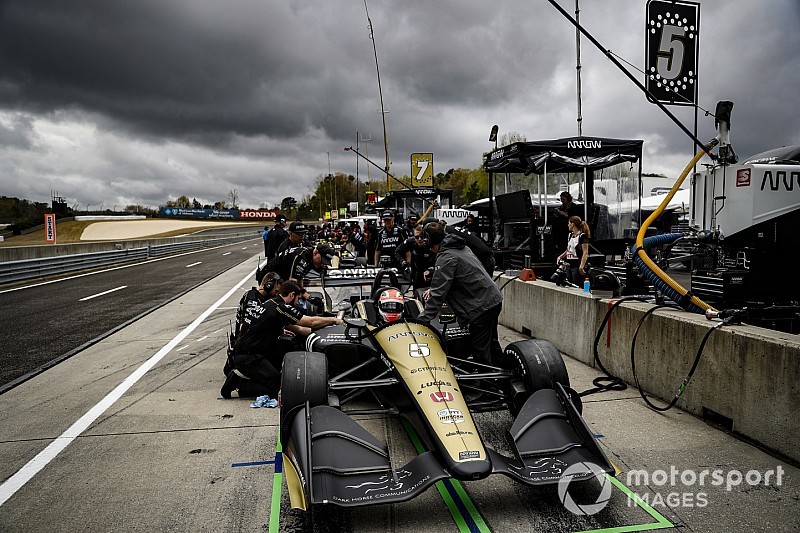 James Hinchcliffe led third practice at Barber Motorsports Park with a superb lap that eclipsed his nearest rival by three tenths of a second, but there were three more red flags.

A red flag with less than four minutes to go, caused by an off and stall for Graham Rahal at Turn 5, meant everyone was granted one flying lap at the end of the session, and it was Hinchcliffe who produced the startling time that sent him top.

If one side of the Arrow SPM team was happy, the other was not as the second red flag was caused by Hinchcliffe’s teammate Marcus Ericsson. Ryan Hunter-Reay had just had an off-course moment at Turn 2, reporting there might be something on the track on the exit of Turn 1, when Marcus Ericsson understeered off the track at the same spot and struck the guardrail hard enough to tear his left-front wheel loose and wedge his front wing in the barrier.

The first red was caused by Zach Veach who spun off at Turn 5 10 minutes into the session, collecting a lot of gravel that saw the team take the #26 Andretti Autosport-Honda back to the paddock for a clear-out.

Behind Bourdais, Scott Dixon nailed a good lap to grab third for Chip Ganassi Racing-Honda despite an oversteer moment under braking for T5, while Colton Herta put Harding Steinbrenner Racing car into fourth.

Simon Pagenaud was fastest Team Penske driver in seventh, while Will Power had two offs in one lap, one at Turn 5 and the other at T14. He would finish the session in 15th.

Felix Rosenqvist was eighth in the second Ganassi machine, while Max Chilton was ninth for Carlin-Chevrolet, two spots ahead of rookie teammate Patricio O’Ward, the pair split by Alexander Rossi.

The Firestone situation that caused yesterday’s red alternate tires to be slower than the blacks was clarified today. The batch of reds that had been brought to last year’s race and weren’t used (due to everyone needing to run wets) had lost some of their grip and were the reds utilized in yesterday’s FP2 session.

It means that the teams head into qualifying today without having run the newest reds, although they are built to the same specification as last year’s Barber batch.

IndyCar return to Japan would be “difficult”