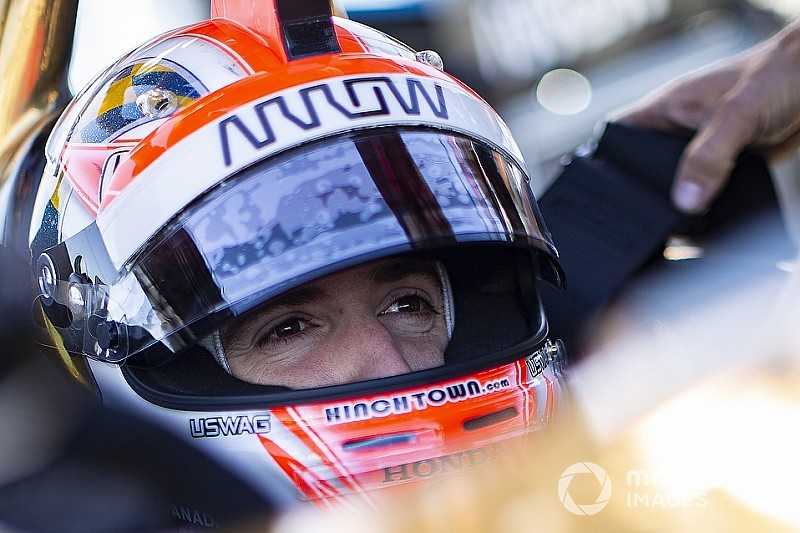 The Canadian star, who has six wins to his name including last year’s race at Iowa, finished the day 0.09sec clear of Andretti Autosport’s series sophomore Zach Veach, and 0.11 ahead of 2017 Indy 500 winner Takuma Sato.

“James was quickest in the morning and the afternoon, so it was a good day,” he told Motorsport.com. “We did around 80 laps with James and focused on validating a lot of the work we’d done in the offseason, which was improving on a couple of areas where we struggled last year.

“There were times when we could be quick but weren’t consistent with it. So while we want to unload well and compete for poles, we also need something we can race with, too. There were times in 2018 – Detroit, Long Beach for example – when we qualified well but we didn’t have a good racecar, we couldn’t keep the tires under us.

“So we’ve taken big swings at a couple of things to make a more predictable package and one that stays consistent on raceday.”

For Ericsson, who completed approximately 120 laps, it was a second chance to drive Sebring in an IndyCar, and while Kiel was highly impressed with the Swede in his first test last December, he said today’s run “posed a totally different challenge” due to circuit conditions.

“Typical Sebring – a completely different track than we saw last month!” said Kiel. “It was starting from square one for Marcus in terms of car setup.

“But that’s not a bad thing, because it’s important to us that he is totally comfortable in the car whatever the conditions. We want him to know what particular changes to the car will do and therefore what to ask for when we get to St. Pete, or Long Beach or Barber.

“So we did again what we did at his first test – set up a straightforward test plan with a lot of big-ticket items that we wanted him to feel. So it was less about lap time and more about getting him to a situation where he’s comfortable and can add some input on race weekends.”

Ray Gosselin, who is entering his 10th year as Ryan Hunter-Reay’s race engineer – despite rumors linking him to McLaren’s Indy 500 entry with Fernando Alonso – was also content with a day that saw Andretti Autosport put three of its cars in the top five.

“It’s always good to get back out there and test,” he told Motorsport.com. “You’ve had all these months to think about what you needed to improve upon and how you’re going to do that, and there are always going to be a few surprises that raise their heads. But that’s why we test, right?

“We’re reasonably happy with the lap times although there were development tires being run by some guys today, and it would have been nice to get on those to put a big lap time in. But I’m pretty happy with what we did.

“But whatever you’ve worked on in the offseason, whether it’s tire longevity or riding the bumps better, you still don’t know where you stand compared with the others until it counts. We’ll know a bit more when we get to the Laguna Seca test [Feb. 8] and Spring Training at COTA [Feb. 12-13] in terms of all the teams’ offseason gains.

“Certainly things we found in the offseason that we thought would be gains got positive feedback from all four of our drivers today, not just in terms of feel but also lap times. But… what has Penske gained? What has Ganassi gained? What has Coyne gained? There’s a lot of talent that wasn’t at the test today so you never know until the timesheet actually counts how well you did with your technical improvements.

“But that’s the fun part and that’s why we race.”

Although Sebring is renowned as the best representation of a street course available to IndyCar teams, and Andretti Autosport was already regarded by some as the team with the best streetcourse setups with the current IndyCar, Gosselin said the test today had been worthwhile.

“Hmm, well yeah, I think we did look strong at quite a few streetcourse races last year, but you can always get better,” he said. “Whatever sport you’re in, whatever aspect of your sport, you’re always striving to get better.

“In racing, it’s perhaps harder than some sports to quantify how much better you can get, you can still be honest with yourself and decide what your weaknesses are and put a plan together to improve.

“So there were things at every type of track – every track, in fact – that we felt we could do better, even when we looked very strong. And the encouraging thing about today is that we had a huge test list to get through, everyone had something a little bit different, but I think the major points we thought were going to be better were things that the drivers liked.”