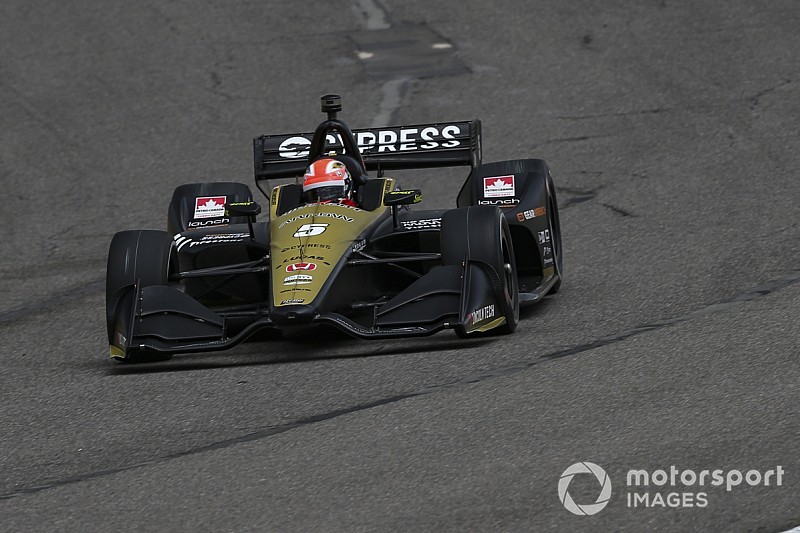 James Hinchcliffe delivered fastest time on alternate Firestone tires with the first sub-69sec lap of Barber Motorsports Park this weekend, with Circuit of The Americas winner Colton Herta in second.

Herta was among several drivers who didn’t feel that the Firestone reds were offering a lot of extra grip – possibly because the support series here have left a blend of Pirelli, Yokohama, BF Goodrich and Hankook rubber on the racing line.

Santino Ferrucci and Sebastien Bourdais put Dale Coyne Racing with Vasser-Sullivan into the top four, althoug rookie Ferrucci understeered off the course into the tire wall at Turn 15, causing a red flag but thankfully without hurting his car or wrists.

Marco Andretti (Andretti) and Scott Dixon (Chip Ganassi Racing-Honda) completed the top 10, ahead of the fastest Team Penske-Chevrolet, that of Will Power.

Zach Veach survived a wild moment at the Turn 8/9 chicane that collected a marker cone to put another Andretti car in the top dozen.

Marcus Ericsson was 14th in the second Arrow SPM-Honda, while Felix Rosenqvist harmed his chances of a Top 10 run with a long wheel lock-up into Turn 5 while on his alternate rubber.