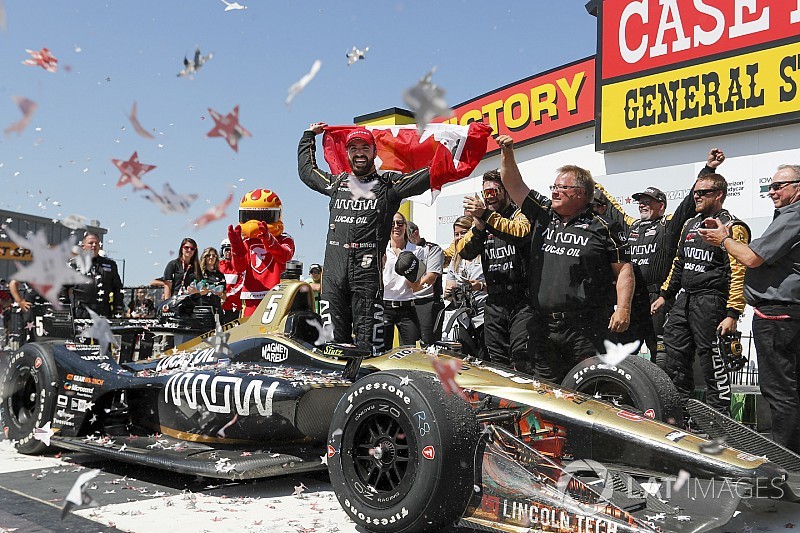 Iowa winner James Hinchcliffe admits there was a lot of discussion over the radio with the Schmidt Peterson Motorsports team regarding whether to pit under the final caution that fell on Lap 294 of the 300-lap race and stayed out to the checkers.

Hinchcliffe took the lead from hitherto dominant leader Josef Newgarden on Lap 256, and would hold it all the way to the checkered flag. However, when Ed Carpenter spun his car on Lap 294 and Takuma Sato knocked the ECR car’s front wing endplate onto the track, the yellow flags emerged. Some drivers – notably Newgarden and Hinchcliffe’s teammate Robert Wickens – went to the pits for fresh tires, but there wasn’t enough time to reorder the field and get back to green, so Hinchcliffe remained in front to the checkered flag.

Hinchcliffe, for whom this was the second Iowa win in six years, said: “It was like worst-case scenario, right? You're leading the race by a couple seconds, everything is good, like 10 laps to go, and you see a yellow come out. Based on what we've seen before, we saw it at Phoenix, we've seen it at Iowa in the past… we weren't totally shocked that people took [the opportunity to pit].

“But when we were doing the math in our head, I mean, there was still only a couple laps to go. We still had to get the lapped cars back through pit lane [for the wave-around] and we're thinking, ‘I don't even know if we have time to go green, and if we do, it might be like a green-white-checkered kind of deal, and I don't hate my odds if it's a lap, if it's two laps.

“It was a tough call, it really was, because we've seen it go the other way so many times, but ultimately the right call was made. And man, if we had pitted from the lead and it didn't go green again, I wouldn't have slept for a week. This is a bad week to not sleep going into Toronto because I'm very busy this week.”

Hinchcliffe, who qualified only 11th, said that the #5 Schmidt Peterson crew’s work throughout practice had been focused on a raceday setup.

“We were working on a good car over a stint,” he said. “We've won at Iowa before, and the key is taking care of your Firestones, the key is having a good car in lane 1, lane 2, being able to get through traffic, and that's ultimately what we did.

“We got through a bunch of cars in that first stint, got through a couple more in the pit cycle, didn't have as good a car in the middle part of the race, and Josef was just so dominant, I didn't think we had anything for him. I thought we were kind of running for second to be honest, and then that last stop, the aero crew just nailed it on the pit stop, gave us a really good change, and the car just came alive. The only reason I was able to catch Josef and ultimately get by him was just our ability through traffic. I think he was a bit quicker clean air.

“In the first stint, the car was really good. We just made a tiny change to try and dial in a little more understeer because it was pretty free in that first stint. We overshot it and had way too much understeer in the second stint. So as we tried to go back on it, we went too far, and we were really loose in the third stint, and so that's what allowed Sato to get by us. I caught somebody, wrong place, wrong time, got a big wiggle, set up the track, and he went by.

“That was when I was starting to panic a little bit because we still had about 30 laps left in the stint and I was maxed right on the weight jacker, max on the front bar. It was kind of dire straits for a bit. We were surprised how far the balance went for a relatively small change.

“So I just said, ‘Hey, the first stint was our best stint; let's go back to whatever we did there,’ and that's what we did, and the thing just came alive. We were able to run both lanes, and that's really what helps you when you come up on lapped traffic – and it's all about lapped traffic at a short track like this.”

Pigot’s first IndyCar podium a “weight off the shoulders”