Honda has reason to smile today after a 3-person panel at the IndyCar Series approved its request to make changes to a critical engine component.

The move should increase the Japanese manufacturer's competitiveness on the track as soon as this weekend at the IndyCar Sao Paolo, Brazil event scheduled to be contested on Saturday evening (April 28th).

The technical specification that permits Honda to make changes to the single turbocharger on its present HI12RT IndyCar V6 engine was ruled legal by the series two weeks ago at Long Beach, but a protest by rival Chevrolet initially prevented the move.

Chevrolet is deploying a twin-turbocharger design in the series for 2012 and has won all 3 races and poles in events so far this year.

The compressor device, specifically its cover, is the component that has been the source of the two makers' contention. A legality question concerning the ability of an engine-maker to change its design during the competition year became the focus of legal arguments over the contract signed by all the builders who are competing in IndyCar this year.

Hans Peter Kolieir, Jim Voyles and Jack Snyder heard the arguments from the two sides before rendering an approval for Honda to make the compressor change within the current contracts and rules structure of IndyCar.

"We are gratified that an independent panel has endorsed the original turbo ruling of April 18th," said Steve Eriksen, Vice President, Honda Performance Development. "The 0.74 A/R compressor cover for single-turbocharged engines competing in the series this year allows Honda to structure its changes within the engine regulations. The new compressor cover helps to offset a demonstrable performance disadvantage between single- and twin-turbocharged engines."

Experts consider the change good for ten to fifteen horsepower in increased power for the HR112RT, a welcome boost to the Honda teams laboring in the wake of the powerful Chevy engine. 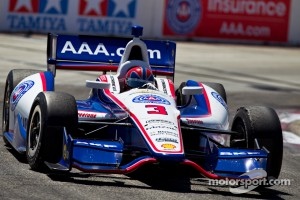 Chevrolet's argument to disallow the Honda change was put forth on the grounds that the engines had already been homologated, and that the series' regulations made no provisions for parity-based changes.

Chevrolet announced after the ruling that it would not appeal the matter further, bringing the controversy to a close. The company said in a statement that it would abide by the panel's ruling, and that it considers the matter closed., said in the statement that it is time to move on. "Chevrolet believed the modification was contrary to the applicable series rules, and asked IndyCar to thoroughly review the issue so that the rules were applied fairly," Jim Campbell, Chevrolet VP of Performance Vehicles and Motorsports said.

Simon Pagenaud ready for his 1st race in Sao Paulo