Having his best season start since his first IZOD IndyCar Series championship in 2003, Scott Dixon finished second Sunday at the Honda Indy Grand Prix of Alabama. It was the second consecutive podium finish for the Honda-powered Target Chip Ganassi Racing driver, following on the heels of his runner-up result last weekend at the season-opening Honda Grand Prix of St. Petersburg. 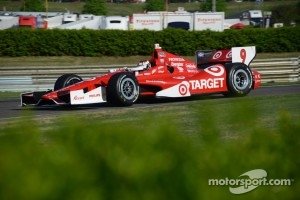 Starting on the inside of the second row, in third, Dixon moved into the lead following the first round of scheduled pit stops, then controlled the middle third of the race, while many fierce battles for position raged behind him. But Dixon’s lead disappeared on lap 65, when he was delayed by slower cars while entering and leaving the pits for his final stop, handing the lead to eventual winner Will Power.

Prior to the start of today’s 90-lap contest, Tom Ogata from San Francisco, California, received the ride of his life – as passenger in the Honda two-seat IndyCar driven by former Indianapolis 500 winner Arie Luyendyk – during the pace laps just prior to the green flag. Ogata won his ride by entering Honda’s “Fastest Seat in Sports” contest at www.shophonda.com.

Taking the checkers just over three seconds behind Power, Dixon still closed to within two points of early-season drivers’ championship leader Helio Castroneves, and was the first of three Honda-powered drivers in the top five.

Graham Rahal had his first top-five finish of 2012, and came close to his first podium finish of the year, as he hounded eventual third-place finisher Castroneves for the final 15 laps.

Simon Pagenaud also improved on his sixth-place finish last week in St. Petersburg, climbing through the field in his Schmidt Hamilton Racing Honda Dallara, from 10th at the start to fifth at the checkers. Mike Conway recovered from a minor “off” just after the final race restart on Lap 74 to finish seventh for A.J. Foyt Racing; while a last-lap pass of Marco Andretti saw three-time defending series champion Dario Franchitti round out the top-10 finishers for Honda today.

After back-to-back races in the Southeast to open the 2012 season, the IZOD IndyCar Series now goes cross-country, continuing in two weeks with the April 15 Grand Prix of Long Beach in Southern California.

Scott Dixon (#9 Target Chip Ganassi Racing Honda) started 3rd, finished 2nd: “I’m feeling a bit angry at the moment, but I guess it’s a good thing if you’re unhappy about finishing second! But this was our race to lose and somehow we managed to lose it. Coming in for my final pit stop, I was held up by a slower car on my ‘in’ lap and then by another lapped car after leaving the pits. I guess that was all Will [Power] needed.”

Graham Rahal (#38 Service Central Chip Ganassi Racing Honda) started 8th, finished 4th: “I gave [Helio Castroneves] a run, but the rules allow you to make a defensive move and that’s exactly what he did. I would have done the exact same thing had the situation been reversed. I tried him probably five times in all, but just couldn’t make it happen.

Simon Pagenaud (#77 Schmidt Hamilton Racing Honda) started 10th, finished 5th: “After starting 10th, this was a good recovery for us. We had a really good car today; I think in the closing laps we had the fastest car out there. This was a really fun race, with lots of passing, and a great crowd. It made the day very enjoyable for us, and I hope for the fans as well.”

Marc Sours (General Manager, Honda Performance Development) on today’s race: "What a great race! I think there may have been more action and passing this afternoon than in all previous IndyCar races here at Barber. Certainly, the introduction of new cars and the return of manufacturer competition to IndyCar racing has added a sense of anticipation to each green flag. This is a spectacular venue, and the huge crowd on hand seems to enjoy the spectacle. Congratulations to Scott Dixon on an excellent start to his 2012 season and to all our drivers and teams. We had three Hondas finishing in the top five today, and look for even better things to come in the races ahead. We’re interested in examining the engines from the cars of Takuma Sato and Charlie Kimball, to determine the exact nature of their issues. Constant improvement is one of the goals of our racing program.”