How Gateway hit a home run on IndyCar’s return 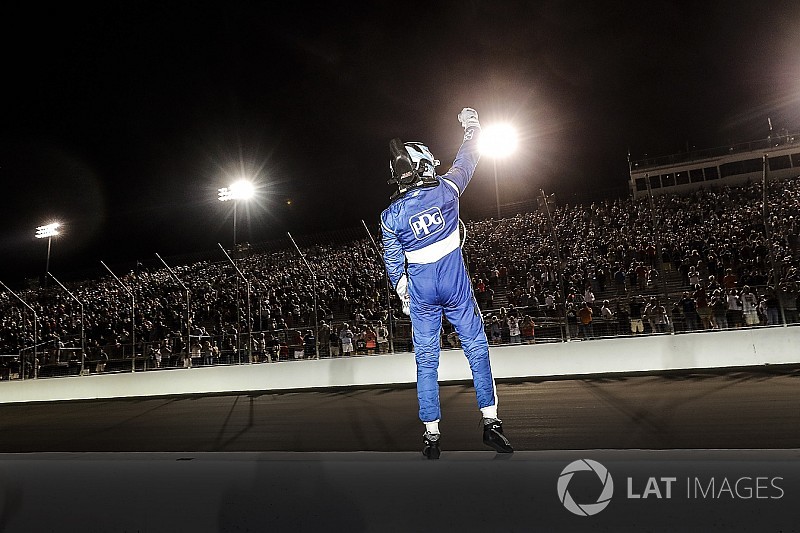 At a time when the Verizon IndyCar Series struggles to make an impression at ovals aside from Indy, Gateway Motorsports Park has returned to the schedule with a flourish – and a crowd.

The packed grandstands told the story at Gateway Motorsports Park on Saturday. Four hours before the green flag fell for the Bommarito Automotive Group 500, fans were three-wide filling the roads into the facility for IndyCar’s return following 14-year absence from the 1.25-mile track.

They weren’t disappointed. The new, slick surface proved challenging, even before the field completed the first lap. Tony Kanaan spun in Turn 2 on the pace lap and backed into the outside wall, his night ruined before it began. When the race finally went green, Will Power lost control coming out of Turn 2. Behind the wreck, Ed Carpenter and Takuma Sato touched while battling for fifth place and spun, with Carpenter’s car launching backwards over the nose of Power’s Penske entry.

It was hard to keep the fans in their seats after that.

“I’m a racecar fan,” Gateway Motorsports Park owner Curtis Francois told Motorsport.com. “And I’m a St. Louisan through and through — born and raised here. And to bring a new event that could be a placeholder in everyone’s calendar every year is huge for the area. It’s like having a guaranteed Cardinals playoff series each year.

“As we bring the IndyCar Series back to St. Louis – it’s the first time all the cars and stars are back in St. Louis. We hope to bring an event that is here to stay, longterm. We hope to take a page out of the Indy 500 book and try to build our speed festival as well as all our support for the race.”

IndyCar could not have hoped for a better show. In preparation for the event, the series tested at Gateway three times – and it paid off. Jay Frye, president of competition and operations for IndyCar, predicted the action would be racy with the current package. Frye, an Illinois native, believed that bringing another IndyCar race back to the Midwest is important for the sport.

“This was a great opportunity to come back to Gateway,” Frye said. “One of the biggest reasons to come back here is Curtis Francois. They’ve done a phenomenal job. He’s far over-delivered everything he promised – and he promised a lot.”

Scott Dixon, who finished second on Saturday night and raced in the last IndyCar race held at Gateway in 2003, echoed the sentiments of most of the competitors.

“It's fantastic to come back to the track,” said the four-time champion. “I was here in 2003. Crowd didn't look like that. It was nice to come back and see the effort that everybody has put in from the IndyCar side to the promoter here, to show that we can come back to these places, put on a good race, and get people in the stands.”

The effort wasn’t lost on team owner Roger Penske either. Walking down pit road prior to the start of the race, Penske admired the capital improvements, the infield suites running behind the pits and the fan-filled stands along the front stretch.

“Curtis and [John] Bommarito as a team have done a terrific job,” Penske said. “It takes someone that has racing experience – as Curtis has as a driver – so he understands what the requirements are for the teams and certainly understands the operations.

Gateway’s midway behind the grandstand featured a state fair-flavored atmosphere with a variety of food stands for fans. Closer to the pedestrian tunnel, hospitality tents lined the stands with easy access to the pit walk. Any guest with a ticket had access to the infield and could view the inner workings of pre-race.

Rock bands entertained guests from the sponsor tents and fans milling around between races. And race sponsor, Bommarito Automotive Group, not only used its reception area to entertain guests, the area’s largest car dealer lined up its latest offerings in a makeshift showroom in front of the tent.

Does the ‘win on Sunday, buy on Monday’ philosophy still apply when a local dealer aligns with a national event? John Bommarito, president of Bommarito Auto Group, says the exposure is invaluable.

“Not only do we have a Honda and Chevrolet business, we have 20 franchises total,” he replied. “We’re not only a regional strong brand now, with the opportunities with the internet, people are logging on and we’re the region’s largest automotive website, right now. When people log on to the internet to look for a car, up pops Bommarito.

“By working with IndyCar and Gateway Motorsports Park, this is the first of many events to come. This is a historic event, bringing IndyCar to St. Louis in a big way. We’re going to continue on with that momentum and the awareness is going to build. That will help Bommarito and bommarito.com become household names. When you think about a car, you’ll Google it and there it will come.”

The community embraced the event as well. On Tuesday, Carpenter threw out the first pitch at Busch Stadium for the Cardinals vs. Padres game. Thursday, Graham Rahal and Carlos Munoz dined with media while additional drivers made appearances around the metro-St. Louis area then showed up to sign autographs at Ball Park Village prior to the start of the Cardinals game. On raceday, Grand Marshal Jackie Joyner-Kersey led an all-star cast of local celebrities lending support to IndyCar’s return.

“St. Louis is a great sports town and the interaction we have between the Blues, the Cardinals and now the racetrack is tremendous,” Francois said. “There’s so much interaction. We all are trying to do the right things for the city, so much cooperation there.

“You can see it in the results. So many people are helping us pull this rope together. We don’t have success like we’ve had in this city, promoting this as quickly as we have with engagement across the city, if we don’t have fans, participants, community leaders and IndyCar stepping up to make this a world class event.”

Yes, there was a void when the Rams left for Los Angeles, but even as the 11-time MLB champions played just across the Mississippi River, 40,000 fans gathered to celebrate America’s top open-wheel series. And Francois is just getting started.

“Our long-range goal is to fully utilize the facility,” Francois said. “The facility is capable of hosting a Cup race, an Xfinity race, IndyCar — and really this city can support all of that type of racing.

“As this race has shown, we were able to get behind a race and make it happen. Right now, we are focused for the next couple of years on making sure that we provide a great experience for IndyCar here, a great experience for the fan. But nothing is off the table. As we’ve invested in the track, it’s ready to host the biggest and best racing.”

Newgarden not apologetic for pass on Pagenaud

Rossi "doing due diligence” on all Honda IndyCar teams