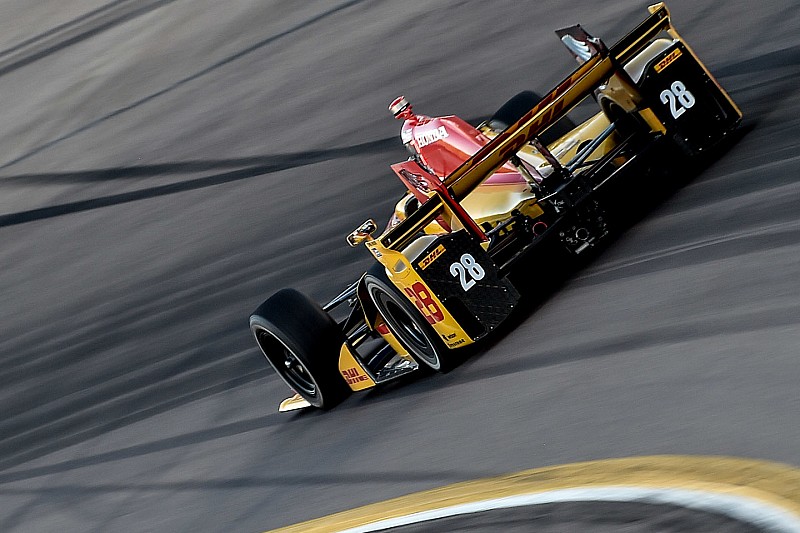 Hunter-Reay went from 12th to seventh on the first lap, and made places on every restart thereafter. However, the caution periods for the crashes by Carlos Munoz on Lap 120 and Ed Carpenter on Lap 196 came as the #28 Andretti Autosport-Honda pitted, dropping him to the back of the lead lap each time.

His race engineer Ray Gosselin told Motorsport.com: “Ryan was absolutely dialed in, making moves and we had the car to do it. At worst I think we should have been second. That’s what Ryan deserved.

“But what do you do? A bad break here and there and it just snowballs from there.

“Even after we had the bad break when Carlos had his problem, we came all the way back to fifth. And then another yellow comes out as we pit, and we’re doomed.

“It’s just unfortunate timing. It would have been a completely different day for us if that didn’t happen.”

Hunter-Reay fought back to eighth over the first 30 green-flag laps of the final stint. However, a passing attempt on Max Chilton’s Ganassi-Chevrolet saw the Andretti car slide high, lightly clip its rear wing on the wall and drop to 10th.

Said Gosselin: “Yeah, the thing at the end was just Ryan trying for everything he’s got instead of settling for eighth. That’s typical Ryan – he always fights no matter what we are up against. That’s why I like working with him.”

Gosselin admitted he had been heartened by the performance, but gutted by the result.

“On the one hand, it’s encouraging that we were able to get up and try and make something happen, like in St. Pete [where Hunter-Reay finished third]. In another respect, it sucks that we weren’t actually able to make anything happen.”

Chevrolet in a different class

Although Hunter-Reay was the top-running Honda for most of the evening, Gosselin said that in terms of beating all the Chevrolets, the odds were stacked against the HPD cars.

“They [Chevrolet] are head and shoulders above us,” he remarked. “There are two different classes out there. You know, in the first stint, I think we were the only Honda in the top 12. The difference is pretty clear…”

Asked if this week’s test at Indianapolis Motor Speedway could yet provide encouragement for Honda teams, in that the HPD superspeedway aero kit may be closer to Pratt & Miller’s than their respective road/street/short-oval kits, Gosselin was non-committal.

“The thing is, who knows what people are doing at the test, or any test, for that matter? You can never be sure what other teams’ gameplans are, what level of downforce they’re running, and so on.

“The only time you see the true picture of who’s fast and who isn’t is in qualifying, when you know everyone’s going as fast as they possibly can. So next week if there’s five Hondas and five Chevys in the top 10, there could be something funny going on.”