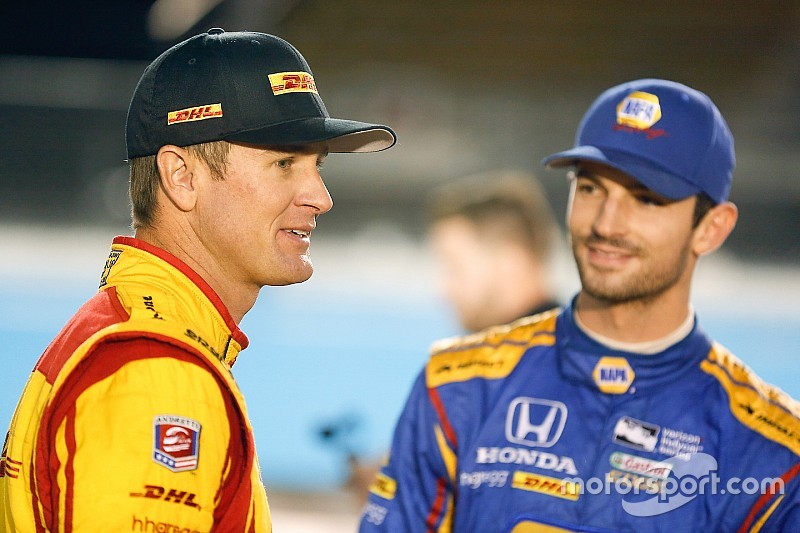 Ryan Hunter-Reay admits that with his own championship campaign having faltered, he’s just going for race victories – but will also do what he can to help Alexander Rossi bring the IndyCar title back to Andretti Autosport.

Hunter-Reay, who won the 2012 IndyCar title after a close battle with Team Penske’s Will Power, won at Detroit this year – his first win for almost three years – but has suffered multiple misfortunes elsewhere. The latest was his now infamous collision with Robert Wickens at Pocono which launched the Schmidt Peterson Motorsports car into a vicious crash and left the Andretti car with extensive damage.

The result is that Hunter-Reay now lies 119 points behind championship leader Scott Dixon, while Rossi is only 29 adrift of the Chip Ganassi Racing driver.

Asked when he would start playing wingman for Rossi, Hunter-Reay commented: “We're definitely still in the fight, at least for the top three. The championship? I'd have to win from here out and these guys have a really bad few weeks, no doubt. It's still possible, but it's a far stretch.

“We're concentrating on just getting race wins. That's what it's been all year, and that's what we're focused on. Obviously Alex and I have worked really well in the past together. We always have. If there's anything that we can do in the final stretch to bring the Andretti Autosport team back to being champions here in the Verizon IndyCar Series, that's our ultimate goal.

“We had a pretty good run going this season and the past couple weeks have been tough for us, but we still have some good strong races ahead, and hopefully we can both make a run for it.”

For his part Rossi said that the team was “not looking at wingman scenarios right now” but said he appreciated the knowledge he’s gained from Hunter-Reay.

“I would say the majority of what I've learned in this series has come from Ryan,” said Rossi, “so I attest a lot of things, especially on ovals, to what he's explained to me and taught me and demonstrated. I think we work well together and we're both fighting for race wins and working together to try and make that happen.

“I still need to win races. Scott is not – as I've said many times – going to have a bad weekend, so we're still quite a ways out, and the only way to close that gap is to win races. We're not looking at wingman scenarios right now, we're just both trying to build fast racecars to go win races.

Rossi paid tribute to his other two teammates, Marco Andretti and Zach Veach, for letting him lap them at Pocono last weekend and making life harder for his adversary, Power.

“I think that Marco and Zach were awesome for me in Pocono,” he said. “I came up to lap them, and they made my life really easy. Unfortunately Josef [Newgarden, Penske] was right in front of them, so he made my life difficult to try and help Will!

“I think that that's really the extent of what you're going to see – if [a teammate] is having an off day, they'll try and make your life as painless as possible. But in terms of anything beyond that, I don't really have any scenarios to answer that question or previous experiences to fall back upon. He [Hunter-Reay] is the one that's won a championship, not me.”