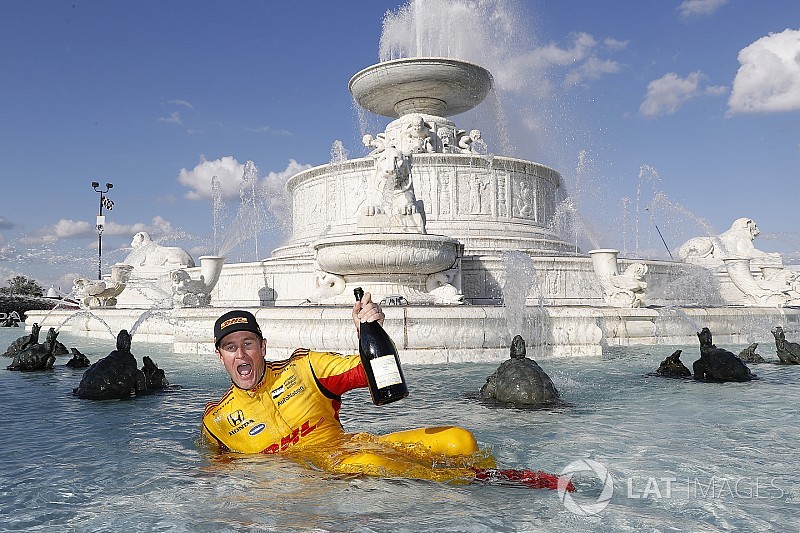 Ryan Hunter-Reay, whose win in Detroit has elevated him to fourth in the IndyCar championship standings, says the #28 Andretti Autosport team is committed to trying to win a second title.

On the streets of Belle Isle today, the 2012 IndyCar hampion scored the 17th victory of his career but his first since Pocono in 2015.

He now lies just 20 points behind teammate Alexander Rossi, who he pressured into a crucial error on Lap 64 as he charged onto his tail following his third and final stop.

“After I took my second set of blacks [primary tires], I started getting in sync with the car and the balance started coming to me,” the winner told ABC after beating runner-up, Penske-Chevrolet’s Will Power, by over 11sec. “I was really worried in the beginning because I was really loose.

“As I got into a rhythm, the car was doing everything I needed it to, everything.”

Speaking of his final stint as he reeled in the two-stopping Rossi, who had started from pole, Hunter-Reay added: “When we started that last stint, Rossi was more than a straightaway ahead of us, I couldn’t even see him and I just put my head down and the thing was flying. It was such a great car.

“I’m so happy for the #28 DHL-Honda team. I wish my wife and the boys were here with me because they’re the best.

"This has been a bit of a long time coming and that was going to be a heck of a fight at the end there, but a good thing we pressured [Rossi] into it, and we’re here in victory lane. Awesome.

"This car deserves to be where it is right now, that’s for sure – a heck of a car, heck of a strategy, great [crew] in the pitlane, and I drove my rear end off.”

Speaking of his efforts to get around his teammate, Hunter-Reay said: “I was really strong out of Turn 2 and he wasn’t, so I kept pushing the [push-to-pass] button and I knew I was going to get a run on him sooner or later, I just had to be patient with it.

“I was going to try inside, outside, and then I saw the puff of smoke once, twice, and I knew I had to keep pressuring him there. Once you see that monkey up in the tree, you’ve gotta keep shaking it! And he fell out.

“[Rossi] did a great job and he’s been so strong. This weekend was really tough on the brakes. I locked up a few times and almost went [into the run-off] like he did.

“He’s done a fantastic job this season but this #28 team, it’s their challenge and I’m absolutely going for this championship. It just goes to show we’re here to stay.”

The championship points sees Power hit the top spot once more on 309 points, ahead of Scott Dixon (Ganassi) on 304, Rossi on 298, Hunter-Reay on 278 and Josef Newgarden (Penske) on 270, despite finishing only 15th.