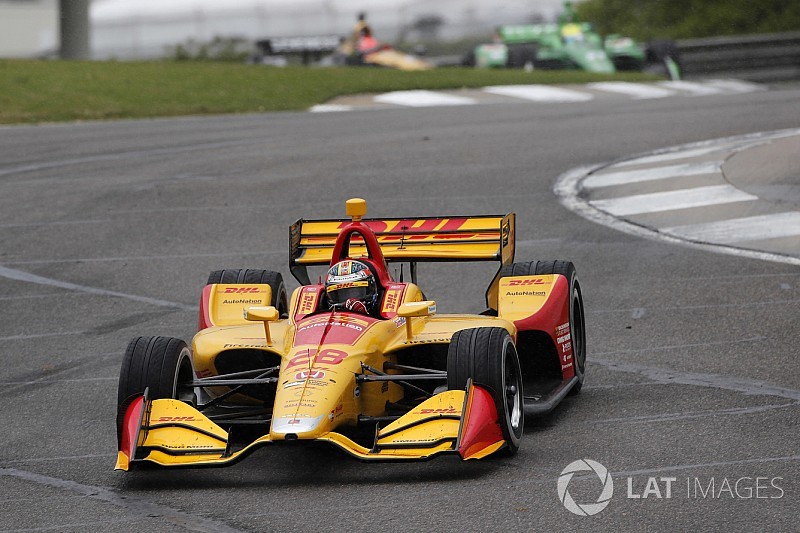 Ryan Hunter-Reay, whose second place at Barber Motorsports Park leaves him sixth in the IndyCar points, says he’s relieved to have had a “drama-free” weekend, but is impatient to start winning again.

The 2012 series champion and 2014 Indy 500 winner has not won an IndyCar race since August 2015, but qualified fourth and finished runner-up at Barber, and now lies 45 points behind championship leader and Barber winner Josef Newgarden.

Hunter-Reay believes that had there been more laps he might have caught Newgarden who had slightly hurt his wet front tires with an early switch.

The slick-shod Andretti Autosport-Honda had passed the wet-tired Penske-Chevrolet while Newgarden attempted to nanny his rubber, but eventually Hunter-Reay also had to stop.

He said: “[The team] were saying ‘Do you want come in?’ and I was saying ‘I’m fine, what do you want me to come in so early for?’ All I could see was the moisture on the visor, little bits of [water] dispersing across the visor. The track seemed OK, it was tough to tell.

“Then all of a sudden I had a few big snaps coming out of Turn 5, and I said, ‘Yeah we better come in’… I think we came in at the right time, looks like [Sebastien] Bourdais stayed out a little too long. We had great rain pace, we just needed more time.”

Regarding when to stop, Hunter-Reay later explained: “I think Newgarden was right on the cusp. Had it gone another three or four laps, he might have been in trouble with the time he pitted because it was still a little bit dry when he took his rains.

“We were coming there at the end. I think we had really good rain pace, catching Newgarden by a bunch every lap, but just a little too late.”

Hunter-Reay, who might have tripled his Indy 500 win tally had he not been collected in a pitlane incident in 2016 and suffered engine failure in ’17, said he was optimistic for next month at the Speedway and his longer term prospects in the championship.

“This is the first weekend where we haven’t had a problem and we finished second,” he said, “so it’s a nice relief. Hopefully we can keep this momentum rolling. The points are tight right now so that’s good, and we’re looking forward to the month of May.

“Hopefully we can be strong. We haven’t been on track one day yet at the Speedway [with the new-for-2018 aerokit], but we’re looking forward to that next week. It’s gonna heat up pretty quick.

“All in all [this was a] great weekend for the team. We rolled off with a car we weren’t really happy with, kept chipping away at it, making it better, and like I said no problems in qualifying and no problems in the race and we finished second.

“So I’m relieved with the result but obviously we need to get back to winning.”