“I knew it would be a pack race,” says Power after wild Texas round 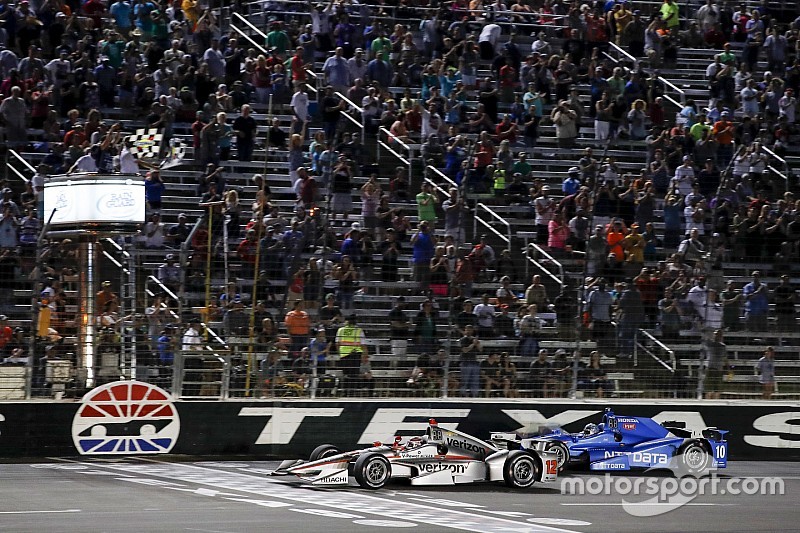 Team Penske-Chevrolet’s Will Power says he warned the series that the revised Texas Motor Speedway would produce a pack race as the tires weren’t degrading enough.

Power won the race having led 180 of the 248 laps, but there were a mere five cars finishing behind him on the lead lap due to several multi-car wrecks.

“I told the series, I texted Jay Frye, ‘This will be an absolute pack race.’ I didn't say whether that was good or bad, but I absolutely knew it would be a pack race.

“There was no doubt in my mind. Anyone who didn't – I mean, the first time we ran here, I said, yeah, this will be a pack race.”

Asked why most of his rival drivers hadn’t foreseen that cars would be able to run side by side for a whole lap – including throughout the revised Turns 1 and 2 – Power said that’s because they hadn’t tried the higher lane in practice.

“They didn't go up there,” he said. “Some did, but it's just so obvious that once the rubber goes down, there's just a lot of grip. It just gets better and better and better. It was so obvious to me, and anyone who said it wasn't going to be… I can't see how you could not see that.”

Power said the lack of tire degradation was the main culprit because it meant that the drivers remained full throttle all around the lap and throughout the stint, so there was no particular defining difference between each car/driver combination.

“I like tire degradation so at least you can work on the car,” he said. “It's fine to do that in the first half of the stint, you know, for 10 laps, but I think there needs to be a bit of [tire] falloff to create some separation.

“You know, when we're doing it every week, people got good at [pack racing]. They learned to give some respect and understood it. When you just do it once a year… I know it all happened behind me, but it gets pretty intense.

“What happens is distance matters. You actually don't take a racing line, you take the shortest line around and that's the quickest way because there's no limit. We just hugged the white line. That's how it was when I first turned up in [Indy Racing League] in 2008.”