“If Newgarden joins Penske and Ganassi switches to Honda…” 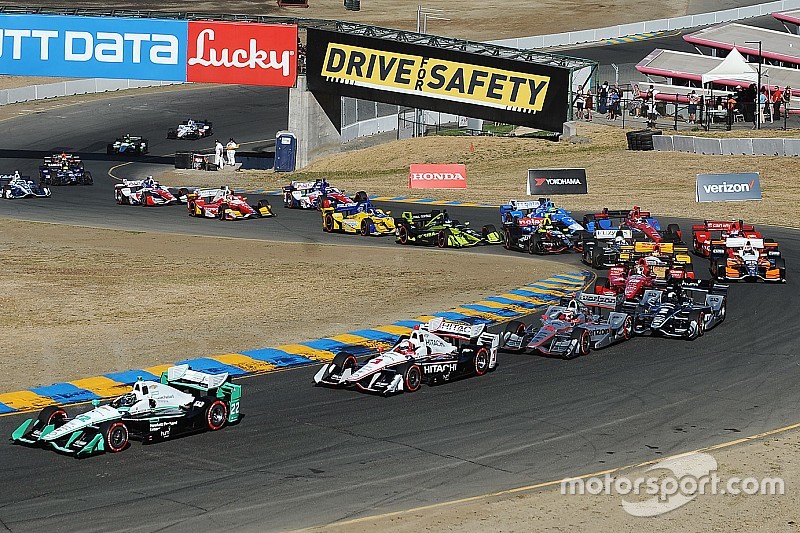 Since our August silly-season update regarding who goes where in 2017, some circumstances have changed. David Malsher tries to separate fact from fiction – and then throws in some speculation.

The rumor and counter-rumor mill has been hard at work in IndyCar the past couple of weeks. And the theories have gotten a little bit out of control. My favorite was that Alexander Rossi will stay at Andretti Autosport to stay ‘in’ with Honda, so he’ll get a McLaren-Honda Formula 1 offer… Yup, logic that holds water like a colander.

The late Justin Wilson, while going through one of his own career debates a few off-seasons ago, found much amusement in the speculation from we media types.

“Don’t overthink it,” he grinned. “The crazy ideas are just dreamt up by people with too much time on their hands. They come up with these great big theories based on one thing that’s wrong. And it just gets more and more wrong the more it gets built up!”

So the dull and predictable theories are usually the right ones?

“Exactly. There just aren’t that many real surprises in the driver market. You need to keep going back to the obvious, because that’s what happens 95 percent of the time.”

“That’s the other five percent,” he said.

With that in mind, let’s try and answer the obvious questions.

So is Newgarden destined for Team Penske?

Speculation has almost become assumption that Josef is heading to Team Penske. And it's not misplaced, but he has not yet signed because he can’t. Legally he can’t even be negotiated with until Sept. 28, and his current employer Ed Carpenter confirmed to Motorsport.com on Tuesday that he has heard nothing official from Newgarden nor his management team.

I’m no legal eagle, and I don’t know if the Ed Carpenter Racing/Josef Newgarden contract terms preclude Josef from at least signing a Post-It note of intent with a rival team, but the fact is that any potential deal between Newgarden and Penske is still not concrete.

Therefore, theoretically, there’s still hope for Alexander Rossi, who Motorsport.com revealed a few weeks ago has been in talks with Penske.

The other rumor – that Montoya's departure would see Penske reduce his car count to three – seems unlikely. The Captain's team has proven it can make a four-entry lineup work, and he told Motorsport.com last month that he was “very confident” he’ll run four IndyCars in 2017.

But we can’t dismiss the idea completely because the world’s best businessmen are the world’s ultimate pragmatists. If a strong crew needs to be assembled to run his hotly rumored IMSA sportscar project – DPi prototype(s) – and the potential sponsorship for a fourth IndyCar is not enough to cover a whole season, then building a sportscar crew from the current IndyCar crew lineup makes sense.

Interestingly, this rumor has gained momentum within the past week. We still expect Tony Kanaan will re-sign with Chip Ganassi, because he’s a firm favorite with NTT Data, and sponsors somewhat hold the whip hand, given Target’s departure from Ganassi’s IndyCar arm.

But now a source close to Montoya has suggested that the Ganassi lineup could include both Kanaan and Montoya. With Scott Dixon under contract already, and Charlie Kimball confirming to Motorsport.com that he will be staying at Ganassi for a seventh season, that would mean Max Chilton is going elsewhere…

If that were the case, the logical explanation would be for him to head to Trevor Carlin’s startup team. Carlin is, after all, part-owned by Max’s dad Grahame. But Trevor himself told us this was unlikely back in early August and last Wednesday morning stated that since then “nothing has changed whatsoever.” Hmmm…

The attraction to Ganassi for Montoya is obvious: it’s one of the greatest teams in Indy car racing history, regardless of a slightly ‘off’ 2016. The attraction to Montoya for Ganassi is that on his best days JPM is still brilliant. And, of course, lodged firmly in Juan’s mind will be the intel about why Penske were so dominant this season. It would be a good time to download him, Johnny Mnemonic-style.

What about these rumors of Ganassi switching back to Honda?

In some ways, this is even more intriguing than the driver market. One source who should know told me that Chip did a deal with HPD before the final race of the season. And both Art St. Cyr of HPD and Mark Kent of GM were slightly evasive when quizzed on the matter in the past seven days. 'We keep all our options open,' 'We always seek to improve our lineup,' 'Ganassi are great,' etc. That kinda thing.

Chip responded to Motorsport.com’s enquiry with a direct: “I'm perfectly happy with Chevrolet and expect to be under contract with them next year.” Which sounds pretty unequivocal, right?

But 2018 could be another matter, as team owners naturally like to keep their options open with one-year deals, and Chip’s team is so desirable that an engine manufacturer would likely agree to that.

Another point to bear in mind would be that switching to Honda one year before the universal aerokit is introduced might adversely affect the appeal of the team to a driver with a short shelf-life, such as Mr. Montoya.

What are Montoya’s other options?

JPM is a proud man and justifiably so, given his versatility and achievements. He is emphatically not going to want to come across as a Penske reject, but instead as a successful ace in control of his own destiny. His decision regarding his future may therefore be revealed before any Newgarden/Penske announcement.

If a Ganassi seat isn’t available (or is less appealing due to a change of manufacturer link-up), then top of Juan’s list would surely be Ed Carpenter Racing, the little team that could and quite often does. Interestingly, Ed had not heard from JPM up to and including the Watkins Glen weekend three weeks ago, but has since confirmed that JPM has now been in contact.

However, Ed assured us: “I am not doing anything until I have been officially notified [regarding Newgarden].” But that surely doesn’t rule out Montoya and Newgarden doing a straight team swap.

KVSH Racing is a reasonably enticing prospect for JPM, too. The Kevin Kalkhoven/Jimmy Vasser/James Sullivan-owned operation, which will be moving to Florida in the off-season, can afford to pay him reasonably well, Jimmy is an old buddy and former teammate of Juan’s and, like ECR, KV still runs Chevrolet so has the preferred aerokit.

Kalkhoven has also told Motorsport.com that it could run two cars next year, although whether this is in partnership with Florida-based Carlin, or as a separate entity has not yet been confirmed, as Kalkhoven implied he was doing due diligence on the subject.

Should he and Vasser elect to stay at one car, Montoya is one of very few drivers in the IndyCar paddock who could remain at his best while on a one-car team. Should they go to two, Carlos Munoz is “definitely” on KV’s list of prospects, according to KK. So an all-Colombian two-car lineup at KV? It’s a possibility.

However, if KVSH is becoming KVSH-Carlin, and Chilton is available with what is rumored to be between $6m and $8m from Gallagher, then it’s easy to foresee a Montoya-Chilton lineup, with Carlin’s Indy Lights champ Ed Jones in a third car for three races as his Mazda Road To Indy prize.

Is Andretti Autosport the best option for Alexander Rossi?

Well, you’d have to say ‘No,’ if you were basing your arguments off the last two seasons in IndyCar. Assuming Newgarden is going to Penske and that there’s no room at Ganassi, the ex-F1 driver’s most competitive option for 2017 would appear to be Ed Carpenter Racing.

But… if there’s one thing that ECR has not yet achieved, it’s establishing that its pace and progress over the past couple of seasons wasn’t just the result of having the superfast Newgarden paired with race engineer Jeremy Milless, who Josef describes as a genius. Also, Rossi is enjoying being able to gauge his progress alongside one of the established superquick drivers in the series, Ryan Hunter-Reay. And as was confirmed last weekend, RHR is staying put through 2020.

And for those who think he might be heading back across the Atlantic, Rossi told Motorsport.com two weeks ago: “It’s going to take something extraordinary, like a miracle, to get me back in Formula 1, because I wouldn’t go back to just any team. I’d be looking at mainly manufacturer teams, and the reality is that Mercedes and Ferrari are probably not going to call…

“And anyway, I like this series and I don’t feel I’ve achieved anything,” continued this year’s Indy 500 winner. “Yeah, obviously the Month of May was amazing, but I’ve got more to prove here.”

Oh, and there’s the small matter of Rossi telling us this week that he was still in “deep talks” with Andretti. So… probably staying.

Is Carlos Munoz staying or going?

The ball’s not really in his court. It’s no secret that the team is still trying to find funding. No secret, either, that Carlos would be the first to get the chop should the team not be able to run a fourth car. But he has suitors – KV, as mentioned, but also AJ Foyt Racing. As someone who takes his racing very seriously, is very good on most tracks and exceptional on ovals, Munoz would be an appealing prospect to a team that desperately needs a transfusion of new blood.

And Munoz confirmed to Motorsport.com last weekend that he would be very interested in what AJ and Larry have to offer. He’s already been checking out the list of tracks where Foyt cars were faster than Andretti cars – he had memorized them, in fact. His only question-marks are over who would be his teammate, and the fact that the team has one more year of running the HPD aerokit.

The Foyts, for their part, want to cause a big stir and are waiting to see if Kanaan or Montoya might be available. If not, then Munoz is high on their list. Two more young drivers that have had talks with the Foyts are Matt Brabham and Conor Daly.

Are the Bourdais-to-Coyne rumors true?

Could be. But those rumors started very early and Sebastien is surely too smart to have committed himself so soon to a team that is sticking with Honda power. Isn’t he? Or is Honda the party that’s making Seb’s move to DCR financially feasible?

What we do know is that Craig Hampson – the man who engineered Bourdais to his four Champ Car titles – is supposed to be leaving his role at Andretti Autosport. He was the stay-at-home-Dad in Michael’s race engineer lineup over recent years, running the fifth AA car at the Indy 500.

If Bourdais is to arrive, then RC Enerson is currently perceived as the more likely incumbent to remain, rather than Daly. But signing either is not yet the priority at DCR.

Yes, as Sam revealed on Thursday, but probably not full-time in 2017. You’ve got to imagine that’s a darn sight closer than Bobby Rahal’s hopes of finding $7m to run a second car but given that Graham Rahal has finished as top Honda driver for the second straight year, Rahal Letterman Lanigan Racing are coping well running solo.

And the rest, truly, can wait until the futures of Newgarden, Montoya, Kanaan and Rossi are sorted and confirmed.