INDIANAPOLIS, Thursday, May 5, 2011 - Donald J. Trump today informed the Indianapolis Motor Speedway that he may be announcing shortly his intention to run for the office of President of the United States, and therefore he thought it would be inappropriate to drive the Pace Car for the 100th anniversary running of the Indianapolis 500 on Sunday, May 29.

"I very much appreciate the honor, but time and business constraints make my appearance there, especially with the necessary practice sessions, impossible to fulfill," Trump said. "I look forward to watching the race from New York."

Jeff Belskus, Indianapolis Motor Speedway president and chief executive officer, noted that he respects Trump's position and appreciated the communication regarding this decision.

"Donald Trump has been very enthusiastic about the '500' from the beginning of our conversations, and I have appreciated the interaction we have had with him and his staff," Belskus said. "From my first conversation, I was impressed by his deep understanding of the event and history, and I thank him for being a true fan." 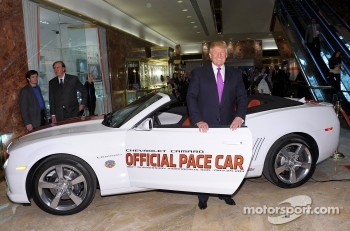 The driver of the Chevrolet Camaro Convertible Pace Car for the May 29 race will be announced later this month.

Race Day ticket prices start at just $30. Fans can buy tickets online at www.imstix.com, by calling the IMS ticket office at (317) 492-6700, or (800) 822-INDY outside the Indianapolis area, or by visiting the ticket office at the IMS Administration Building at the corner of Georgetown Road and 16th Street between 8 a.m.-5 p.m. (ET) Monday-Friday.