The charismatic driver made 7 Indianapolis 500 starts. His finish was a ninth place in the 1976 race. 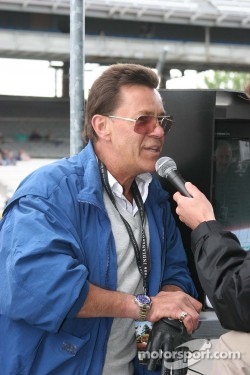 Walther, from Dayton, Ohio, made seven Indianapolis 500 starts from 1972-79, with a best finish of ninth in the rain-shortened race in 1976. But sadly he is probably best remembered for suffering major injuries in a spectacular accident at the start of the 1973 Indianapolis 500.

Walther, whose nickname "Salt" was courtesy of some pun-loving boyhood classmates who were amused by his surname, was aware of racing from his earliest memories. His father, George Walther, was a Dayton industrialist who fielded "500" cars in the 1950s and 60s for Troy Ruttman, Carl Williams, Mike Magill and others, while giving rookie tests to such notables as Johnny Rutherford, Elmer George, and most famously in 1958, five-time World Champion Juan Manual Fangio.

After a career in powerboat racing, young Salt Walther began entering USAC sprint car events in 1968. At the end of 1970, he made his USAC National Championship debut in the Sacramento 100, noteworthy for being the last "full-blown" Championship event taking place on a dirt track. Although he qualified 15th in the 18-car field, he heeded officials' suggestion that he start last. Walther stayed in that position, eliminated by mechanical trouble after 26 laps.

In spite of finishing 11th in the second half of a twin-100 event at Rafaela, Argentina, in early 1971, officials felt Walther needed more experience before tackling the "500." He returned in 1972 to Indianapolis, qualifying for one of the 33 starting positions at the very last minute. But his "race" lasted only a matter of yards, as he was obliged to pull off into the Turn 1 grass on the first lap due to magneto failure.

Walther persevered and enjoyed arguably his most successful season in 1972, finishing eighth in the Pocono 500 and sixth in the Ontario 500 to rank 14th in USAC points.

He was hospitalized for several months after his terrible 1973 Indianapolis accident, and he earned considerable respect from the fans and the racing community by returning to the track in 1974 and earning another starting position in the "500."

In 1975, the Walther team fielded a second car at Indianapolis for Bob Harkey. When Walther encountered mechanical trouble right after the start, Harkey was obliged to come in and hand over his car. Although the combination ended up 10th in the rain-shortened affair, it might well have placed as high as sixth if the decision was made to wait for the first caution period or refueling stop before making the time-consuming driver switch.

Walther had a number of impressive runs during his career, including a 12th-place finish in the 1976 Daytona 500 and a career-best fourth in the 1977 Trenton 200. He was also one of the USAC drivers who traveled to England in 1978, placing seventh at Silverstone and sixth at Brands Hatch on consecutive weekends in early October.

But Walther's personal life was not without complications. He subsequently disappeared from the racing scene for several years, reappearing, rather surprisingly, at Indianapolis in 1990 when he amazed everyone by earning a temporary starting position only to be "bumped" right as the final gun was sounding.

Walther's final appearance as a driver came with an unsuccessful qualifying attempt in 1991, although he would continue to pay the occasional visit, bounding with great strides from garage to garage and hospitality suite to hospitality suite, his outward appearance considerably changed but his unmistakable voice and his infectious charm and enthusiasm just as they always were.

No details on arrangements have yet been made available.

Carlin: McLaren “too late” to enter IndyCar in 2019

Rutherford hopes Alonso is in "awe" of Indy