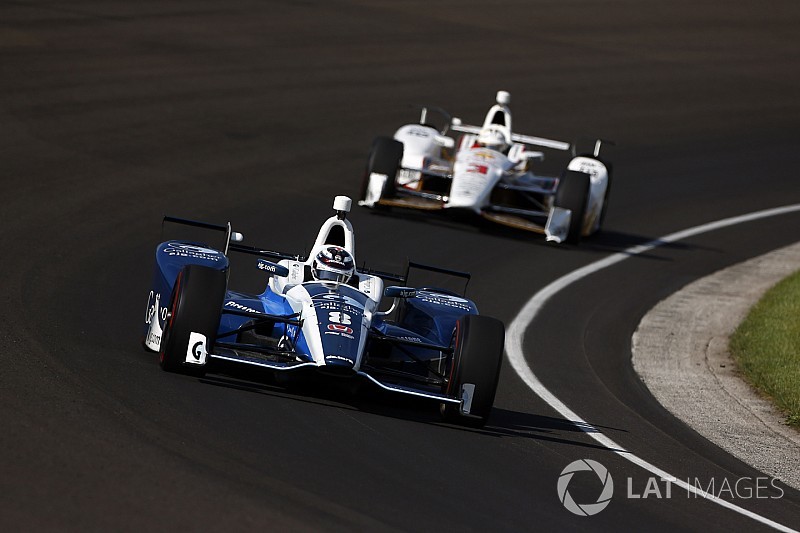 Max Chilton put Chip Ganassi Racing-Honda on top of the speed charts at IMS today after the three-and-a-half-hour practice session that saw all drivers practicing running in dense packs and long crocodiles of traffic.

Chilton clocked a 228.592mph to go some 0.4mph clear of the second fastest car, that of Ed Jones of Dale Coyne Racing-Honda.

Polesitter Scott Dixon, who will start the 101st race from pole position, was third fastest on a 227.165 followed by the fastest Chevrolet driver, reigning IndyCar Series champion Simon Pagenaud on 226.998.

Fastest “one-off” driver was Sage Karam in the Dreyer & Reinbold Racing-Chevy who was eighth, while defending Indy 500 champion Alexander Rossi was ninth.

Marco Andretti and Penske’s Will Power made late improvements to narrowly edge ahead of superstar rookie Fernando Alonso in the McLaren Honda Andretti entry.

Six drivers completed over 100 laps – Chilton, Castroneves, Power, Alonso, Charlie Kimball (Ganassi) and Jack Harvey (Andretti Autosport). The latter’s #50 car, run by Michael Shank Racing, not only completed the most laps (124) it also topped the speeds recorded without the aid of a tow – a 224.036mph lap.

James Davison was 28th fastest in the hastily prepared backup #18 car from Dale Coyne Racing, as he replaces the injured Sebastien Bourdais.

That was the final lapping the cars will be allowed to do before the hour-long session on Friday (Carb Day). After that, the next times the car hit the Speedway will be for the Indianapolis 500.