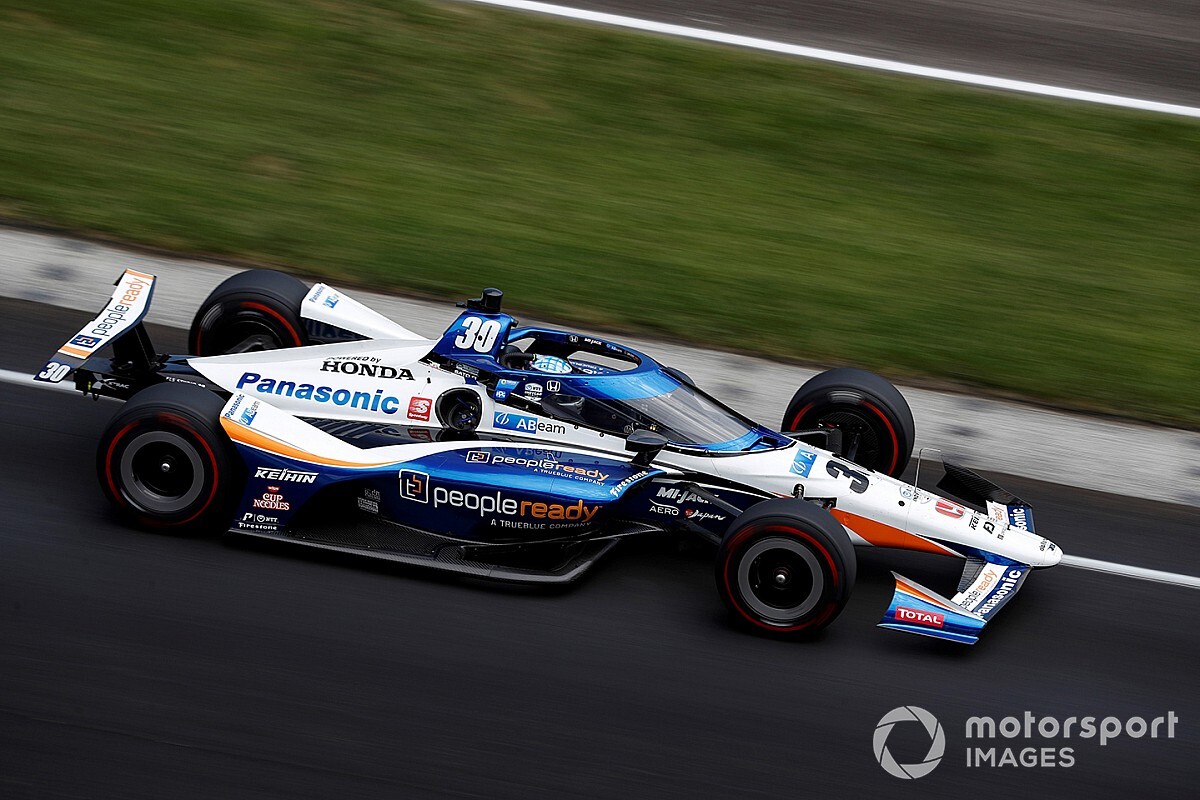 Following a second day of practice, in which he ended up second fastest and turned 122 laps, Sato said the aero compromises caused by the aeroscreen and the surprising lack of tire degradation are the prime reasons for this difficulty.

“I think there’s two things happening,” said the 2017 Indy 500 winner. “The aeroscreen is a great safe device, but a big chunk of the weight in the higher part of the car has affected us so we’ve lost quite a bit of grip and also aero efficiency. And the second thing is, IMS did a great job in terms of the treatment for the track surface, and it’s good grip and it’s consistent grip, but it’s made the tire last longer.

“So say 30 laps is a stint, it used to be there was more tire degradation, but today, I was surprised that with the conditions there was very small degradation. That makes it even more difficult to overtake. Once you get to follow, getting really close, you have a massive washout [understeer] and we are starting to slide a lot more, making it very difficult.

"I think up at the very front you'll be able to swap the leader change. But third car onwards, I think it's extremely difficult to overtake.”

Asked by Motorsport.com if his classic and ultimately successful battle with Helio Castroneves in 2017, when cars had manufacturer aerokits, might have been different in these cars, Sato said: “I don't know. It's a difficult question. Certainly I was happiest with '17 car for sure. That car was fast and we were able to get much closer to the guys [ahead] compared to this year.

“Like I said, I think the guy leading the pack who always has air in front [means] the guy in second has always the opportunity to overtake relatively easier compared to in the pack. I think for the third car it’s extremely difficult.

“If you're in sixth place going to the last 10 laps, it’s extremely important to get earlier into the pack in the front because otherwise you will get no chance. That is probably the biggest difference from previous years to this year. I think track position for the last stint you need to be top six. I think it's very, very important.”

Last year Sato turned in one of the drives of the race after falling a lap down, and came back to finish third. He told Motorsport.com that such a performance would still be possible in the 2020, despite the difficulty in passing.

“Yes, I think it's still possible because it's strategy related, too,” he commented. “I had the pit stop problem last year, early part of the race, lost a lap. It took me 100 laps for me to get back on the lead lap and when I get on the lead lap, I was still 20th! Still need to move on.

“Of course, even last year when you are hovering around 20th place, even if you’re a fast guy, it's so difficult because of the turbulence you're getting. It's extremely difficult from the top three to 20th. The car requirement is very different.

“Last year I didn't completely make the top five until really last 10 laps. Then my car, every pit stop we of course adjusted on the wing level and tire pressure, based on experience in the stint before, looking for the next how we can deal proactively.

"We had a very, very much understeering car because you need a lot of stability back in 20th place. If I had been competing much [nearer] the in front last year, perhaps I would have a little bit more edge for the last five laps.

“I believe even today's car, anything can be possible, even if you are off sequence. The bottom line is, you need to be [top six] in last 10 laps, otherwise difficult to win.”

To Sato’s point regarding the IMS track surface and its ‘kindness’ to the Firestones, president Doug Boles explained to Motorsport.com that the Speedway received RPE – Rapid Penetrating Emulsion – treatment in the fall of last year, as it had the year before.

RPE “fills in the very small cracks/gaps. We also hand sealed some of the larger splits – there were very few of those in 2019 – and by larger, I mean 1/16th of an inch.”