The unveiling ceremony was held at the Indianapolis Motor Speedway Hall of Fame Museum.

INDIANAPOLIS, Monday, Dec. 2, 2013 - Throughout his racing career, Tony Kanaan has hungered to see his face on the Borg-Warner Trophy as one of the spoils of victory for winning the Indianapolis 500.

That long-sought achievement was finally realized Dec. 2 during an unveiling ceremony at the Indianapolis Motor Speedway Hall of Fame Museum. Kanaan earned his first Indianapolis 500 victory on May 26.

"I love it," Kanaan said in seeing his likeness for the first time on the Borg-Warner Trophy. "It actually looks better than myself right now. They did a good job, and it's staying there forever, so it's a good thing."

Kanaan's bas-relief image became the 100th face placed on the iconic trophy, which is the most coveted and famous award in worldwide motorsports. The Borg-Warner Trophy features the face of the winner of all 97 Indianapolis 500-Mile Races, including two years in which co-drivers assisted the primary driver to Victory Lane, and former IMS owner Anton "Tony" Hulman. 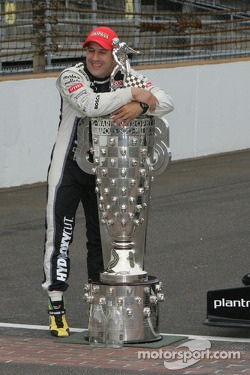 Kanaan's victory in "The Greatest Spectacle in Racing" came in his 12th career "500" start, tying an event record for earning a victory latest in a driver's Indy 500 career.

"I've always said in every single interview that the track, this track, picks the winner," Kanaan said. "I was always nice to the track, and I could never understand why she wouldn't pick me. I always obeyed the rules and tried to be nice."

One of the most popular drivers ever at IMS, the hard-charging Kanaan posted an Indy 500 winning speed of 187.431 mph that bettered the previous record of 185.981 set by Arie Luyendyk in 1990.

Kanaan's image now appears along with the faces of many of the greatest drivers in motorsports history, including two competitors Kanaan knows especially well.

"Growing up seeing all the big names winning, and then lately having my two best friends Dan (Wheldon) and Dario (Franchitti) winning and putting my face right beside them is an honor," Kanaan said. "To have the three of us in a row is like somebody had a script a long time ago, and they said that this is what's going to happen. With such a tragic end of Dan's career and with Dario retiring, it's an honor to be right beside them."

Kanaan ended the 2013 racing season not knowing which team he would drive for during the 2014 IndyCar Series season. In early October, he signed with Target Chip Ganassi Racing, which has won five of the last six IndyCar titles.

"I'm excited, obviously," Kanaan said. "It is one of the best teams in the series, and I'm really looking forward to it. It's one of those things that you can never expect it when people think you're done and you go back and turn the situation around, so I'm really glad that Chip is giving me the opportunity, and I'll definitely make the best out of it."

Newly retired three-time Indianapolis 500 winner Franchitti recently expressed his desire to stay with Ganassi Racing in some capacity, and Kanaan hopes his good friend and former rival on the track will soon be his driving coach.

"Roger (Penske) has Rick Mears, and it would be something like that for us," Kanaan said. "For me especially, because it's a new team and I'm still getting used to the people, and to have Dario there when he just drove the same car, and it's not like he retired 10 years ago. I'm really looking forward to that."