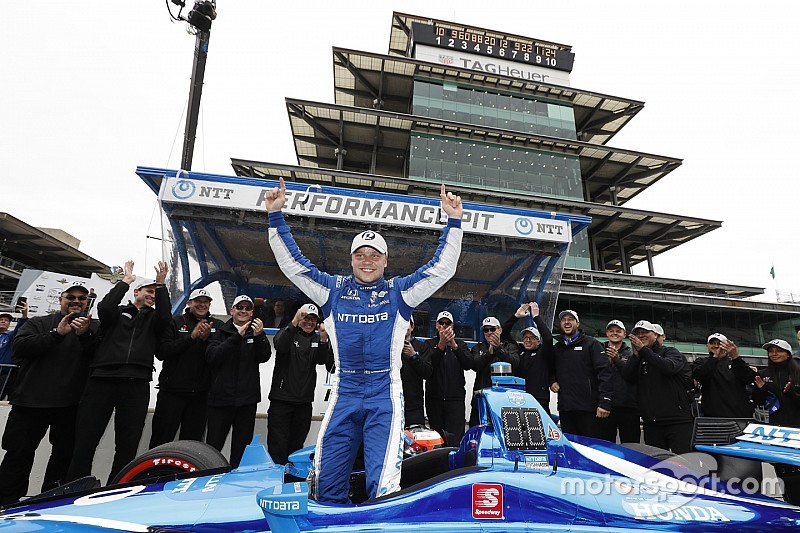 The surprise of the 53degF session was Meyer Shank Racing with SPM-Honda, whose Jack Harvey has looked strong, but was shockingly less than 0.05sec from taking the team’s first pole. It was the first appearance in the Firestone Fast Six for the two-time Indy Lights runner-up.

Colton Herta set the fastest lap of the weekend but unfortunately for him and Harding Steinbrenner Racing, it came in Q2, and he wound up less than a tenth from pole.

Another surprise was Ed Jones, who grabbed fifth for Ed Carpenter Racing to be fastest of the Chevrolet runners.

In Q3, three-time Indy GP polesitter Will Power of Team Penske-Chevrolet tried both sets of reds he had run in Q1 and Q2, but the tactic didn’t work – his fastest lap was his first flyer – and so he ended up half a second off Rosenqvist’s top time. However, he maintained his 100 percent record of outqualifying his teammates this season.

Neither Sebastien Bourdais (Dale Coyne Racing with Vasser-Sullivan Honda) nor Spencer Pigot (ECR) set a representative time on alternate tires in Q2, the latter getting caught behind another car. He will start only 12th despite being fast throughout practice.

IndyCar returnee Helio Castroneves’ tactic of going straight out on alternate compound tires didn’t pay off in Q1 Group 1, as he wound up 15th, albeit only two places behind Penske-Chevrolet teammate Josef Newgarden.

The championship leader was left struggling to figure out why he hadn’t progressed to Q2, whereas Meyer Shank Racing’s Jack Harvey and Ed Carpenter Racing’s Ed Jones had done so.

Andretti Autosport’s Ryan Hunter-Reay (who is feeling unwell) and Alexander Rossi were two more drivers gutted to finish outside the Top Six in their Q1 groups, consigning them to 16th and 17th, beaten by Santino Ferrucci’s Dale Coyne Racing-Honda.

James Hinchcliffe was half a second slower than Arrow SPM teammate Ericsson and will start only 18th.

Rebellion-Williams was left with 0.5 litre of fuel at finish