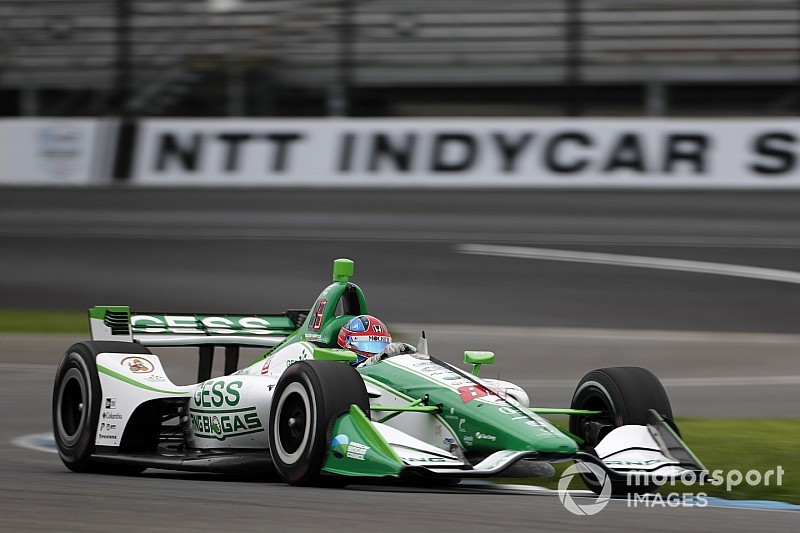 Colton Herta emphasized the strength of his challenge in today’s IndyCar Grand Prix when he took top spot in the race day warm-up by almost four-tenths of a second.

Herta, who was the fastest on primary tires yesterday in qualifying, will line up fourth on the grid on the Indianapolis Motor Speedway’s 2.439-mile road course, and this morning the Harding Steinbrenner Racing-Honda driver set a 69.200sec lap to top the field by 0.3802sec.

Second-place starter Scott Dixon of Chip Ganassi Racing was 0.38sec shy of that time, just ahead of the Rahal Letterman Lanigan Racing-Hondas of Takuma Sato and Graham Rahal who will start 11th and seventh respectively.

Sebastien Bourdais was fifth in the Dale Coyne Racing with Vasser-Sullivan-Honda entry, a quarter second ahead of the fastest of the Andretti Autosport-Hondas, that of Marco Andretti.

Max Chilton was the fastest Chevrolet drivers in the Carlin entry, but disappointed teammate Patricio O’Ward failed to turn a lap after more alternator trouble, as per yesterday.

Josef Newgarden was fastest of the Team Penske-Chevys in eighth, ahead of polesitter Felix Rosenqvist in the second Ganassi entry. A trio of Andretti cars then headed defending race-winner Will Power of Team Penske.

Several drivers took to the grass or escape roads, but none suffered damage.

The sixth IndyCar Grand Prix on the IMS road course begins at 3.45pm ET, with TV coverage – this week on NBC, not NBCSN – commencing at 3.00pm. Current weather forecasts suggests rain will hit the area around 3.30pm, and if this is true, it will be only the second wet race with the 2018-spec aerokit, and the first with Firestone’s current compound of wet tire (introduced at Detroit last June).

Bunny Burkett to be honored at home track