IndyCar president Jay Frye says that he hopes the prototype 2020 Aeroscreen will be seen in one month, with ‘production’ versions a month after that.

The Aeroscreen, developed by Red Bull Advanced Technologies, was today confirmed to be introduced for the start of the 2020 NTT IndyCar Series season.

Frye stated: “The plan is to have a prototype in probably 30 days, and we'll have real pieces in another 60 days. Get them on cars this summer to test, and then at some point… around November, we'll have one for each entry. To put this on all the cars in 2020 is our goal.”

As the former manager of the Red Bull Toyota NASCAR squad, Frye said his connections helped in facilitating the partnership for Aeroscreen development.

“They're great friends, we talk to them all the time,” he said. “When they came out with their application [proposed alternative to F1 Halo] a couple of years ago, it was like, ‘That's very cool. That's kind of what we wanted to do. We had the same intent.’

“The last couple years we've tested our own version, and earlier this year we called them and said, we want your idea on our car; how can we do that, how can we work together?

“They immediately jumped on it – basically that day! What's the next step, how is this going to work? In the last 60 days, it's incredible the amount of work that they've done. We'll have a prototype here pretty soon, so this thing is rolling right along. We're very confident in everything they're doing.

“They've got great pride and equity in what we're doing here, so we're excited to see the final product.”

Andy Damerum, Red Bull Racing business development engineer, and Ed Collings, head of composites and structures at Red Bull, were able to go into more detail of the design for IndyCar’s Aeroscreen.

Said Damerum: “We got experience, back at the beginning of 2016, working with the FIA on an aeroscreen program, something similar called a canopy. The FIA asked for a number of companies to look at protection devices; Halo is one of them, and the windshield was another one.

“We had experience of working with Perspex technologies and safety devices, so we got quite a lot of experience in this area. The FIA didn't use the system in the end, but chose to use the Halo system, and I think it was later on that year we got contacted by IndyCar to see if there was an interest and see if we could share our IP with them.

Collings added that the Aeroscreen’s design will withstand the same loads as the FIA Halo, explaining: “I think part of the reason that the FIA didn't choose the Aeroscreen initially wasn't so much the strength but the time it would take to design around the other concerns of visibility and reflections, and they felt they didn't have time. They were under pressure to introduce something quickly, and the Halo removed some of those concerns from the design process.

“But in talking to IndyCar at the beginning of this project, that does also remove some of the protection from smaller debris, which is something that IndyCar felt was essential for their series. So we think this is the right solution, more comprehensive solution, more fitting for IndyCar, and we're working hard with a good group of engineers to design out all those other issues that perhaps prevented the FIA from being able to react quickly enough.”

Frye confirmed that the ‘hoop’ of the Aeroscreen frame will not impair drivers’ vision even on high-banked ovals, while Collings explained that the increased height of the screen was also to help prevent a driver’s crash helmet making contact with the any part of the design.

“Part of our work has been to study previous crashes in the IndyCar Series,” he said, “and to detect where the helmet position was during those crashes. One of the important parts of our design is that we don't put a very rigid structure in a position where the helmet could make contact in a high-G instant. So in order to deliver that, we've created an exclusion zone where this device doesn't enter that zone where it would impede the driver's head.

“It's important that we haven't introduced any compromises by adding this assembly on to the car. So as a result, that has defined the height of the device. It's quite similar to the previous windscreen design, but particularly it's higher at the rear edge in order to protect the driver more comprehensively than the earlier prototype would have done.”

Regarding driver extrication in the event of a shunt, Collings stated: This is one of possibly 20, 25 topics that we've had to explore and come up with solutions working with the AMR IndyCar Safety Team to ensure they have a very fast and prepared and practiced method of removing the parts of the screen.

“We use the jaws of life through the IndyCar sponsor, and they deliver the equipment that is perfect for the job.”

Frye suggested that the screen may stay the same for the next-gen IndyCar (due in 2022) but obviously more integral to the car’s design, rather than an “add-on” to the IR18/universal aerokit bodywork

“A hybrid of this will be on the next generation of car,” he said, “or it might be this one – it just depends. When you look at the Red Bull [F1 car’s canopy] obviously there was an angle to it where it went into the monocoque [which] with this current car we were not able to do because it couldn't take the load there, so they’ve tied it into the roll hoop, which we thought was brilliant. So the roll hoop actually created this additional strength that was not really the original intent.

“So again, they've done a phenomenal job… This thing is very strong.” 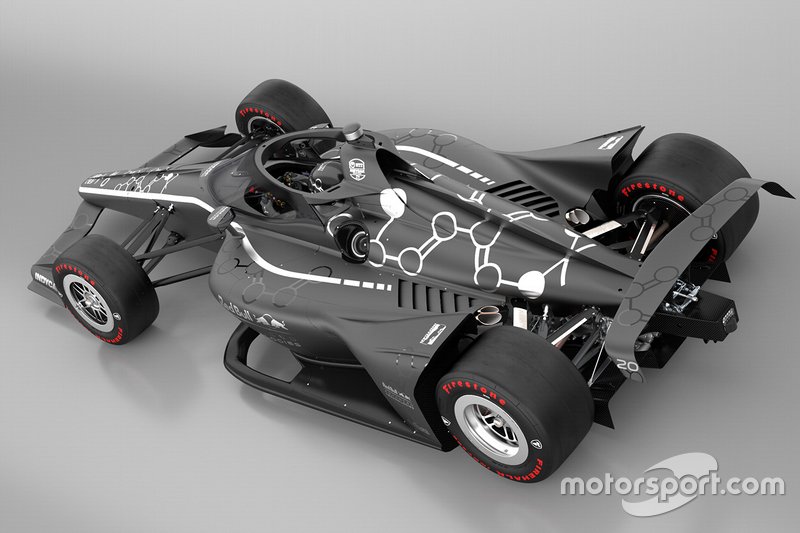 VeeKay on wreck: “Indianapolis bites you and it really bit me”