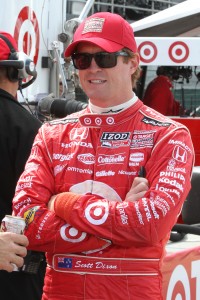 Managing Director Mike Hull on New Hampshire: “Racing on ovals defines the Indy car racing brand globally. With New Hampshire Motor Speedway being a one-mile oval, it truly shows how much speed can be generated in a confined area by an Indy car. Both Dario and Scott had the opportunity to peek at the Speedway, and are looking forward to going back to a track that is similar to the Milwaukee Mile’s style and banking. Although it appears that the track is four corners connected by two straights, the steering trace shows that our Target guys never stop turning. Imagine the constant G-forces generated on the tires and the chassis that transfers directly to the drivers. Watch out for us Sunday. It’s going to be fun.”

TCGR Comes Back to NHMS: TCGR has made six starts in Indy car races at New Hampshire Motor Speedway, but their most recent one came in 1995. Those six starts have been made with six different drivers (Eddie Cheever, Arie Luyendyk, Michael Andretti, Mauricio Gugelmin, Bryan Herta and Jimmy Vasser). In those races, TCGR has scored one top-five, two top-10s and completed more than 82% of the scheduled laps (985 of 1,200). Andretti had the best finish in the six starts, coming home fifth in 1994.

Top-Two: Since Franchitti joined TCGR in 2009, he and Dixon have finished first and second six times (Dixon-four wins, Franchitti-two), including last weekend’s race at Mid-Ohio. In the races following their five previous one-two finishes, TCGR has two wins (Both by Franchitti), six podiums, seven top-fives and eight top-10s.

Scott Dixon and the No. 9 Target Team

Did You Know?: With his win in the Honda Indy 200, Dixon tied Emerson Fittipaldi for first on the all-time Indy car wins list at Mid-Ohio with three victories. He is also the only driver to have finished inside the top-five in every race at Mid-Ohio since the IZOD IndyCar Series returned there in 2007.

Mid-Ohio Recap: Dixon took the green flag from the pole for the first time this season and was able to extend his lead over the rest of the field during the early portion of the race. Following a caution on lap 22, Dixon hit pit road with most of the leaders and would restart third behind cars that stayed out. He quickly moved back into second and began chasing down the leader. Dixon came in for his second stop on lap 55, but after rejoining the race, the caution was displayed and he was placed second behind teammate Franchitti. On the restart, Dixon drove the No. 9 Target Honda to the lead with less than 30 to go. After pulling away from second, Dixon led the remainder of the race and scored his first victory of the season.

Dario Franchitti and the No. 10 Nikon Team

No First-Timer: While Franchitti will be making his first start at New Hampshire in an Indy car, he has raced at the track twice in NASCAR competition. He made one start at Loudon in both the NASCAR Sprint Cup Series and NASCAR Nationwide Series during the 2008 season. In those races he completed 480 of 484 laps (99%), started in the top-10 for both events and had a best finish of 13th in the Nationwide race.

Milwaukee Magic: The last time the IZOD IndyCar Series went to a one-mile oval it was the Milwaukee Mile in June. Franchitti made a statement early in the weekend by capturing the pole and leading two of the weekend’s three practice sessions. When the race began, he jumped out and led the opening 115 laps. During a round of pit stops, he fell out of the lead but ran inside the top-three throughout the middle portion of the race. With 26 laps remaining, Franchitti moved back into the lead for good and after being out front for 161 of 225 laps, guided the No. 10 Honda to victory lane for the third time in 2011.

Mid-Ohio Recap: Franchitti started the afternoon in third and spent the entire first stint of the race inside the top-three. After the first yellow flag, Franchitti drove to the attention of his crew and received new tires and a full tank of fuel. After restarting fourth, he wasted little time moving the No. 10 Honda back into the top-three by using the outside lane to make the pass for third. Franchitti picked up the lead during the next round of green flag stops and while on pit road, the caution flew and after beating Dixon to the blend line, Franchitti was awarded the lead. After the green flag came back out, Franchitti fell to second behind Dixon, but was still one of the fastest cars on the track. Franchitti pulled away from his closest competitors and took the checkered flag in second.

Team Penske excited at the return to Loudon event