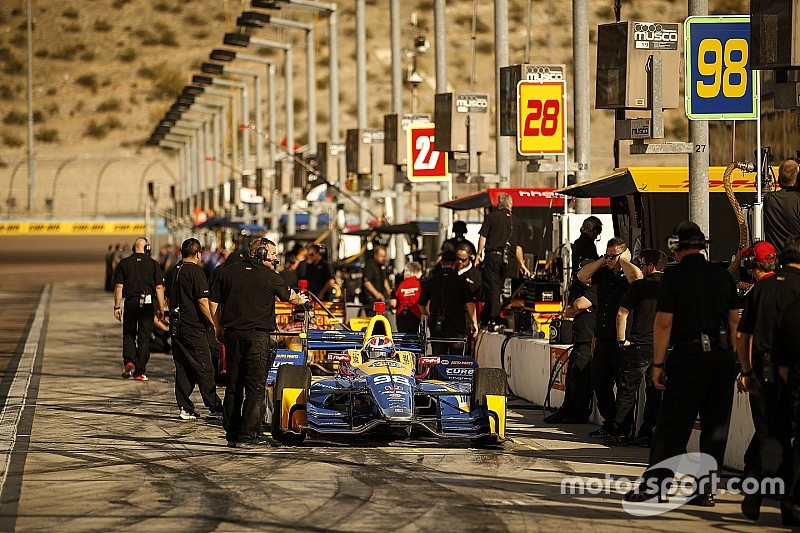 The second Phoenix race for the current breed of IndyCars needs to feature better racing, say the drivers, but none are sure that can be achieved during an aero-freeze year.

Andretti Autosport’s Ryan Hunter-Reay told the assembled media at Phoenix International Raceway: “Our first objective as a series, but mostly as drivers, is to make a better show for the fans. When it's more entertaining for you, it's fun for us, and we wanted to do something.

“Last year when it takes 30 laps to pass a car, it becomes frustrating and we know that's not what the fans come here and want to see. [2017] is an aero freeze year, so we're…going to go out there, we're going to run together tonight, tomorrow, and we'll have a better idea.

“But I can't really say there's a silver bullet at the moment that's been implemented.”

Teammate Marco Andretti said: “You know, we're going to work on it. We've been pushing it, that's for sure. The only thing that I think can help is closing the holes up on the bottom of the [cars’] floors. But that's just me.

“I think it'll be better,” he said. “It's always a fine line and something that's very tough to achieve and takes multiple attempts. I expect larger changes for next year when we go to a single aero kit configuration, and because next year IndyCar will have the power over the whole car. Right now it's very tough because the parameters that they use, it's very difficult to make an equal change for both [manufacturers].

“Firestone brought a different tire here, too. For me it actually felt like the track grip was up over last year, so that's kind of interesting. Not sure yet why we're getting that read.

“We're doing what we can as the drivers to make the show better, and we'll have to wait and see whether it turns out that way.”

Asked if he shared his concerns over improving the show, Dixon said: “Yeah, it's paramount, and there have been some heavy discussions, and not just for here but for a lot of different places. But there's a lot of pieces to the puzzle. It's never that easy just to make one change. In that moment you're going to annoy or anger somebody.

“I think IndyCar in the off-season has done an amazing job of going to these tracks, testing configurations… Right now in a stagnant year, it's kind of tough, but still they've made some pretty good tests and adjustments and are working in the right direction. We'll just have to see how it works out.”