Wheldon's wife, Susie, released the following statement on behalf of the family, inviting members of community to attend the service:

"Although the last few days have been unbearable for our family, the overwhelming love and support we have received are rays of sunshine during these dark days. The outpouring of sympathy and condolences has been so comforting, and I want to thank everyone for their kind notes, letters, gifts and flowers.

"Dan touched the lives of many people, and I would like to invite those citizens in our community who knew and loved my husband to attend his funeral service at the First Presbyterian Church of St. Petersburg on Saturday, October 22, at 10 a.m.

"Though we won't be able to fit everyone inside, I know that Dan would have wanted the community to share in the celebration of his life and to grieve his passing. Thank you again. I am forever grateful for your kindness." 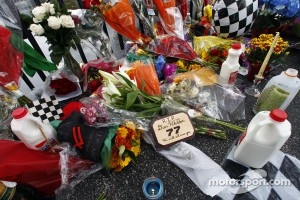 All of Fifth Third Bank's Indianapolis branches also are accepting contributions in person, which will be routed to the account.

In lieu of flowers, friends and fans also can choose to make a donation to the Dan Wheldon Family Trust Fund or the Alzheimer's Association, a cause close to his heart.

For more details, visit Alzheimer's Association or Dan Wheldon Memorial, a memorial site, which includes a Facebook link to leave condolences and remembrances and a career photo retrospective.

Those wishing to send their sympathy and condolences to the Wheldon family, can address letters to:

INDYCAR will hold a public memorial service to celebrate the life of Wheldon at 4 p.m. (ET) Sunday, Oct. 23, at Conseco Fieldhouse in Indianapolis. Doors open to the public at 2:30 p.m. The Virginia Street parking garage will be open free of charge to augment on-street parking.