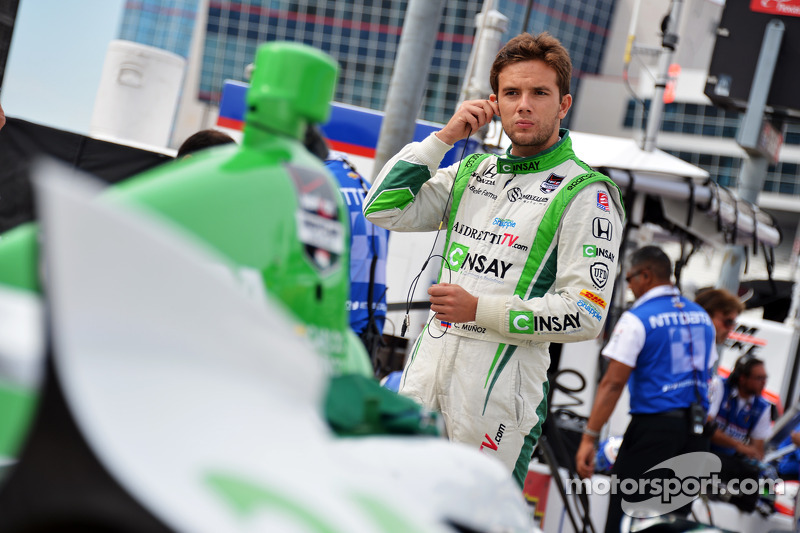 Carlos Munoz burst on the scene with a runner-up finish in his first Indianapolis 500 Mile Race in 2013. The 22-year-old Verizon IndyCar Series rookie from Colombia has continued on the fast track in the first half of the season.

Munoz is sixth in the championship and leads the Sunoco Rookie of the Year standings through eight races. Munoz's four top-10 finishes have been punctuated by third place at Long Beach, where he advanced eight positions relative to his qualifying. Sixth for Dual 2 at Belle Isle on June 1 is his best qualifying effort.

Catching up with Munoz, 22, a Miami resident, heading into the Shell and Pennzoil Grand Prix of Houston Presented by the Greater Houston Honda Dealers:

Q: How would you assess your overall performance in the first half of the season?

CARLOS MUNOZ: It's been an OK year apart from the mistakes I've made at Barber (bouncing off tire barrier) and Texas (spin on pit lane). I'm improving a lot on road and street courses and proving a lot. In Detroit we were really fast but the strategy just wasn't the correct one (finished seventh and eighth). Next is Houston, which will be really tough with the doubleheader. My goal was to start improving a lot right from the start and that's why we put all the testing in this part of the year because we knew in the beginning it would be tough for me.

My goal is to stay there in the championship and win the rookie award, and my main goal is to learn as much as I can this year and a make it a big year next year.

Q: What, if anything, has been a surprise in your first full season?

Q: What have been a few keys you've learned about IndyCar racing so far this season?

CARLOS MUNOZ: Indy Lights is a great school for drivers because it gives you the basis for the racing and the ovals. It's hard to race on ovals because you have to be aware of the others around you all the time, the strategy, tire management -- all this counts. Each race I have learned a lot. I feel like I did during my first Indy Lights year. I learned step by step and toward the end of the season I won and the second year I challenged for the championship. Next year is the big year.

Q: There are distinct personalities at Andretti Autosport with Marco Andretti, Ryan Hunter-Reay and James Hinchcliffe. How do you feel you've fit in?

CARLOS MUNOZ: We work as a team, which is the mentality (team owner) Michael (Andretti) wants. We have a great relationship and work well together. A lot of drivers will say that, but in this case it's true. The first day I stepped into the team, whether it was in Indy Lights or this year in IndyCar, I felt welcome.

What Graham Rahal is learning by dating Courtney Force