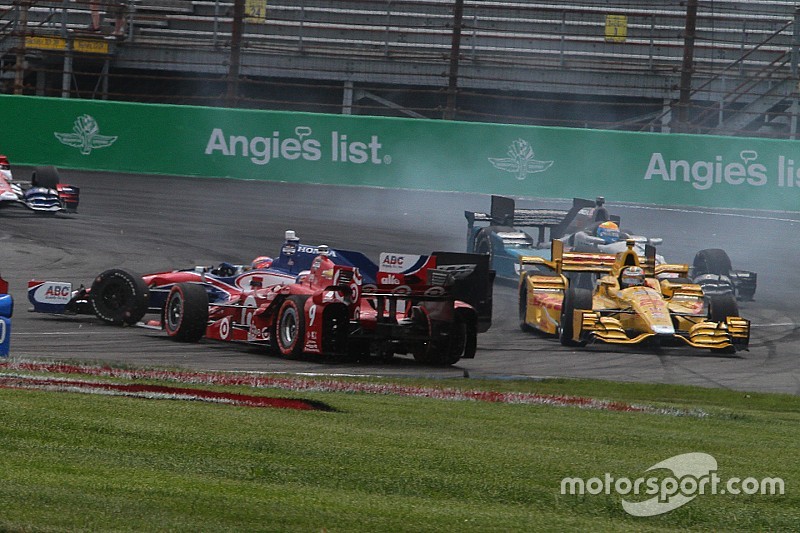 Jay Frye, the Verizon IndyCar Series’ new president of competition and operations, has set a deadline of three weeks to have Race Control’s stewards and procedures in place.

Frye told Motorsport.com: “We hope to have it all sorted out by the Phoenix open test, so within a couple of weeks. We’re working on the candidates and also defining the Race Control process. Nothing’s locked in yet.”

This week, Frye has been in individual meetings with IndyCar drivers and says he has been listening to their comments about Race Control, as well as covering other aspects of the series going forward.

He said: “When we have these meetings, we talk about our plans for the year and go over things from the previous year. And yes, we certainly listen to their input on lots of different topics. Part of the task for me this week has been to discuss what’s happening with our stewards program.

“In reality it seemed very well received so I think we’re on the track. Now we just need to go execute it.”

Frye alluded to a conversation with Motorsport.com last November, a couple of days after he took the job of IndyCar president of competition and operations. He commented: “As I said then, we’re aiming for consistency by structuring Race Control differently and refining the decision-making process.

“Part of that is organizing a group of people who would be the same every week and would participate in practice, qualifying, warm-up and the race. So we’ve worked diligently on trying to make that happen.

“We’ve talked to many different people regarding stewardship. We’re trying to get a good group that would include a couple of ex-drivers – at least two of the three would be former drivers. And we’ve been very encouraged by the enthusiasm we’ve gotten from them.

“So overall I’d say we’re really enthused about how it’s shaping up and although it’s fluid at the moment, like I say, we should have it finalized in the next couple of weeks because we’re much closer. Having the steward lineup and the procedures finalized by the Phoenix test [Feb. 26-27] is our intention.”

Although Frye would not go into precise detail about how rules will now be interpreted and applied, nor who he’s interviewed for the steward roles, he asserted: “Brian Barnhart will manage Race Control because he’s good at it, but what happened in the past was that he was asked to do too much. So the stewards will be independent of him.

“At this stage, we’re going to be very involved in organizing the system – getting the people in place and the right procedures set in stone – but the stewards will then be very independent. They will have the latitude to do what they need to do and in the way they need to do it.”

Candidates for the roles of full-time stewards are seemingly obvious. Yet it is not a position to be taken by those who wish to be friends with current IndyCar drivers. The best candidates are those who will enforce the rules regardless and won’t waver. Yet being a hardass isn’t necessarily the ideal requirement either. The very best candidates will be those who are respected from the start. The next best are those who will earn respect by being consistent, and not showing favoritism.

We know that Max Papis has been approached, but since neither he nor Jay Frye felt comfortable admitting this, we cannot be sure how far along negotiations have proceeded.
Papis briefly raced in Formula 1 before establishing himself in CART Indy car racing with a 116-race career that included three wins and eight other podium finishes. As well as almost 100 races across NASCAR’s three top series, the 46-year-old Italian accrued five Le Mans top-three finishes in cars as diverse as the Ferrari 333SP, the wild front-engined Panoz LMP1 car and Chevrolet Corvettes.

Although he refused to comment on whether he had received a job offer, Papis did concede: "I would not regard it as a job. Certain things can only be done from your heart. I look at what Mr. Jean Todt does in the FIA and what Mr. Mike Helton does in NASCAR, and to me, those aren’t jobs. Sure, they get paid, but they do it because they love the sport. So if I was offered a role, that is how I would look at it.”

Arie Luyendyk is another former driver who we believe has been approached. The two-time Indy 500 winner has strong credentials and has served in the steward role before under former race director Beaux Barfield. Perhaps no less importantly, he is truculent and unflappable enough to stare down an irate driver after a contentious decision.

Interestingly, Frye’s predecessor Derrick Walker always felt Al Unser Jr. had the chops to be a smart and strong steward if allowed the latitude to be more than merely part of a committee. The three-time Indy car champion and two-time Indy 500 winner knows what constitutes proper racing ethics on road, street and oval tracks, but Unser is also – and this is very important – able to resist getting involved when a racing incident is just a racing incident. Frye has great respect for Walker’s opinion, so although he doesn’t agree with all his predecessor’s methodologies, he certainly would note DW’s approval of Little Al.

Speaking of the Unsers, Johnny Unser has served as a driver steward in open-wheel racing for several seasons – as long ago as 2008 he helped govern Race Control for the Atlantic Championship. He has sharp judgment and is hard to faze. Another strong factor in his favor is that, like his cousin Al Jr., Johnny is more than happy to fly under the radar. He's not a race steward to make a name for himself.

The current IndyCar TV commentators – ABC’s Scott Goodyear and Eddie Cheever, and NBC Sports’ Paul Tracy and Townsend Bell – could all do a fine job of making judgment calls in Race Control. But could/would any of them be prepared to step away from the “fame” of TV in order to spend a whole season probably earning less than they make their half seasons of giving opinions to the viewing public?

It’s no secret that Beaux Barfield and Walker weren’t exactly lost in mutual admiration, and Barfield was happy to leave his race director role at the end of the 2014 season. Now that Derrick has gone, would Barfield be inclined to return? At the very least, he’d surely listen to any offers. And the opportunity is also there whenever United SportsCar races don’t clash, since his deal with IMSA is on a freelance basis.

Former Indy car racer Brian Till has earned a fine reputation as a TV commentator, but also as a steward. However, in this latter capacity, he’s regarded as a highly valuable asset at Pirelli World Challenge and that surely rules him out of contention for the IndyCar gig for at least another season.

Three more sportscar candidates stand out. One is Scott Pruett who before he became an IMSA legend was developing into a rather fine open-wheel wheeler. However, his deal to develop and race the Lexus GT3 may hurt his availability. But at least the previous misgiving over his IndyCar employment – that he’d be perceived as too closely affiliated with Ganassi – is certainly no longer a problem…

The other two are slightly off the wall but Allan McNish has been a very sharp F1 steward, by all accounts, and Tom Kristensen has about as deep a knowledge of racing and racing driver psyche as anyone on the planet. Also in the favor of these two sportscar stars is their lack of baggage when it comes to assessing the current crop of IndyCar drivers or teams. Counting against these two would be 1) their prior commitments as Audi ambassadors, 2) their lack of oval racing knowledge, and 3) the sheer tedium of commuting from Europe to America for 16 weekends a year to stay in some less-than-glamorous areas. They probably got over the thrill of that back when they were on the ALMS trail.

Castroneves is fenced in