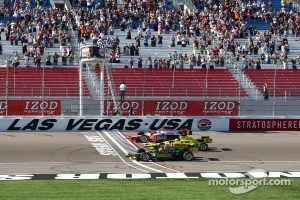 INDIANAPOLIS (Dec. 15, 2011) - A comprehensive review of the racing accident that claimed the life of Dan Wheldon is complete, INDYCAR announced Dec. 15.

"There are multiple factors that are not uncommon to racing that came together in a way that claimed Dan's life," said Brian Barnhart, President of Operations, INDYCAR. "It is a tragedy. Our thoughts and support will always be with Dan's family."

The accident review revealed that Wheldon's path on the lower portion of the racetrack was blocked by the multi-car crash he was approaching. The No. 77 car became airborne and ultimately impacted a vertical post of the track fencing. The pole intruded the cockpit, and the impact with the driver's helmeted head produced non-survivable blunt force trauma.

The response to the scene by INDYCAR's Holmatro Safety Team was rapid and decisive, according to the review.

INDYCAR analyzed data from the accident data recorders carried on board each race car involved in the crash, the on-board data acquisition system from teams, timing and scoring data, video, still photographs, physical evidence and eyewitness reports from participants. Third-party experts with Indianapolis-based Wolf Technical Services provided independent assurance that the investigation protocol, evidence examined and reviewed, and the conclusions reached are consistent and appropriate to standard scientific and engineering investigation methods.

Examination of video of the incident demonstrates normal "pack racing" that is common on high-banked ovals. However, there was almost unlimited movement on the track surface under race conditions not previously experienced that is attributed to track geometry beyond banking. Such freedom of movement outside of normal racing grooves not only increased the probability for car-to-car contact, but made it more difficult for drivers to predict the movement of other drivers. As a result, the opportunity for this incident was increased.

While this incident could have occurred at any track at any time, the dynamic of the current car and the overall track geometry at Las Vegas Motor Speedway under race conditions appears to have been one of the contributing factors in this incident.

The 34-car starting field was determined to be acceptable based on factors such as length and width of the racetrack and pit space capability. This incident and its consequences could have occurred with any size starting field at any track.

"INDYCAR's commitment to safety was enhanced by Dan Wheldon's testing throughout 2011 of the new car to be used by INDYCAR in 2012," said Randy Bernard, CEO, INDYCAR. "The 2012 IZOD IndyCar Series season ushers in an era of a new race car and the opportunity for continued safety advancements. Dan Wheldon was instrumental in the testing and development of this new car and the safety innovations that it represents. We are thankful for his efforts and commitment to racing."

The 2012 Dallara Automobili chassis enhances safety components such as side intrusion panels and wheel tethers. The cockpit is longer and wider than the decommissioned monocoque, which allows for additional padding underneath and behind the driver. Also, a "floating headrest" works in conjunction with the mandatory FHR (Frontal Head Restraint) attached to the helmet. Driver positioning allows for better sightlines.