INDIANAPOLIS (Wednesday, Oct. 12, 2011) - INDYCAR will pay tribute to the heritage of North American open-wheel racing by presenting the IZOD IndyCar Series World Championship Trophy at the INDYCAR Championship Celebration on Oct. 17 at the Mandalay Bay Resort & Casino in Las Vegas. 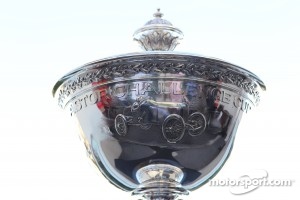 The series champion will be determined in the Las Vegas Indy 300 - the marquee event in the IZOD INDYCAR World Championships Presented by Honda -- at the Las Vegas Motor Speedway on Oct. 16. ABC will televise the event, including an expanded pre-race show, at 3 p.m. (ET).

Dario Franchitti of Target Chip Ganassi Racing seeks to secure his fourth series title - and third in a row - in the 200-lap race on the 1.5-mile oval. He leads Will Power of Verizon Team Penske by 18 points. It's the sixth consecutive year that the IZOD IndyCar Series championship has been decided in the season finale.

The trophy to be presented originally was commissioned by Vincent Astor, son of industrialist John Jacob Astor, to be awarded to the winner of the Astor Cup Challenge -- a 350-mile race on a 2-mile board track at Sheepshead Bay, N.Y.

"We sought to blend heritage and tradition with our future," said Randy Bernard, CEO, INDYCAR. "It was very important for us to find a trophy that was a piece of art that drivers would truly be honored to win. At the same time, I think it's very important for us to solidify the fact that INDYCAR is Indy car and we have placed every champion from 1909 on that trophy. We are recognizing every sanctioning body that has governed Indy car racing. It is a trophy that not only reminds us of our past but links our future."

The second and final Astor Cup race in 1916 was shortened to 250 miles. Johnny Aitken, driving a Peugeot owned by the Indianapolis Speedway Team Company of Carl Fisher and Jim Allison, won with an average speed of 104.83 mph.

Aitken, of Indianapolis, has the distinction of starting (41) and winning (15) more races at the Indianapolis Motor Speedway than any driver. A.J. Foyt is second in starts with 36 from 1958-94 and Ray Harroun is second with eight wins from 1909-1911. Aitken also led the first lap of the inaugural Indianapolis 500 in 1911, which was won by Harroun.

All Indy car national champions from 1909 (George Robertson; American Automobile Association) to the present are laser-etched into the two black granite bases of the sterling silver trophy.

In addition to the IZOD IndyCar Series and the Firestone Indy Lights champions, the Sunoco Rookie of the Year will be crowned Oct. 16. Also, reigning Indianapolis 500 champion Dan Wheldon seeks to claim the $5 million Go Daddy INDYCAR Challenge. Should Wheldon, who will start from the rear of the record 34-car field, take the checkered flag, he will split the $5 million prize with the winning sweepstakes entrant.

Dan Wheldon ready for the Challenge at Las Vegas

Team Penske ready to battle for championship at Las Vegas