1. Viso looks forward after twin top 10s in Texas: Everyone, including E.J. Viso, took notice of his drive through the field in the first race of the Firestone Twin 275s at Texas Motor Speedway when he advanced 12 positions to finish seventh. 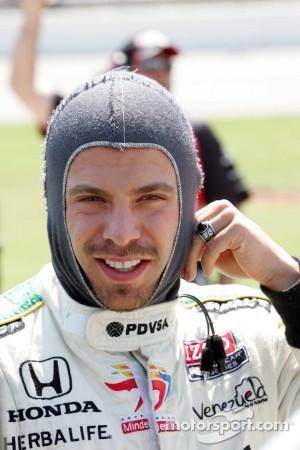 It was Viso's initial top 10 of the season. Then, after drawing the 29th (of 30) spot for Race 2 on the 1.5-mile oval, Viso repeated the charge by finishing 10th in the No. 59 PDVSA KV Racing Technology-Lotus car.

Fans noticed, and Viso will be rewarded in the Milwaukee 225 pre-race show with a $10k check after receiving the most votes on the Firestone Tire-ific Move of the Race (in this case races) poll on www.indycar.com.

The Firestone Twin 275s consisted of two races of 114 laps each with half the championship points awarded in each race. His previous best finish at Texas was 11th in 2010.

"It was great to finish in the top 10 in both races, especially coming from so far behind," Viso said. "I want to thank my team. It has been a rough start to the season, but we always knew that we had the potential and finally I was able to repay them with a good finish. In the second race it was tough starting in the last row, but I was able to gain 19 places and it was a lot of fun out there. With the race being shorter than normal though, it was hard to catch the guys up front.

"I am looking forward to Milwaukee. I think we will also be fast there. It is pretty much flat and it makes the driver work a lot in the cockpit, but it is also a good track to overtake and a very fun oval. We had a good test there a couple of weeks ago, so I am looking forward to a good race and keeping the momentum we built at Texas going."

The Noblesville, Ind., driver, who celebrated his 22nd birthday on June 15, will return to the wheel of Sam Schmidt Motorsports/CURB Agajanian's No. 77 Mazda Road to Indy/CURB Records car for the David Hobbs 100.

But the second of seven oval events in Clauson's 2011 Firestone Indy Lights campaign is far from the only racing he will do.

Clauson is slated to drive his Tony Stewart Racing car in the 100-mile USAC Traxxas Silver Crown race at Milwaukee on June 18 and his Corey Tucker Racing/BCI/Curb-Agajanian Midget in the 25-mile USAC Mopar National Midget feature that same day.

Between practice sessions, qualifying and three races, Clauson could log more than 400 laps around the 1-mile oval in his various race cars. All which are capable of taking him to victory lane.

"I think I have a great chance to win in all three series," said Clauson, whose only previous experience at Milwaukee was in the NASCAR Nationwide series event in 2008. "Milwaukee is a tricky track and you have to be precise to get through the corners and post good lap times. It's almost like a road course at times, each corner somewhat different.

"Anytime you go to a place where you've run something, it's a lot nicer. You know all the little ins and outs, and the layout of the track, and maybe some of the bumps and other things to look out for. But the three types of cars I'm racing this weekend are so different than the stock, that even the line will be quite different."

Clauson, who comes into the weekend with a 17-point lead over Bobby East in the USAC Midget car standings, finished fifth in his Firestone Indy Lights debut at Indianapolis in May. He said he's up for the challenge of jumping between cars at Milwaukee.

"The challenge of competing in the three races will be fun, with the short 25-lap Midget and long 100-mile Silver Crown distances, but the Indy Lights are a different breed altogether," Clauson said. "This weekend shouldn't be too bad from the standpoint that everything is broken up pretty nicely. We'll kind of get in USAC mode Thursday and Friday and get everything but the race out of the way, and then get back into Indy Lights mode on Saturday until I'm completely done with qualifying. 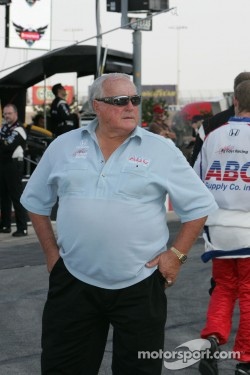 "I jump between the Midget and Silver Crown cars so much, that adjustment isn't so big, anymore. I'll just need to make sure I get in the right mindset for the Indy Lights car when I get back in it and make sure I'm thinking rear-engine and not the USAC cars. "

Even when he's not driving, Clauson's time will be in high demand off the track between appearances, engineering meetings. But there's one place he definitely plans to visit:

"I plan to spend a little time at the quarter-midget track, since the USAC Mopar .25 Midgets are part of the weekend activities," he said. "I came from quarter-midget racing and it's always nice to spend time with the youngsters who are beginning their racing careers."

3. Foyt car carries tribute to fathers: Mike Jacobi of Milwaukee, whose father Kenny was an avid fan of A.J. Foyt, approached Foyt's ABC Supply team with a personal sponsorship proposal for the Milwaukee 225 that will be contested on Father's Day (June 19).

The team normally doesn't accept such offers, but because of the special circumstances team principals decided to act upon it. When Jacobi's check arrived at the team's Texas race shop, Foyt chose to return it.

"I appreciate the work my marketing team does and they don't do anything without my approval, but the more I thought about it I couldn't take money under the circumstances," said Foyt, who was a seven-time winner at the Mile. "I never do this kind of thing because it can get complicated, but this time I made an exception. I'm glad I did."

"My father was AJ Foyt's biggest fan," Jacobi said. "Now I have been able to honor my father and other fathers who developed similar bonds with their sons and daughters through racing and who, like me, cannot be with their fathers on this Father's Day."

Jacobi spoke of his father's influence on his life.

"My dad was a good man. After Pearl Harbor, he joined the Navy at age 15. He worked 60 hours a week to provide for me and my sister," he said. "And when he retired, he did what he could to assist families in Florida that lost their fathers in the war.

"When I turned 5 years old, he took me to every race in Milwaukee and Elkhart Lake. Those races and the closeness that developed with my dad are the fondest memories of my childhood."

Many others in the IZOD IndyCar Series paddock would nod in agreement. Indeed, Foyt traces his love of the sport to his father and namesake, who owned midgets in the '30s and '40s. A.J.'s son, Larry, is the team's managing director.

The ABC Supply team will have a sign in their pit box with the names of each of their fathers above their own as a tribute.

4. Of note: Sam Schmidt Motorsports, which has three pole starts and one victory in Firestone Indy Lights at Milwaukee (with Alex Lloyd in 2007), will make its first IZOD IndyCar start at the Mile. Lloyd will drive the No. 19 Boys Scouts of America car for Dale Coyne Racing this weekend. … The race will be Alex Tagliani's 165th start in a major open-wheel racing. … Target Chip Ganassi Racing's Dario Franchitti will drive the No. 10 Downy, the fabric softener from Proctor & Gamble, car. ... Drivers will have 20 uses of the Honda overtake assist, each lasting 11 seconds, over the 225 laps at Milwaukee.

Dreyer & Reinbold Racing Geared Up For The Milwaukee Mile