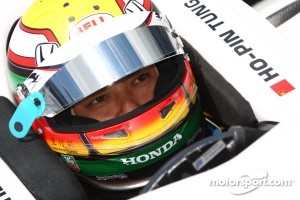 1. Schmidt, Jay Penske partner for Sonoma entry: Ho-Pin Tung will become the first driver from the People's Republic of China to race in the IZOD IndyCar Series when he takes the green flag in this weekend's Indy Grand Prix of Sonoma at Infineon Raceway in Sonoma, Calif.

Tung, from Wenhou, China, will drive the No. 88 Mouser.com Dallara/Honda/Firestone for Schmidt Dragon Racing. He tested the car at a test with the team last week at Infineon Raceway.

"The track is very technical, with many differences in height, really challenging," Tung said. "This circuit requires an intelligent approach. I am very excited about the chance being offered by Mouser, Motegi Wheels and other partners to race at Sonoma."

The 28-year-old Tung sought to become the first Chinese driver to compete in the Indianapolis 500 this past May. Though posting competitive times in practice in a Schmidt Dragon Racing car, a crash on Pole Day ended his attempt to qualify for the 100th Anniversary Indianapolis 500. He sustained a concussion in the crash, ending his Month of May.

"I am thrilled that we were able to give Ho-Pin the opportunity to get into an IndyCar again this season," said Dragon Racing owner Jay Penske. "After showing so much promise in Indy this past May, I can't wait to see what he can do in Sonoma."

Tung is currently in his second year as a Formula 1 test driver for the Lotus Renault GP team and has helped develop the team's 2011 R31 car. He started his racing career in karts at age 14 and quickly moved up through the open-wheel ranks, doing most of his racing in Europe. In addition to winning the Asian Formula BMW championship in 2003, Tung won the German Formula 3 championship in 2006. He has more than 20 wins in various rear-engine formulas.

He also tested an IZOD IndyCar Series car last fall in Sebring, Fla., with the former FAZZT racing team that is now Sam Schmidt Motorsports (SSM). The test was funded by Bowers & Wilkins, sponsor of SSM's No. 77 IndyCar team.

"Our team is pleased to have been able to facilitate this program for Ho-Pin Tung that gives him another shot in 2011," said Schmidt. "He was the model of consistency at Indy. It was a shame he couldn't compete in that event, but we are thrilled to be partnering with Dragon Racing to make this happen. Also, I want to thank Mouser.com for providing the resources that will enable the first Chinese driver to compete in IndyCar history."

Major General Mike Myatt has been named Grand Marshal of the race weekend and will take part in issuing the most famous words in racing, "Drivers, Start Your Engines."

Among his many honors, Myatt commanded the 1st Marine Division during Operation Desert Shield and Desert Storm (1990-91). His unit defeated seven Iraqi Army divisions and also liberated Kuwait City. Myatt, who retired from the Marine Corps in 1995, also served two tours in the Republic of Vietnam. Myatt, a San Francisco native, is currently the chairman of the San Francisco Fleet Week Association, as well as President and CEO of the Marines' Memorial Club in San Francisco.

The United States military will be saluted in many other ways on race day, including:

Pre-race ceremonies will boast the unfurling of two large American flags, one by the United States Coast Guard and the other by the California Army National Guard. A joint services honor guard with representatives from all branches of the military will also be featured.

Members of the Band of the Golden West from Travis Air Force Base will perform the national anthem, as well as God Bless America.

The Patriots Jet Demonstration Team will perform a six-jet air show during pre-race ceremonies. Most of the pilots are former members of the United States military.

The Coast Guard will host a special fly-by with a C130 Hercules and two H-65 Dolphin helicopters moments before the green flag is dropped on the Indy Grand Prix of Sonoma.

3. Ribbs returns to racing at Baltimore: Willy T. Ribbs, the winningest African-American driver in history, will return the cockpit of a racecar for the first time in a decade to compete in the Firestone Indy Lights race at the inaugural Baltimore Grand Prix on Labor Day weekend.

Ribbs will drive for the team that carries his name, Willy T. Ribbs Racing in Baltimore. He said he decided to jump back behind the wheel after coaxing from friend and business partner Chris Miles of Starting Grid, Inc.,

"Even though I have been out of the car for 10 years, I have never 'officially' retired," Ribbs said. "Chris said he got the idea for me to race again when he heard Wally Dallenbach say during an IndyCar broadcast that he was going to drive a Lights car in Edmonton.

"For whatever reason, Wally didn't do it, but the more Chris kept talking to me, the more I got pumped up about racing again, and Baltimore is the perfect place to do it. I'm sure the consensus will be that I should not be racing against these young guns, but as Chris reminded me - when the [Sprint] Cup boys come down and race in the Trucks and Nationwide Series, no one seems to mind. So I told Chris, 'Done deal, I'm in!' "

Miles, a principal in Willy T. Ribbs Racing, facilitates opportunities for minority participation within all facets of the motorsports industry through his company Starting Grid, Inc., In partnership with American Honda, Starting Grid, Inc. facilitated the formation of Willy T. Ribbs Racing,which debuted in May in the Firestone Indy Lights Freedom 100 at Indianapolis Motor Speedway with driver Chase Austin.

"I wanted to honor Willy the best way I knew how," Miles said. "To me, I don't think a lot of people remember what Willy meant to minorities who aspired to be involved in the motorsports industry. Having him race in Baltimore is my way of saying, 'Thank You!' "

"I know the naysayers may believe that this is actually a conflict of interest, and that Willy doesn't need to negate the further development of Chase Austin and Starting Grid's newest driver, Wyatt Gooden, but that could not be further from the truth," Miles said. "This is truly a celebration of Willy's accomplishments and talent, and his active participation is very necessary for us to receive this exposure for our continued growth."

Speedway president Eddie Gossage announced the track's schedule during a "No Limits" fan event at The Palladium Ballroom at Gilley's Dallas on Aug. 23.

The Firestone Twin 275s -- the first twin races in IZOD IndyCar Series history -- will be held June 9. Dario Franchitti of Target Chip Ganassi Racing and Will Power of Team Penske, who are locked in a series championship duel, each earned a race victory this past June.

"We revamped the majority of our schedule in 2011 in an effort to give our fans some variety and uniqueness to our season, and they wanted very much of the same for 2012," Gossage said. "The first-ever Saturday night (NASCAR Sprint) Cup race was a big success, the IndyCar twins format added a unique twist and the day-to-night appeal of the AAA Texas 500 for the Chase remains a fan favorite in the fall. The Texas Motor Speedway season has a little of everything for our fans."

Start times for each event will be announced at a later date.