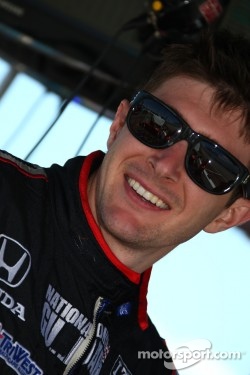 1. Hildebrand to return to Panther Racing with two-year extension: Panther Racing has exercised its two-year option on JR Hildebrand's contract, ensuring he will drive the No. 4 National Guard entry for the 2012 and 2013 IZOD IndyCar Series seasons.

His first full season was eventful, highlighted by a runner-up finish in the Indianapolis 500. A week later, he tore the ACL in his left knee during a media event at Texas Motor Speedway, but bounced back two weeks later and recorded his best career qualification effort (fourth) at Iowa Speedway. In September, he broke a bone in his hand during an incident in the Baltimore race, but again responded the following race with a seventh-place result at Twin Ring Motegi. He also suffered a bruised sternum and a concussion in a crash at the final race of the season.

"The true test of any athlete is how they handle adversity, and I couldn't be more impressed with how he handled himself during the course of this season. Everybody at Panther has learned a lot from the soldiers in the National Guard, and it's great to see how well Hildebrand represented all those soldiers. We've all got our work cut out for us for next season, and we're very pleased that JR is going to be a part of that."

Hildebrand had knee surgery after the season to repair the torn ACL and is not expected to miss any off-season testing. He is scheduled to test the 2012 Dallara chassis for Chevrolet in early December.

Hildebrand, a Sausalito, Calif., native, signed with Panther Racing in December after a two-day driver evaluation test at Phoenix International Raceway. He was the 2009 Firestone Indy Lights champion and prior to coming to Panther made two IZOD IndyCar Series starts with Dreyer & Reinbold Racing during the 2010 season.

"I'm super stoked that I'm going to be back at Panther for the next two years," Hildebrand said. "It was a crazy year for us, but we had some really strong runs and I enjoyed being a part of this team.

"I worked really well with my engineer David Cripps this season and I know everybody is already working really hard on improving for 2012. And I'm especially excited to be able to continue to work with the National Guard; that was a special opportunity and it was a very educational experience for me. To see the sacrifices these soldiers make and to realize that they've entrusted us to tell their stories and represent them is an honor for all of us.

"Everybody at Panther is excited about getting started on next year and especially looking forward to getting back to the Indianapolis 500 so we can avenge our battle scar."

Kimball, 26, from Camarillo, Calif., is the first licensed driver with type 1 diabetes to compete in the IZOD IndyCar Series. Diagnosed in 2007, he monitors his blood sugar before, during and after each race. Kimball utilizes the Novo Nordisk insulin Levemir and NovoLog to help manage his diabetes, administering it with a prefilled insulin pen device called FlexPen.

"After an exciting first year, we are extremely proud to continue our partnership with Charlie Kimball and Novo Nordisk Chip Ganassi Racing," said Camille Lee, Corporate Vice President, Diabetes Marketing at Novo Nordisk. "This team represents a unique opportunity for us, as a pharmaceutical company, to raise disease awareness on a broader scale and show everyone that diabetes doesn't need to slow you down."

"My partnership with Novo Nordisk is very unique because they make the insulins I take every day and they produce the delivery device I use to manage my diabetes," Kimball said. "I am fortunate to have Novo Nordisk and Chip Ganassi Racing support me in my career and I am proud and honored to be associated with these two outstanding organizations."

Novo Nordisk has been actively involved in providing information about diabetes awareness at INDYCAR events through the "Drive the Switch" program and the "Race with Insulin" campaign.

"It speaks volumes that a company like Novo Nordisk is making this type of long-term commitment to our team, to Charlie, and the IndyCar Series," team owner Chip Ganassi said. "Charlie has done everything that we have asked of him on the track and we certainly feel his future is bright. As for Novo, they have been a tremendous partner both on and off the track."

The drivers will visit Detroit to celebrate tickets going on sale and will be on site at the Grand Prix office in downtown Detroit to field calls from ticket buyers and help sell tickets to the event during the morning.

"In both 2007 and 2008 the Grand Prix welcomed over 100,000 fans to Detroit over the course of the three-day weekend," said Bud Denker, Event Chairman of the Chevrolet Detroit Belle Isle Grand Prix. "This is a great event for the Motor City and all of southeast Michigan and we will provide even more family entertainment and great racing for our fans as we bring the Grand Prix back to Belle Isle. Our region has been through some difficult times the past few years and we are excited to keep ticket prices the same as they were four years ago and we encourage everyone to secure their seats early and take advantage of the opportunity to buy your tickets from Helio or Will on November 22nd."

Tickets for the 2012 Chevrolet Detroit Belle Isle Grand Prix will go on sale to the public on Tuesday, Nov. 22, 2011 and prices will remain the same as they were four years ago for the last Grand Prix event in Detroit.

World-class auto racing will return to the Motor City the weekend of June 1-3, 2012 as the Chevrolet Detroit Belle Isle Grand Prix will roar through the streets of Belle Isle Park for the first time since 2008. The action-packed weekend will feature four premiere racing series competing on the 2.1-mile road course at Belle Isle. The cars of the IZOD IndyCar Series, the GRAND-AM Rolex Sports Car Series, the Pirelli World Challenge Championship Series and the Firestone Indy Lights Series will all race at the Grand Prix to wave the green flag on summertime in Detroit.

Tickets for the three-day event can be purchased by calling 1-866-464-PRIX (7749), by visiting the Chevrolet Detroit Belle Isle Grand Prix office located in suite 2311, above the Wintergarden in the GM Renaissance Center in downtown Detroit or online at www.DetroitGP.com beginning Nov. 22.

4. Clauson renews scholarship with second USAC drivers title: Bryan Clauson will get another season as an INDYCAR racer.

The USAC short-track standout clinched his second USAC National Drivers Championship - and the scholarship to compete in Firestone Indy Lights - with a sixth-place finish in the USAC Sprint Car race at Giant Chevrolet Kings Speedway in Hanford, Calif.

"It was a busy year with a lot of ups and downs, and to lock down and get the job done late in the year to put this thing away was just awesome," the 22-year-old native of Noblesville, Ind., said. " I couldn't have done it without my great car owners, Tony Stewart, Mike Curb, and Corey Tucker or all the great crew guys that I get to work with."

Clauson will try to become the first driver since Billy Boat to win three-straight Turkey Night Grand Prixs at Irwindale, Calif., later this month, as well as lock up his second consecutive USAC Midget title. He will officially receive his $40,000 prize and his INDYCAR scholarship for winning the National Drivers Championship at USAC's "Night of Champions" Banquet on Dec. 9 in Indianapolis.

Until then, he said he'll work with INDYCAR officials to determine how best to utilize the scholarship for 2012.

"I'm really excited about moving forward on the Indy Car side of things," he said. "We had already been hard at work trying to put something together without the scholarship and had some great meetings, so I feel like the scholarship will only help solidify whatever program we put together.

"As far as a direction for where I'll land for sure, I think it's too early. Obviously I have an idea of where I'd like to land, but there are a lot of people involved in the scholarship program that we need to make sure we take care of. When I get home from this west coast swing after Turkey Night, you can be sure that I will be back hard at work to put a solid program together whether it ends up being on the Lights side or the IZOD IndyCar side."