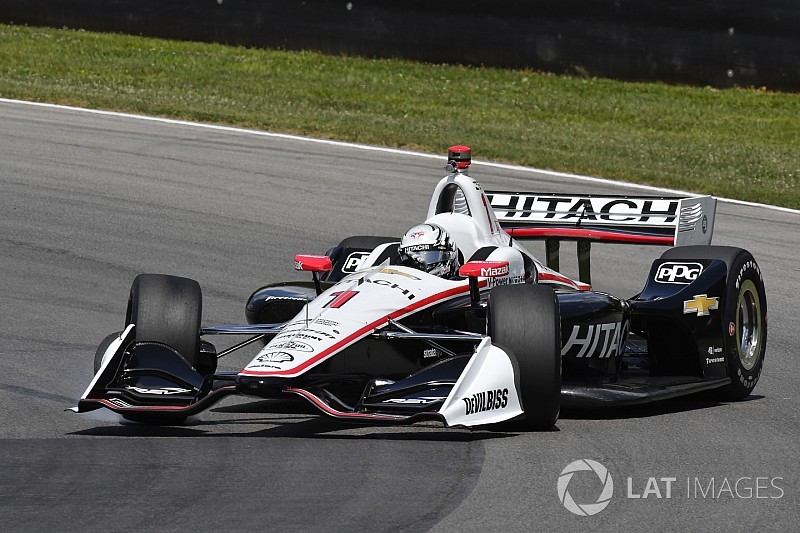 Ryan Hunter-Reay and Scott Dixon have praised IndyCar’s 2018 spec aerokit around the Mid-Ohio SportsCar Course, as less drag and less downforce have given them more work to do in corners.

Although losing the downforce provided by the manufacturer aerokits of 2015-’17 has affected the momentum that drivers can build from Turns 4 through 9 and again at the Carousel of 12/13, the major reduction in drag with the spec aerokit has seen acceleration and terminal speeds leap on the straights from Turns 1 to 2 and from 2 through to 4.

The best cars on the longest ‘straight’ from T2 to T4 were braking from 179.5mph during qualifying this year, compared with 170.5mph in 2017. This helps explain why Alexander Rossi’s pole-time this weekend was just half a second slower than Will Power’s pole from last year, despite the relative lack of downforce and higher terminal speed forcing drivers to start their braking earlier from a higher top speed and also get down to a lower apex speed.

Several red flags and yellow flags through practice and qualifying have indicated this formula has made the 2018 IndyCars more difficult to drive.

“It is kind of interesting that we are going as quick as we are with the lack of downforce,” said Dixon, a five-time winner at Mid-Ohio. “It's a lot of fun to drive.

“It’s tricky when you miss by a little bit. It's obviously magnified now and become a bigger problem. I think that's not just for straight-out speed but consistency throughout the race. Making a small mistake with last year's car, you could piece it together and still be fine, keep it on the track. In the test last week, I crashed twice. If you miss by a little bit, it magnifies and becomes a big problem.”

Added Hunter-Reay, “It's still an open-wheel car, right? You're relying on the downforce. Once you get it into the yaw at a certain angle, you're dumping all that air off the wings. It does give you a little bit more warning than the previous car did, no doubt.

Explaining the spins and incidents on Friday, the Andretti Autosport driver added: “Right now we're just dealing with a low grip situation. Sometimes Mid-Ohio is that way. I think we're dealing with a lot less downforce and a pretty finicky Mid-Ohio racetrack at the moment.”

Asked if he was expecting more mistakes from drivers on raceday, and therefore more full-course cautions, Team Penske’s Will Power responded: “I don't know. Feels like this year there’s been more green[-flag laps] than ever because of the quality of the drivers in the field now. There's no one bad. People don't make mistakes. Just got tighter and tighter in that respect [compared with when] you’d kinda rely on other people’s DNFs to gain points. It just doesn't happen. People don't have bad days.”

Teammate Josef Newgarden agreed, stating: “Iowa is a good place to look at. You would have thought there would have been many wrecks before the race with how difficult it was, but not a lot of people wreck their cars.

“I think it's also a product of how the car drives now,” he continued, going on to contradict Dixon’s view. “They’re a lot more forgiving in a good way. The car talks to you so much more. It's difficult to drive, but it is also easier to recover from a mistake.”