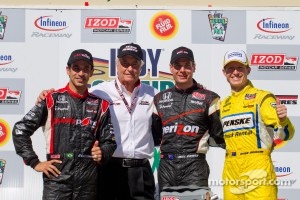 MOORESVILLE, N.C. (November 3, 2011) – Team Penske will keep its three-car lineup in place next season as the most successful team in the history of North American open-wheel racing will return to the track to compete for the 2012 IZOD IndyCar Series championship.

Helio Castroneves, Ryan Briscoe and Will Power will all return to Team Penske next season, keeping in place the same driver lineup that the team has fielded since 2009. Next season will mark the third consecutive year that Team Penske will compete with three full-season IndyCar entries. Since 2009, Team Penske has generated an impressive 21 wins and 28 poles in IZOD IndyCar Series competition between the three drivers.

“We are excited to return with a three-car team in 2012,” said Tim Cindric, President of Penske Racing. “The combination of Helio, Ryan and Will has been a formidable one on the track and they work very well together as teammates. Our goal all along has been to continue running three cars and thanks to our terrific partners, we have been able to make everything work from the business side. Now, all of our focus will be on developing the new Chevrolet IndyCar and getting ready for a strong return to the track in 2012.”

Team Penske expects to make several sponsorship announcements in the next few months it prepares for the 2012 season.

Penske Racing is one of the most successful teams in the history of professional sports. Competing in a variety of disciplines, cars owned and prepared by Penske Racing have produced 348 major race wins – including a record 15 Indianapolis 500 victories, 411 pole positions and 23 National Championships. For more information about Penske Racing, please visit www.penskeracing.com.