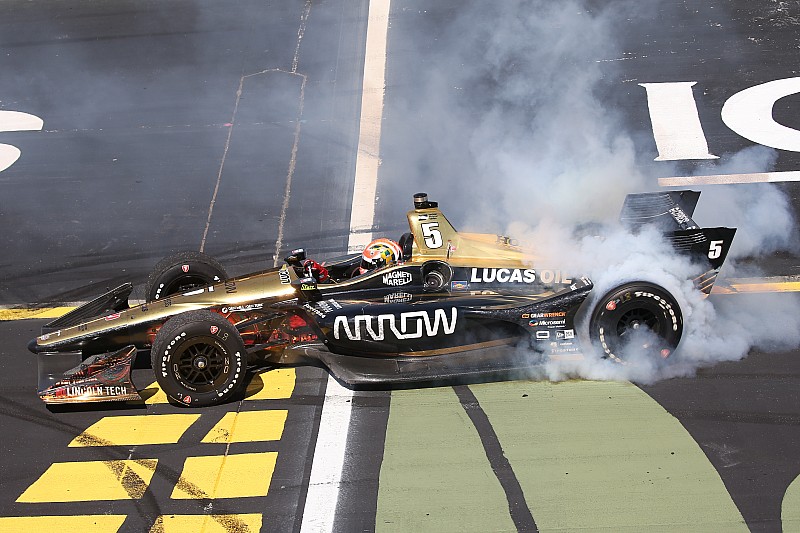 James Hinchcliffe scored his and Schmidt Peterson Motorsports-Honda’s first win of 2018 at Iowa Speedway, while Josef Newgarden, who led 229 laps, lost second place when he pitted under the final caution which never lifted before the checkers.

Polesitter Will Power took the lead at the start after rebuffing the challenge of his Team Penske-Chevrolet teammate Newgarden, while Ryan Hunter-Reay (Andretti Autosport-Honda) was forced to defend from the third Penske of Simon Pagenaud – who then lost fourth to another Andretti car, that of Alexander Rossi on Lap 2… only to come back around the outside of him on Lap 4.

On Lap 9, Jones dived down the inside of Wickens to grab seventh, and soon Wickens’ SPM teammate Hinchcliffe had done the same and also demoted Jones. Hinchcliffe then kept improving, passing Dixon and Rossi by Lap 20.

On Lap 24, having washed up the track behind the soon-to-be-lapped Marco Andretti, Power lost momentum and had to cede his lead to Newgarden. Another Penske driver to lose his spot was Pagenaud who was passed by the flying Hinchcliffe, who on Lap 39 also passed Hunter-Reay for third.

Hinch's next target was Power who he zapped past at the start of Lap 41 but he was already 8.2sec behind Newgarden. The flying leader managed to put a lap on Dixon by Lap 50, Scott having sunk to 10th in the running order.

The next championship contender to hit trouble was Rossi, who was suffering snap oversteer, and fell behind WIckens, Veach, Sato and the Ed Carpenter Racing-Chevy of Spencer Pigot.

Jones was the first of the frontrunners to stop, and Rahal, Pagenaud and Carpenter did the same on Lap 70. Such was the speed difference on fresh tires, they swiftly unlapped themselves from leader Newgarden.

Hunter-Reay, Veach, Hinchcliffe all pitted just past the 75-lap mark, while Newgarden stopped on Lap 80 along with Power – who he'd been just about to lap – and Wickens. Then it was Dixon’s and Rossi’s turn, but the Andretti Autosport driver stalled and had to be bump-started and fell a further lap down.

Newgarden emerged in front of Hinchcliffe by 4.5sec, with Pagenaud a similar distance behind, chased by Hunter-Reay, Pigot and Sato. Power was the one who’d missed out badly by not pitting sooner for fresh rubber that was making 10-12mph difference, while he’d been unable to keep pace with the leader. The reigning Indy 500 winner tumbled to 10th briefly, before climbing to 7th by Lap 90.

On Lap 107, Power had to be firm to keep Newgarden behind and stay on the lead lap as he struggled to get around Dixon. Meanwhile the other Ganassi car of Jones, having given up on a three-stop strategy, had made his second of four stops for fresh tires and flew past all three of them. Wickens would then demote Power to eighth.

Up front, Newgarden’s lead over Hinchcliffe held steady at around 4.5sec, but Pigot had now soared up to third by Lap 125, while just behind Sato passed Pagenaud for fourth, and Hunter-Reay struggled to hold back Wickens.

On Lap 139, out came the yellow for the first time. Veach, who’d caught fire briefly in pitlane but had regained his composure and passed Power for eighth, drifted up into the gray in Turn 4 and smacked the wall.

On Lap 142, the pits briefly opened and Newgarden, Hinchcliffe, Pigot and Sato pitted from the top four places, while the others stayed out to get back on the lead lap. The pits were then closed again, and IndyCar Race Control took the opportunity to sweep the track of the rubber marbles, and the remainder of the field stopped when the pits reopened on Lap 146.

Following the stops, the order was Newgarden, Hinchcliffe, Pigot, Sato, Pagenaud, Hunter-Reay, Power, Wickens, Carpenter, and Rahal. The restart saw a lap-and-a-half of side-by-side action between Pigot and Hinchcliffe, briefly resolved in favor of the ECR driver, before Hinchcliffe got back ahead on Lap 153. Wickens, meanwhile, got around Power and, a couple laps later, Hunter-Reay, to claim sixth.

Hinchcliffe, having shaken off the Pigot challenge, closed in on the hitherto-dominant Newgarden.

On lap 164, Power dived past Hunter-Reay to snatch seventh but rapidly all eyes switched nearer the front of the field, because on Lap 171, Sato almost rubbed wheels with Pigot as he went down the inside of the ECR car through Turns 3 and 4. The move stuck and the RLLR driver was into third.

Seven seconds ahead of these two, Hinchcliffe was running one second behind leader Newgarden, able to close the gap only through traffic, while Wickens drove around the outside of Pagenaud just a handful of laps later. On Lap 208, Hunter-Reay took back his seventh place from Power; on Lap 214, Hinchcliffe had a major wobble through Turn 4, allowing Sato up into second, and leaving the SPM driver under pressure from Pigot and Wickens.

Hunter-Reay and Pigot dived into the pits on Lap 222, and Hinchcliffe, Newgarden, Power, Wickens and Sato would soon follow suit.

The big winner in the pitstop shuffle was Pigot, who moved into second ahead of Hinchcliffe, Wickens and Sato. The loser was Hunter-Reay who had to pit again and fell three laps behind. The three-time Iowa winner would then make several more stops before he retired 20 laps from home.

On Lap 250, with 50 to go, Hinchcliffe passed Pigot for second and set about closing the 1.3sec gap on Newgarden who he caught as they hit traffic. When Penske #1 couldn’t get around the Penske #12 of Power who was eager to stay on the lead lap, Hinchcliffe made his move down the inside of Newgarden at Turns 3 and 4 and snatched the lead of an IndyCar race for the first time since Phoenix in April.

As tire grip ebbed away in the closing 25 laps, Pigot fell back and Wickens grabbed third, while Power and Rahal went past Pagenaud in traffic. Then out came the second yellow of the day – with just seven laps to go – when Carpenter got sideways at Turn 2, and had his front wing run over by Sato, leaving an endplate on the track.

When pitlane opened, Newgarden, Wickens, Rahal, Pagenaud and Carpenter all stopped, taking a chance on having enough laps left to take advantage of their new tires. However, there wasn’t enough time to get back to green, and so the stoppers simply and needlessly gave up track position.

Hinchcliffe ran out the winner ahead of Pigot – who scored by far his best ever IndyCar finish – with Sato ahead of the gutted Newgarden, Wickens, the lapped Power, Rahal, Pagenaud, Carpenter and the recovering Rossi. Dixon was four laps down in 12th.

However, following an examination of the results, Rossi was moved ahead of the damaged Carpenter and into ninth.