A.J. Foyt Survives Brush with Death--Again WALLER, TX August 3, 2007 -- In the '60's, A.J. Foyt was nicknamed "Super Tex" because of his dominance on race tracks across the country. Now they can call him "Houdini." Unlike the famed ...

Unlike the famed magician, however, Foyt escaped from his watery grave.

Foyt, 72, cheated death once again in a lifetime chronicled by close escapes. Late Thursday afternoon his bulldozer plunged sideways into a lake as the bank gave way under the 35,000 lb. machine. He had been working the dirt on the lake's edge which was about three feet deep at that location, that is, until the bank gave way.

For the man who survived one of the most dangerous periods in motorsports (although not without some telltale scars) in his 40-year career as a race driver, Foyt has been sorely tempting fate as a rancher lately.

Two years ago on August 6th, Foyt was attacked by Africanized killer bees while clearing some brush on another piece of land. With over 200 stingers in his head alone, Foyt came as close to death as he ever did in a race car. Reminiscing at a press dinner this past winter he said, "I was probably the most scared in my life. I was like, 'Just finish it off.'"

This most recent accident ranked right up there on his personal fear factor scale.

"It was such a helpless feeling when that dirt broke away and I was going down and down," said Foyt, who estimates the bulldozer dropped upside down into the lake about 15 feet.

"The dozer had a steel cage on it which probably saved my life," said Foyt, "because without it, the dozer would have crushed me. But the cage also made it hard to escape. I had to crawl through the front of it and it was hard to do under water with all my clothes on and with my bum legs and all. I'll be honest, I was panicked a little bit.

"If I hadn't made it to the top of the dozer, they would never have found me because it was completely under water. I didn't want to swim to the bank 'cause it was covered in vines and steep and I was already out of breath from getting out of the dozer. I knew I'd get too tired trying to haul my big butt outta there. But as I was calling for help, I saw a water moccasin [snake] swim by. I started splashing like hell then. After about 15 minutes someone heard me and stopped to help."

Once on land, Foyt, who did not go to the hospital, spent the next four hours trying to get his bulldozer out of the lake. Three wreckers later, the dozer was finally pulled out. He plans to have it trucked to his race shop today.

Foyt won't have too much time to contemplate his latest brush with death. Later today he will be jetting to Michigan where his ABC Supply Racing team will compete in what may be the final IndyCar race at Michigan International Speedway Sunday. Englishman Darren Manning is driving the No. 14 ABC Supply Dallara/Honda which currently sits 13th (!) in the point standings.

It's been an eventful year for the famed Houstonian who is celebrating his 50th anniversary in Indy car racing. Last month, his Austin lake house on Lake Travis was flooded -- a result of the heavy rains that plagued central Texas. The damage was limited to the lower level as the waters receded before getting into the main living quarters of the nearly 9,000 square foot house.

"There's never a dull moment in my life," said Foyt.

This is quite true.

Some of Foyt's Memorable Moments:

January, 1950 -- Foyt nearly drowned when his boat capsized outside of Galveston; he clung to a buoy for nearly eight hours before being rescued. Foyt had put a lifejacket on earlier because he'd been cold. His buddy didn't and drowned on his 16th birthday.

January, 1965 -- He flipped down an embankment in turn nine at Riverside (CA) Raceway when the brakes failed on the Nascar stock car he was driving. The track doctor pronounced him dead at the scene but fellow driver Parnelli Jones noticed movement and scooped the dirt from Foyt's mouth that had been suffocating him. He sustained a bruised aorta and broken back among other injuries.

June, 1966 -- He became trapped in his burning rear-engine Lotus Indy car when it hit the wall at Milwaukee in practice. Suffered second and third degree burns.

Circa 1968 -- He was attacked by a lion in the infield at the fairground speedway in DuQuoin, Ill. The lion, on display while race cars qualified, broke away from its stake in the ground and lunged at onlooker Foyt, taking him down. Foyt was bruised and badly scratched. Foyt raced later that day but had to change into a different uniform after the lion inflicted multiple lacerations.

May, 1972 -- He was run over by his own race car when he jumped out of it during a refueling stop at DuQuoin Fairgrounds because the car caught fire. He sustained burns, plus a broken leg and ankle.

July, 1981 -- He nearly lost his right arm to the Armco guardrail in an Indy car crash at Michigan Speedway. He spent the autumn painting miles of fencing on his ranch as his therapy for the badly broken arm.

July, 1983 -- He crashed his stock car in practice at Daytona but won the Paul Revere 250 sports car race later that night. Woke up the next morning and could barely move--he'd broken two vertebra in his crash the day before.

September, 1990 -- He sailed off the mile-long straightaway at Elkhart Lake, WI's Road America when his brakes failed. His car crashed into a dirt embankment, missing a huge rock boulder by about two feet. He sustained severe injuries to his lower legs and feet from which he still suffers.

August, 2005 -- He was attacked by a swarm of Africanized Killer Bees while clearing land in Hempstead, TX. Sustained over 200 stingers in his head and went into systemic shock but refused to go to the hospital. 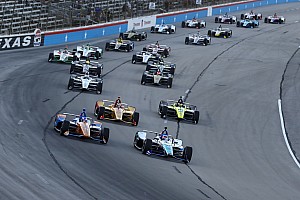