INDIANAPOLIS, July 29, 2003 - He's "the best kept secret in the sport," according to Toyota's Jim Aust, who has worked with Alex Barron since the Californian was Toyota Atlantic champion in 1997 as a rookie, just barely out of karts. A phenomenal ...

INDIANAPOLIS, July 29, 2003 - He's "the best kept secret in the sport," according to Toyota's Jim Aust, who has worked with Alex Barron since the Californian was Toyota Atlantic champion in 1997 as a rookie, just barely out of karts. A phenomenal natural talent, it's still been tough for US- born Barron to gain the kind of regular ride necessary to fulfill his desire to be a champion once more. 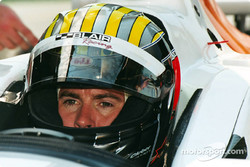 When he realized there was no future with Larry Blair's outfit for the 2003 season, "it died slow at Blair Racing," Barron went back to walking the paddock, being his own manager as he peddled his talents to teams with the desire to hire but none of the funds in a soft economy.

Barron became "Super Sub" in April, when he was hired to replace injured Gil de Ferran in Marlboro Team Penske's Panoz G Force/Toyota. Penske, ever the tinkerer, had decided to try out the Panoz G Force chassis prior to Indianapolis, in order to find out which tub to use for the month of May.

While Barron didn't set the world on fire in Japan at Twin Ring Motegi, race #3 in a 16-event IndyCar Series campaign, he did qualify 12th in the unfamiliar car, running toward the front until an accident - with Scheckter - took him out on lap 168.

After Japan, Barron tested extensively for Marlboro Team Penske at Indianapolis Motor Speedway, turning the fastest laps prior to the opening of practice, where he again found himself on the sidelines with de Ferran's successful return to competition. "We thought it might be possible Team Penske would run a third car for me at the Speedway," Barron said.

His experience with the Panoz G Force/Toyota package made Morris Nunn's decision easy when Arie Luyendyk was injured in practice for the 87th Indy 500. Barron got the call to replace the Dutchman and returned the favor by posting a 6th place finish on race day. "The cars are all new this year and I've only driven the Panoz G Force chassis. I had lots of testing miles at the Speedway for Team Penske," making his acclimatization to Nunn's outfit easier. 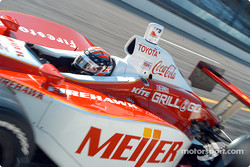 Nunn decided to keep Barron in the "family", and took him to Texas where Barron spotted for Tora Takagi, driver of Nunn's #12 Pioneer Indy car as the Japanese ace took third place. Barron continued spotting duties, all the while talking to team owners and letting them know he could be available if needed.

It was Mo Nunn Racing who again needed Barron's driving talents after Felipe Giaffone's accident in Kansas. Alex took over the #21 Hollywood entry at Nashville Superspeedway and, with little practice, turned in a workmanlike fifth place finish. While Brazilian company Hollywood would have preferred a Brazilian substitute, there was no one available to do the job and they acquiesced to Nunn's desire to hire American Barron.

This past weekend in Brooklyn, MI, Barron made a return trip to Victory Lane in Giaffone's car, winning the fastest Indy Racing League event ever held in IndyCar Series history at 180.917mph. Barron swept by Sam Hornish Jr. on the final turn of the final lap to take the fourth-closest finish in League history, with a .0121-second margin of victory.

"For my fourth drive in the IRL this year, it's pretty amazing," he laughed. "The points chase has been pretty erratic in 2003 because of the attrition. The new cars and engines are so very competitive and the drivers so aggressive this season.

"While any driver would prefer to check out and lap the field, it's so tough to break away with the current aerodynamics package," he alluded. "The Michigan race was a lot of fun. Strategy plays a big part in long races like this and we had great mileage from our Toyota engine. I knew Mo Nunn Racing had the package I could use to win."

A calculated driver, Barron knows when to be aggressive and when not to. "The engineers make most of the decisions during the race and if we have a car that can win, I'll do my best to bring it home first. If not, I'll try to get the most I can from it."

In a long race like the 200-lap, 400-mile Firestone Indy 400 at Michigan International Speedway, "You get 40-50 laps from the end and know whether you've got the balance to move to the front. We made adjustments on our pit stops and in the cockpit and started moving up after our first pit stop," Barron noted of this drafting battle, in which there were 30 lead changes among six drivers. He led six times for a total of 24 laps. 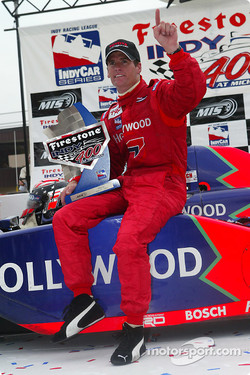 Victory lane: race winner Alex Barron celebrates.
Photo by Michael Kim.
Barron's calculations nearly came to naught on lap 164 when he had contact, once again with Scheckter. Reminiscent of the 1985 Indy 500 when Danny Sullivan executed his famous "spin and win", Barron and Scheckter got into it out of turn 4. "I was pretty upset about that, screaming into the radio that it was hit fault." Lucky or talented - or a combination of both - Barron was able to settle his spinning car, get it pointed the right direction and, when the pits opened, get new tires for the romp to the finish.

"I thought it was a pretty safe and controlled race to the end. My car worked well in traffic and I thought most everyone drove pretty well. You have to have respect and be smart when the cars are moving around" at that rate of speed. He spent much of the final 30 laps trying to figure out how to get around Hornish.

Barron chose to work the outside line on the 2001-2002 IRL champion. "Being on the outside banking at MIS, the car moves forward a bit quicker, but on the inside you have a shorter distance. We figured out we could get ahead off turn 4," he said. Pumping his fist in the air almost before start/finish, Barron "looked out of the corner of my eye and saw I was ahead. There was a little doubt but the guys came on the radio and said we'd won."

What do owners look for in a hired driver? Alex Barron has competed in 20 Indy Racing League events and has been running at the finish in 17 of those contests. "I guess I have a reputation for bringing the car home and owners look at that. I get frequent calls but I'm looking for a team that can help me get the IndyCar Series championship. I haven't been able to do that in a long time.

"Some decisions are out of your control," he admits. "You have to look at the positive side and put yourself in a place to get the [available] ride. We'll build on this," as the team goes to Gateway International Raceway in preparation for the Emerson 250 in two weeks' time. "Mo Nunn Racing gives me the support to adapt to each event. My engineer, Iain Watt is new to the Indy Racing League but David Cripps has been around for quite a while. We all work together to get quick progress."

Barron finished third in his first IRL start at Gateway in 2002. "It's a very exciting track because turns one and two are so different from turns three and four. We had the car to overtake last year and we're going to work hard to make sure we can do it again."

Once Giaffone is able to rejoin Mo Nunn Racing, it'll be back to walking the paddock for Alex Barron, to find a team where he can propel a great package to the 2004 IndyCar Series championship. "I hope my glove stays warm from now on. Every time I've gotten the shot to drive, the cars have been really strong. That's what I want to do when I go racing, go with a competitive car."