INDIANAPOLIS, May 15, 2003 - And after the tenth day, he intended to rest. Leading the time sheets for the second straight day, Tora Takagi put the finishing touches on his personal buildup to the 87th Indianapolis 500 Mile Race by executing a lap ...

INDIANAPOLIS, May 15, 2003 - And after the tenth day, he intended to rest. Leading the time sheets for the second straight day, Tora Takagi put the finishing touches on his personal buildup to the 87th Indianapolis 500 Mile Race by executing a lap of 229.157mph in the #12 Pioneer Panoz G Force/Toyota early this afternoon, on his 43rd of 75 total laps of practice. 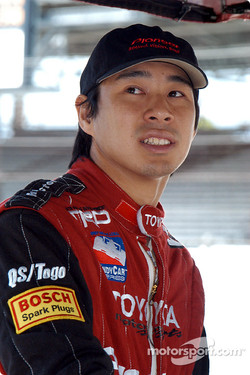 Tora Takagi.
Photo by Earl Ma.
"Our race setup is very good and I had the chance to work with the car in traffic," Takagi said. "I wish we could just keep driving until race day because I love this place so much. I will just save all of my enthusiasm and energy for the final practice and for race day."

The Japanese ace was shadowed to the yard of bricks by Greg Ray, gaining confidence in the #13 TrimSpa Panoz G Force/Honda, who logged the second quickest lap of 228.378mph on his 64th of 67 laps today.

While still learning about his car working on race setups today, "We're getting lots of miles and running on full tanks. We're finding out how many laps we can put on a set of tires and just going through the paces. I think we've had a fantastic day," the Texan said.

Takagi's teammate Felipe Giaffone, too, prepared to stand down his #21 Hollywood Panoz G Force/Toyota before Carburetion Day a week from today, logging the third quickest lap of the famed 2.5-mile Indianapolis Motor Speedway oval of 228.255mph on his 40th lap.

Giaffone "had a pretty good day once again. My engineers and my team worked some magic since the weekend and the car is to the point where it is very comfortable. You never know about this place, so you have to be ready for anything," the Brazilian explained. 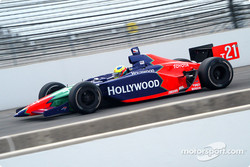 Felipe Giaffone.
Photo by Earl Ma.
Scott Dixon logged 90 laps in the #9T Team Target Panoz G Force/Toyota with his best on his 10th lap of practice at 228.169mph. Dixon spent much of the day working on full tank runs and studying the effects of different settings on his car. "We keep improving the car each time out, and I'm happy with where we're at."

Dan Wheldon spent a good amount of time during the afternoon in his #26T Klein Tools/Jim Beam Dallara/Honda following teammate Tony Kanaan, who was shaking down the #7T 7-Eleven Dallara/Honda of Michael Andretti.

Andretti again used the day to put on his team owner's hat, watching two of his four Indianapolis 500 drivers go through their paces. Wheldon logged fifth quickest time on his 46th lap of 228.128mph and ran a total of 124 laps during the six-hour practice session.

Alex Barron, who climbed into the #20 Meijer Panoz G Force/Toyota for the first time this morning spent the day getting to know the car and his new team. He placed 13th for the day with a quick lap of 226.230mph, turning a total of only 39 laps over six hours.

"Overall," Barron said, "I think it went fairly well. We have little things to work on, the normal things you do to prepare a car for both qualifying and racing here at Indianapolis Motor Speedway. We did get up to speed fairly quickly and there's not a lot of time to do all things we'd like.

"I think we've got a good package with Toyota engines and G Force chassis, which I've driven with Team Penske, so I think we're in good shape there. But then, it's all the little things." With such a short time to prepare for the race - just Friday and Saturday practice before qualifying and Carburetion Day next Thursday - Barron and his Mo Nunn Racing team have a lot of work to do.

"Getting into the show on Sunday is one thing, but having a good race car for 500 miles is something else. We're working on those things to get some angles on how to attack the race. We're doing everything we can to put it in place at the right time."

A total of 29 car/driver combinations took to the track today and the sole interruptions were for debris, track inspections and a short stop for moisture around 1:20pm. Twenty-five drivers practiced within one second and Barron was fastest of those who have not yet qualified for the 87th Indianapolis 500 Mile Race.

IndyCar: Askew to sub for injured VeeKay at Road America

O’Ward: How to beat Dixon to the championship is no mystery

Dixon: “We haven’t seen a true picture” in Indy 500 practice