During his first two seasons in the IRL, Felipe Giaffone easily proved himself to be one of the top young drivers in the series. He earned the Bombardier Rookie of the Year award with a sixth place finish in the championship in 2001, then followed ...

During his first two seasons in the IRL, Felipe Giaffone easily proved himself to be one of the top young drivers in the series. He earned the Bombardier Rookie of the Year award with a sixth place finish in the championship in 2001, then followed up strong in 2002 with his first victory at Kentucky Speedway and a solid fourth place ranking in the overall points standings.

If the recent Test in the West is any indication of how the 2003 season will pan out, Giaffone has an excellent chance to add several more accolades to his already impressive resume. 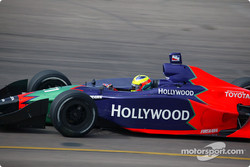 Hollywood Mo Nunn Racing's Toyota/G-Force/Firestone package was fast right out of the box at Fontana, allowing Giaffone to post the quickest overall lap time on the first day of testing. The car was also strong on the short 1-mile oval in Phoenix where Felipe posted the third and sixth quickest times respectively during a two day session.

"I'm very surprised because we haven't tested that much yet," Giaffone said. "I'd done just a day and a half at Homestead before we went to the Test in the West. First time out at Fontana the car was feeling pretty good already so I have a really good feeling with Nunn and Toyota and G- Force. I think we have the right package in our hands, now we'll have to see what's going to happen in the races."

The IRL underwent many changes during the off-season, not the least of which is a completely new set of design specifications for the IndyCar chassis. It didn't take long for the young Brazilian to get comfortable behind the wheel of his 2003 G-Force Toyota, however.

"I think the cars are safer, which is good. The IRL is always thinking in a safety point of view which makes it a lot more comfortable to the driver. The front of the car is a little bigger-you have a little bit more room for your legs.

"Last year we had little bit too much downforce for the big tracks with the G-Force-the Dallara seemed to be a little better. I think what happened with the (2003) G-Force is that maybe we have a little bit less downforce. I think Dallara's teams may be working to take some out, and G-Force needs to add a little bit more, so it's going to be very similar. The chassis this year, I think they're more similar than last year."

Another major change for the 2003 championship-one that Felipe is very much looking forward to-is the arrival of several top shelf drivers like Andretti, Franchitti, Kanaan, Brack, and Dixon. "All of the sudden I'm racing against the guys I really wished to race with a few years ago. It's going to be like Indianapolis last year with all of those drivers. It's going to be a lot more competitive as well."

The biggest change that Felipe will experience in 2003, however, most likely will not take place in an IndyCar. He has been selected to drive in the True Value/IROC Series, an experience that he admits will be completely foreign to him. He is currently at the Daytona International Speedway preparing himself for the first race of the season.