FORT WORTH, TEXAS (September 15, 2002) - Sam Hornish won the Chevy 500 at Texas Motor Speedway crossing the finish line 0.0096 seconds ahead of Helio Castroneves in front of an announced crowd of 86,000. Hornish successfully defended his Indy ...

Hornish successfully defended his Indy Racing League championship after a ten lap side by side duel with Castroneves, the only other driver with a chance to win the championship. 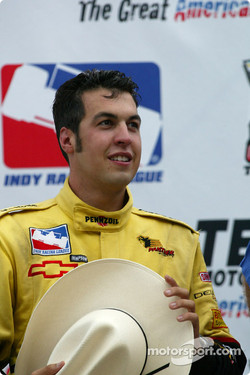 Vitor Meira, who started from the pole position, finished a career best third, one tenth of a second behind Hornish.

When the green flag dropped, polesitter Vitor Meira and Al Unser Jr. raced side by side for the first few laps setting the tone for the rest of the day. On lap seven, the fans roared as Sam Hornish nosed ahead of Unser Jr. to lead the next 11 laps.

The second yellow of the day was shown on lap 24, when George Mack lost an engine entering turn one. Mack stopped at pit out, delaying the field's first stop for service.

With a light fuel load, McGehee pulled away with a seven-car length lead until Hornish pulled behind him on lap 42. Hornish nosed under McGehee on the back stretch and forced his way around through turns three and four to lead lap 44.

Hornish and McGehee pulled away from the second pack, which was led by Alex Barron. Barron, who ended up with a fifth place finish, faced intense pressure from Castroneves and Meira.

Castroneves and Barron battled side by side for third with Meira looking to capitalize on any mistake. The battle for third allowed Hornish and McGehee to pull away further at the point. On lap 62, Castroneves was 3.3 seconds behind the leader.

McGehee was forced to stop for service under green on lap 65, giving Hornish a 3.6 second lead.

On lap 85, Hornish's crew setup for a green flag stop. The 10.7 second stop was performed flawlessly but a yellow flag for an incident between Jeff Ward and Hideki Noda was a gift for Castroneves, who had yet to pit.

Castroneves, who assumed the lead when Hornish stopped at the pits, made his pit stop under yellow and returned to the track with the lead. 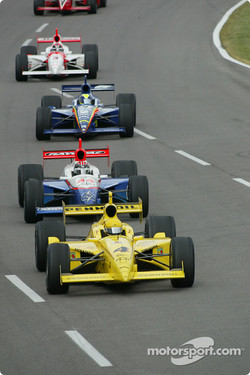 Although Hornish lined up in seventh place for the restart, he was 20th in line. He easily passed 8 cars in six laps and didn't face a serious challenge until Alex Barron who was running in sixth.

The fourth and final caution of the day came on lap 113 when one of Eddie Cheever's mirrors fell off, placing the top seven cars, all on the lead lap, nose to tail.

Hornish quickly passed the Kelley racing teammates of Renna and Sharp and set to work once again on Alex Barron.

Castroneves led with Unser under his gearbox. Five car lengths back, Giaffone and Barron ran side by side for third with Hornish breathing down their necks.

Giaffone slid back on lap 126 leaving Castroneves to battle Unser, Barron and Hornish for the lead.

On lap 142 Hornish passed Unser for second place on the backstretch. Going into turn one, Hornish moved to the outside and pulled alongside Castroneves.

The crowd came to their feet as Hornish led lap 146. Another cheer was heard as Castroneves returned the favor on the next lap.

The side-by-side duel intensified on lap 149 as the pair swapped the lead several times per lap. Hornish led lap 150 by 0.0001 seconds.

Two laps later, Hornish made his final pit stop, rejoining the race in tenth place, a lap behind the leaders.

Castroneves reported to the pits on lap 158. He was on his way 9.8 seconds later, taking the lead when Meira made his final stop.

Once the field was sorted after the final stop, Sharp, Hornish and Barron followed Castroneves.

With 25 laps to go, Hornish moved into second and set his sights on the lead.

The crowd rose once again as Hornish nosed ahead to lead lap 177. The crowd stayed on their feet as the pair raced wheel to wheel with Barron and Sharp in close pursuit.

Hornish pulled in behind Castroneves with 15 laps to go to contemplate his final bid for the lead. The championship would be his with a second place finish but the glory would so much sweeter with a victory. 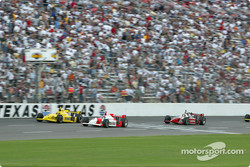 The side by side battle resumed with ten laps to go. Barron, playing the wild card, sat waiting for an opportunity. Meira joined the fray and a blanket would have covered the top four cars.

Although the official record will show Hornish leading the last four laps, the lead changed several times. On lap 199, Hornish led through the first two turns but Castroneves edged ahead in turn three. Castroneves led in turn one on the last lap, but Hornish pulled ahead by a few inches by the time the pair reached the finish line.