Crime really does not pay in the scope of things. Larry Curry, indicted and jailed for defrauding John Menard of nearly a million dollars over a three-year period, had most of his personal possessions trophies of all mien from the good days sold at ...

Crime really does not pay in the scope of things. Larry Curry, indicted and jailed for defrauding John Menard of nearly a million dollars over a three-year period, had most of his personal possessions trophies of all mien from the good days sold at auction today. 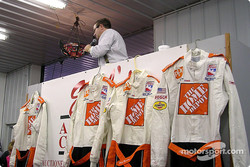 Larry Curry special auction, Indianapolis.
Photo by Anne Proffit.
It was an eye-opener on New Year's morning, as motorsports fans and participants gathered to claim items from Tri-Star Motorsports (which Curry co-owned with Tony Stewart and Indiana businessman Andy Card), Team Menard and other groups for which the veteran team manager had worked: everything from team uniforms, tools, prize boards (fake checks), banners, et al went past the gavel at Earl's Auctions in Indy.

This was the second disposal of Curry's holdings and encompassed his personal effects, which turned out to be many and expansive, as well as expensive. The man who guided Stewart to his IndyCar Series title in 1997 with Team Menard was also pilfering money from the team at the time, invoicing its billionaire owner for work that was never performed and pocketing half the proceeds.

Among the interesting items out for bid were a Coke retail dispenser with Stewart, of course on the front, clothing items from Team Menard and Tri- Star Motorsports, team uniforms and fire suits, t-shirts and polo togs, wings, helmets (some from Curry's other drivers, like the incomparable Danny Ongais), huge bedroom suites with entertainment centers, other massive pieces of furniture, a plethora of real Persian rugs, huge dining sets and jewelry, lots and lots of jewelry. 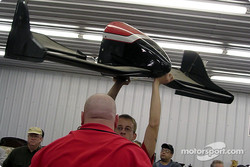 Rings, necklaces, bracelets and earrings traipsed to the front of the extremely crowded room under guard from a Marion County uniformed Sheriff. It was apparent that Curry spent a great deal of money to keep himself and his wife looking the part, including a ring with center diamond over three carats (with good clarity, cut and color), Tag-Heuer and Rolex watches, gold and platinum rings, diamond bracelets, race-car motif necklaces, bracelets and earrings.

The auction company expected the sale to continue into the late evening hours, as there were so many lots available to satisfy the Curry family's debts. While there were not many racers sticking around throughout the day, members of the community dropped in to bid on items as they emerged from their New Year's revelry. Results of the auction's total compensation for John Menard and his companies should be known by the start of next week.