INDIANAPOLIS, April 23, 2003 -- With less than five minutes to go in today's private test at Indianapolis Motor Speedway, it had been the best of days for Mario Andretti. Mario Andretti. Photo by indyracing.com/Ron McQueeney. Back in ...

INDIANAPOLIS, April 23, 2003 -- With less than five minutes to go in today's private test at Indianapolis Motor Speedway, it had been the best of days for Mario Andretti. 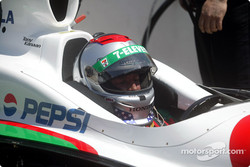 The job at hand was to shake down Kanaan's ride for the month of May while Tony rehabs his broken left arm. There's a plate inserted and, well, bone take some time to attach to surgically-implanted plates.

So 63-year-old Mario answered the call and got up to speed promptly. When the media were ordered to go (it was a private test, after all) he was lapping in the 223mph range. He looked comfortable in the car. He looked confident.

Then, with less than five minutes to go before the track closed at 6pm, Kenny Brack lost it out of one and spread debris as he went down the chute. For Mario Andretti, it then became the worst of days.

Mario collected debris as it peppered the chute between one and two. He had been in Brack's wake to begin with.

Mario flipped after collecting the inside fence. After getting airborne, he did two complete revolutions and collected some catch fence.

He landed with the rubber side down, spent a short period in the infield care center, as did Brack and was released. Mario is heading home to Nazareth tonight.

Michael, of course, was white as a sheet when news of the accident reached pit road.

The Dallara tub is a write-off, something team owner Michael Andretti will deal with tomorrow. But Mario isn't, so he can breathe again. As can we all.

Until Brack bought the wall, though, it had been a stellar test. The Andretti Green Racing team had made small changes throughout the afternoon as Mario recorded his 82 laps, dialing in the car. Andretti achieved a 225.4mph marker around the 2.5-mile oval that's been both bane and best of his existence.

"You guys made me look really good out there," Mario Andretti chimed to the crew as he left the track.

CHAMPCAR/CART: Road America back on 2003 schedule