INDIANAPOLIS (May 23, 2003) -- While Sunday is the big day at the Indianapolis Motor Speedway, Chevrolet gave many journalists the thrill of the month with pace car rides around the famous 2.5-mile speedway. After a sumptuous buffet provided by ...

INDIANAPOLIS (May 23, 2003) -- While Sunday is the big day at the Indianapolis Motor Speedway, Chevrolet gave many journalists the thrill of the month with pace car rides around the famous 2.5-mile speedway.

After a sumptuous buffet provided by the bowtie brigade, media types were led outside where a fleet of five 2003 Super Sport Roadsters sat shining in the afternoon sun with their silver ghost flames highlighting the Ultra Violet paint job. 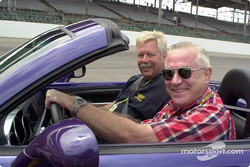 Dave in the pace car.
Photo by Greg Gage.
I waited patiently as, one by one, those ahead of me were led away from the fleet wearing huge grins and wind blown hair. One embarrassed journalist returned without his new SSR hat that had been distributed at lunch. He was provided with a new SSR hat as it was rumored to be lost somewhere between the south chute and turn three.

When my SSR pulled into the pits to pick me up, I was delighted to see Indy Racing League official Jim Haines behind the wheel.

Jim pushed the throttle bringing the 5.3 litre V8 to full song as we exited the pits. The lateral forces through the turns were easily handled by the 20 by 10 in rear tires. The speed was reminiscent of a Chevrolet Craftsman Truck ride around Nazareth last year, only smoother. The SSR was incredibly smooth as it took the turns at 85 mph and grip was never an issue.

When the Chevrolet SSR leads the racers to the initial green, it will be traveling at 110 mph, 20 faster than we reached on my ride. At one point, Jim indicated we were traveling as fast as they would during yellow flags laps on Sunday. While the 230 mph race cars look like they're crawling during caution periods, we were absolutely flying through the turns.

Jim's raceday job is riding shotgun in the pace car. He's the fellow with his right hand sticking out of the car, providing guidance to the cars behind.

On the second lap, Jim pointed out his previous race day post, a small observer's stand in the south chute. "I was there the day that Jim Crawford launched his car. I saw the bottom of his car," he said, as he demonstrated crash avoidance maneuvers.

With Jim looking away from the track, ducking and covering his head as he relived the moment as he moved to avoid Crawford's flying car, the SSR edged gracefully toward the backstretch wall. Even at 90 mph, the SSR forgave Jim for telling his vivid story of Crawford's wreck and we were quickly lining up for turn three.

The SSR is Chevrolet's first product launched to reenergize the brand. Chevrolet will be rolling out several new products in the future including the Colorado, a replacement for the S-10 pickup and the Equinox, a small utility vehicle expected to compete in the same market as the Jeep Freedom.

The SSR is expected at Chevrolet dealerships later this summer. Inventory volumes for each region have been determined allowing dealers to negotiate with potential customers. Production is expected to be 15,000 units per year.

Like all traditional American hot rods, the SSR has the engine up front with rear drive through a 4-speed, electronically controlled 4L60-E Hydra-matic transmission. The 325 cubic inch engine provides 290 horsepower at 5200 rpm. While the SSR is not going to set the world with its 0-60 run in 7.6 seconds, the bold new styling provides a high profile and heads will turn at every stoplight.

The ride was all over too soon as we were back at the north end of the pits in what seemed like a few seconds. Complete with ear-to-ear grin and wind blown hair, I went to retrieve my hat, which I had placed on the pit wall before departure. After all, I didn't want the Chevy guy to chase me down with another hat.