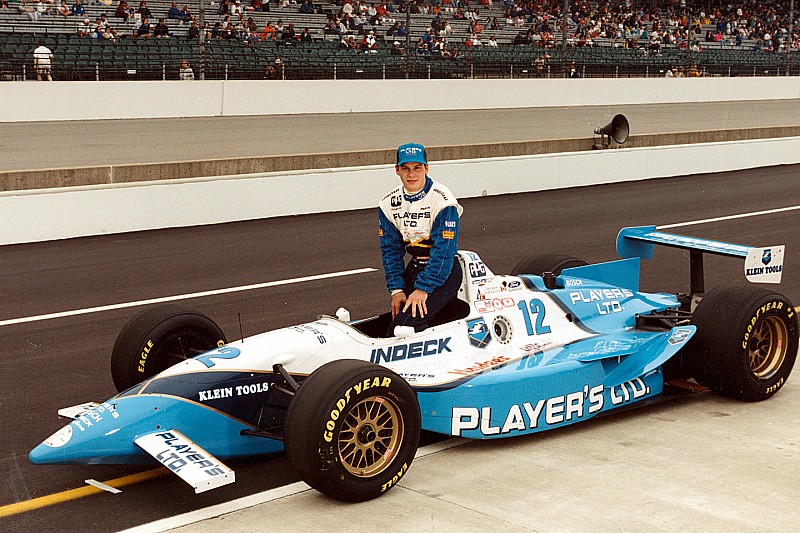 In 1995, Jacques Villeneuve entered his second season in the PPG Indy Car series as part of Team Green with sponsorship from Player’s Ltd. Brothers Barry and Kim Green headed the team with aerodynamicist Tony Cicale as the chief engineer.

Villeneuve started the season with a win in Miami and a second place finish on Nazareth’s oval. The Indy 500 was the next event on the schedule. The year before, the young Canadian stunned the onlookers by finishing second in his rookie season.

In preparation for the race, the son of the late Gilles Villeneuve qualified his Reynard-Ford in fifth place. He started the 500-miler cautiously not to be involved in an accident, and he then decided not to pit during an early yellow flag. He stayed out on the track and found himself leading the race, but not aware of it. The pace car came out to pick up the field, and by rule, was supposed to get directly in front of Villeneuve as the leader. But Villeneuve passed the pace car twice, not knowing they were trying to pick him up. The officials decided to punish him heavily with a cruel two-lap penalty.

“This made me really furious,” Villeneuve told Motorsport.com. “I was really upset, because that silly mistake was easily avoidable. The driver of the pace car didn’t even try to stop me. At that moment, the situation was pretty chaotic and no one knew for sure who was leading the race. It was amazing to screw up the Indy 500 that way. Come on, it’s the most important race of all motorsport on the planet.”

“Still, no one on the team panicked. Everyone stayed cool. Barry [Green] and Tony [Cicale] immediately came on the radio to remind everyone that this was a long race and anything could happen. I was totally confident in them. And that’s exactly for that reason that I started to take risks. The race turned into a series of qualifying laps, something that you never do at Indy. Every five or 10 laps, I looked at the timing column and I could see that I was climbing through the field.

“During the practice sessions and qualifying, we noticed that my Reynard-Ford-Goodyear was not as fast as the Honda cars on Firestone tires. However, the Reynard chassis was outstanding and our race set-up was really good. We were extremely well prepared. We just missed a bit of top-end power and a bit of rubber.”

“For the race, Goodyear had brought some experimental tires that never got tested,” Villeneuve continued. “We were supposed to put them on later in the race, but the penalty forced us to change our plans, and we decided to run these immediately after I was given the penalty. They were like qualifying tires! They provided amazing grip! I could stay really close to the other cars in traffic. The balance of the car remained perfect, which was quite impressive because I was running 225 mph. Today, you’d never see a tire manufacturer run untested tires during a race, especially at Indianapolis!

“Another advantage I had was my relatively low fuel consumption. Each stint I was doing two or three more laps than the other guys. I also had a sixth gear that I was using sometimes when drafting other cars to save fuel and to save the engine. I was also slightly lifting my foot off the throttle in some corners, just to make sure that the engine wouldn’t explode with just five laps to go.”

“One time, my tires were used to the chord. My car drifted in Corner 2, completely sideways. I asked myself how I would control such a slide and not hit anything because I could see the wall coming at me! I maintained the same pressure on the throttle, worked the steering wheel and the car pivoted back to a straight line about one foot away from the wall! I think that was a biggest and best drift of my entire career! But I really thought for the moment that it was all over. This incident calmed me down a bit…” added Villeneuve with a huge smile on his face.

“I had another wake-up call during a full course yellow later in the race. A plastic bag got wrapped around the radio antenna located on top of the chassis, above my knees. It was just lapping just in front of my eyes and it was really annoying and distracting. I couldn’t reach it with my fingers. So, during the full course caution, I slacked my shoulder belts to be able to reach forward. I suddenly realized that I had cut a good portion of the end of the belts because I did not want them to flap around at 225 mph. I stopped slacking my belt with just an inch left! If they had come off the buckle, I would have needed to stop to get them rearranged.

“With a little more than ten laps to go we got another caution. I was then running in second place behind Scott Goodyear [who was driving a Honda-powered Reynard on Firestone tires]. I told myself ‘Well, okay, I’m going to finish second again for a second time in a row. That’s good’. Suddenly, I changed my mind. Despite the fact that he was faster than me, I decided to put extreme pressure on him so hopefully he’d made a mistake. I started playing tricks on him. As we were running behind the pace car, I pulled alongside him, and then slowed down a lot and then accelerated again. I was all over the place. He suddenly stepped on the gas and went for it at full speed. But the pace car was still running on the race track. He passed it while I jumped on the brakes. I knew the rule was very clear: you never pass the pace car. I was hoping the officials would penalize him like they had punished me. It worked. I gambled big and I won!

“It was a very tough race, and this made victory even sweeter. Without that early race penalty, maybe we wouldn’t have taken so many risks. The issue of the race might have been very different. I would not had driven so hard and taken so many stupid risks. This turned out to be the only 505 Miles of Indianapolis in history. It will remain a record, a landmark.”