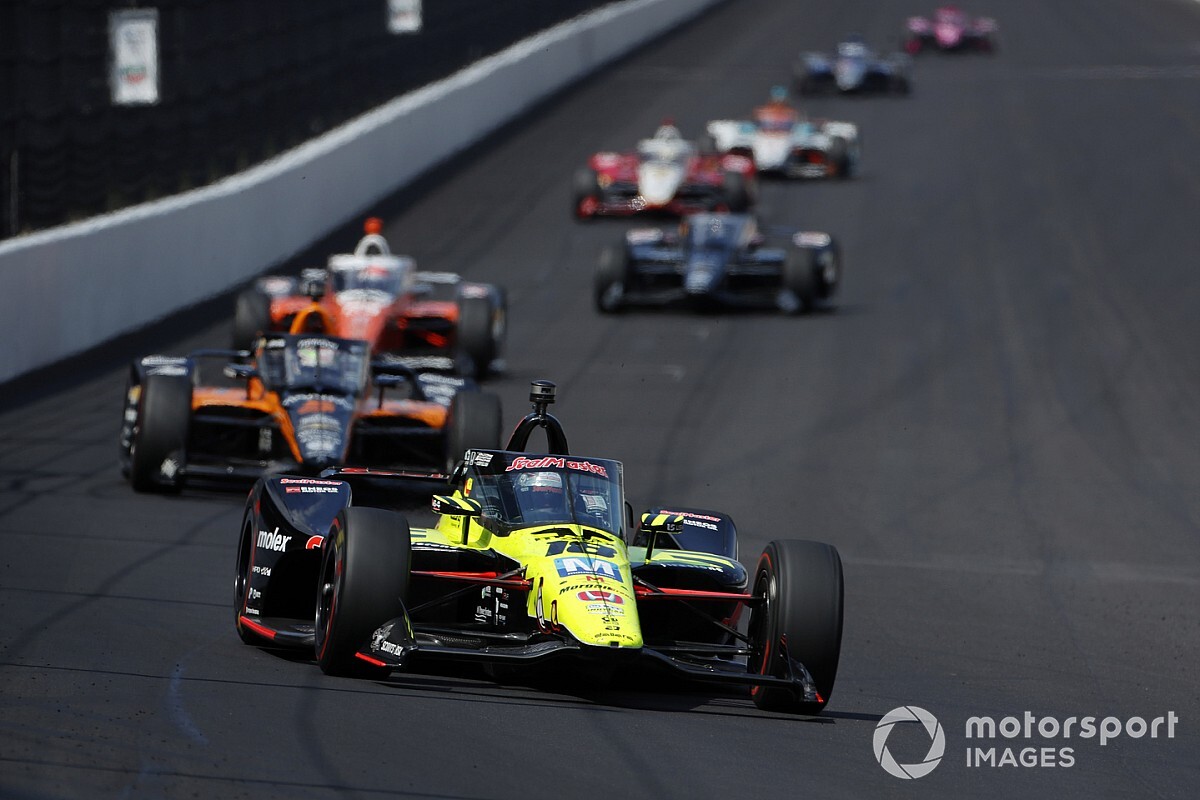 The Dale Coyne Racing-Honda team saw Santino Ferrucci star at Indianapolis with a fourth-place finish, but one of the heroes of qualifying, Alex Palou, hit the wall, while the team’s ‘extra’ car of James Davison made a spectacular early exit.

Ferrucci started only 19th, but was not only strong on restarts, he also took full advantage of the fact that his race engineer Olivier Boisson had put maximum downforce on the DCR with Vasser Sullivan machine.

That helped slow his tire degradation, and his momentum through corners allowed him to pull off some brave passing maneuvers down the inside and around the outside of vastly more experienced rivals.

“Just an incredible race,” said the 2019 Indy 500 Rookie of the Year. “The SealMaster Honda was insane today. The guys worked really hard on pit lane, on the timing stand and the strategy was perfect.

“During the first pit stop I got caught in neutral, and it was like a blessing in disguise. It set us way back, but the momentum we had just carried us. On the restart we went from 25th right back into the top-10 where we needed to be and we just fought our way into the top four.”

Palou’s DCR with Team Goh entry, which started seventh, was still within the Top 10 at half-distance when the Spanish rookie slid into the wall on the exit of Turn 1 on Lap 122 as he pursued Team Penske’s Josef Newgarden.

“I don’t really know what happened, if I was too low or too high,” he said afterward. “It’s difficult to say when you are going so quick. I had been working on getting a run on Newgarden for two or three laps because I think our car was quicker than his.

“It’s just a big shame for all the Dale Coyne Racing with Team Goh crew, Guaranteed Rate and our other sponsors that were behind us, and for me. It was my first Indy 500 and I wanted to finish. I think we had a car capable of winning.

“We’ll come back stronger for sure. When I look at my experience as a whole, it’s been awesome being here, it’s really nice to drive at this historic place, I just want to go back out there now. I learned a lot about driving. I turned so many laps and I was learning every lap. It was a lot of fun. I just wish it didn’t end the way it did.”

James Davison’s car, entered by Dale Coyne, Rick Ware Racing, BYRD & Belardi Auto Racing, ground to a halt on Lap 6 when an overheating brake caught light and set fire to the right-front wheel which then blew out its center on the back straight.

According to a team press release, “The crew radioed to Davison informing him that his front brakes were glowing bright red indicating they were engaged but, unfortunately Davison didn’t have time to make it back to pit lane.”

“Well, that’s obviously heartbreaking to go out of the Indy 500 in the first handful of laps with a mechanical issue,” said the 33-year-old Australian who has now started six Indy 500s. “I’ve got to thank my team for all their hard work throughout the event.

“Our car felt good and we had gotten by [Fernando] Alonso and I was pretty excited for the race ahead. Unfortunately, it just wasn’t meant to be, but hopefully we will be back next year with the Jacob Construction car running a bit stronger.”