Justin Wilson: I’ve got to thank everyone at Dale Coyne Racing for working so hard this weekend

After struggling with understeer in Friday practice, Justin and Dale Coyne Racing made a number of set-up improvements to the No. 19 Sonny’s Bar-B-Q Honda during Saturday’s Practice 3 and their efforts were rewarded with a 13th place qualifying spot in Sunday’s Honda Grand Prix of St Petersburg. 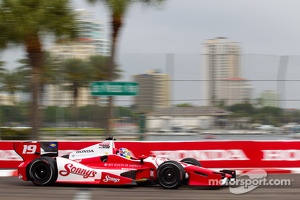 Justin was 7th quickest of the 12 cars in Group 1 in the first round of qualifying (1:02.1777s ) and was the fastest Honda-powered entry in the Group, but a continued lack of front grip left him two hundredths of a second off the pace needed to progress to Q2.

“I’ve got to thank everyone at Dale Coyne Racing for working so hard this weekend,” said Justin. “We’ve not been quick enough, but we’ve kept plugging away, trying to figure out how to make the Sonny’s Bar-B-Q Honda work with the new Firestone tire. We’re mid-pack right now, but hopefully we can keep making improvements. Our focus now is on having a strong race tomorrow.”