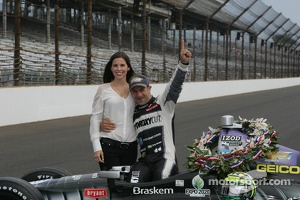 Brazil native Kanaan, who started 12th, set a record winning speed of 187.433 mph, breaking the previous mark of 185.981 set by Arie Luyendyk in 1990. Kanaan won "The Greatest Spectacle in Racing" for the first time in 12 career starts, tying an event record for earning a victory latest in a driver's Indy 500 career. The other driver to win the race for the first time in his 12th career start was Sam Hanks in 1957.

Kanaan, who led the race 15 times for a total of 34 laps in his No. 11 Hydroxycut KV Racing Technology-SH Chevrolet, won the race when he and Carlos Munoz overtook race leader Ryan Hunter-Reay entering Turn 1 on a Lap 198 after a restart.

During that restart, three-time Indianapolis 500 winner Dario Franchitti's No. 10 Target Chip Ganassi Racing Honda made contact with the wall between Turns 1 and 2, allowing Kanaan to cruise to the checkered flag under caution.

In the first IZOD IndyCar Series race of his career, Munoz, of Colombia, qualified second and finished second in his No. 26 Unistraw Chevrolet for Andretti Autosport. Munoz was voted the winner of the prestigious Chase Rookie of the Year Award.

Munoz, who owns two Firestone Indy Lights wins this season and finished fourth in the Firestone Freedom 100 on Friday, May 24, earned $964,205, which included a $25,000 bonus from Chase.

Reigning IZOD IndyCar Series champion Hunter-Reay earned $583,005 for driving his No. 1 DHL Chevrolet for Andretti Autosport to a third-place finish in a performance that saw him lead the race 13 times for 26 laps.

In driving his No. 25 RC Cola Chevrolet Chevrolet to a fourth-place finish, Andretti Autosport's Marco Andretti joined Kanaan in leading the race 15 times, the most ever by an Indianapolis 500 driver who did not win the race. Andretti, who led for 31 laps and took the IZOD IndyCar Series points lead, was awarded $469,755.

Three-time Indianapolis 500 winner Helio Castroneves earned $313,755 by driving his No. 3 Shell V-Power/Pennzoil Ultra Team Penske Chevrolet to a sixth-place finish. Castroneves led one lap in the race and has led in eight of his 12 career Indianapolis 500 starts for a total of 232 laps.

Pole sitter Ed Carpenter, who led the race six times for a race-high 37 laps in his No. 20 Fuzzy's Vodka Ed Carpenter Racing Chevrolet, finished the 10th Indianapolis 500 of his career in 10th position. He received $405,955, which included $100,000 for earning the Verizon P1 Award as pole winner.

Purse awards were announced and presented at the Victory Awards Celebration presented by Ice Miller LLP on Monday, May 27 at the Indianapolis Motor Speedway.

The 98th Indianapolis 500 is scheduled for Sunday, May 25, 2014. First run in 1911, "The Greatest Spectacle in Racing" is the world's largest single-day sporting event and most prestigious auto race.