What did Tony Kanaan learn from day one on the job?

Less than 48 hours after unveiling his bas relief image on the Borg-Warner Trophy at Indianapolis Motor Speedway, Tony Kanaan started his on-the-job orientation with his new employer, Chip Ganassi Racing, during a team test at Sebring International Raceway.

Despite joining a new team, there was familiarity for the Brazilian in his first on-track session. Longtime engineer, Eric Cowdin was on the pit stand as were drivers he considers friends. Kanaan was even familiar with the Chevrolet twin turbocharged engine that was affixed to the No. 8 NTT DATA car for the first time.

"It's my first day on the job so it's still a little weird," said Kanaan, who announced in October that he was moving on from KV Racing Technology-SH Racing after three IZOD IndyCar Series seasons. "I'm excited, obviously. It's a new challenge for me. I have a lot of things to learn as far as the way (the team) runs things here. I'm just enjoying it."

Following the morning session on the 1.65-mile track, Kanaan joined new teammates Charlie Kimball and Scott Dixon in an extended and animated debrief about the characteristic of the Dallara chassis with the 2.2-liter V-6 powerplant. Kanaan and Alex Tagliani, who was testing in the No. 10 car, brought a fresh perspective to the pit lane conversations with engineers, which prompted a smile from team managing director Mike Hull. 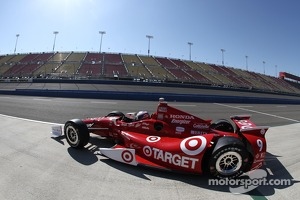 "In a way, it's a good thing that Tony's already driven a Chevrolet car because he doesn't need to concentrate on the differences between that and a Honda product," said Hull, noting the switch of engine manufacturers for 2014. "He can just concentrate on what we do as a team with the chassis. And it's kind of an interesting comparison, or dynamic, of what we have going on today because we have the Honda history, which has been a really special time in our lives at Chip Ganassi Racing for many, many years, we have that going on.

"But with Tony we also have a fresh perspective on where Chip Ganassi stands in terms of how it creates an on-track product by comparison to where he's been in the past. So it's a big day for all of us here in terms of understanding how to make our product better."

Kanaan, the 2004 IndyCar Series champion, said one of his initial goals is to add to the team's database of perspectives.

"It's a team that has been together for a long time and they've been very successful, so I'm actually trying to listen more than I'm talking," he said. "I have some things that I think I can add to it, and I'm doing whatever I can to send the message across. If I can bring something extra, to improve what they have already, it's great."

Feedback is important to the development of the Chevrolet program, according to IndyCar Series program manager Chris Berube.

"We believe these things are partnerships, with all the Chevy teams," he said. "This is our first chance to be at the track together, and it's very much about building that relationship, the trackside relationship. We've had some time prior to today to get to know each other off the track since the end of the season, but we're very excited to be here today and to have Chevy power in the Chip Ganassi Racing team camp."

Catching up with... James Hinchcliffe